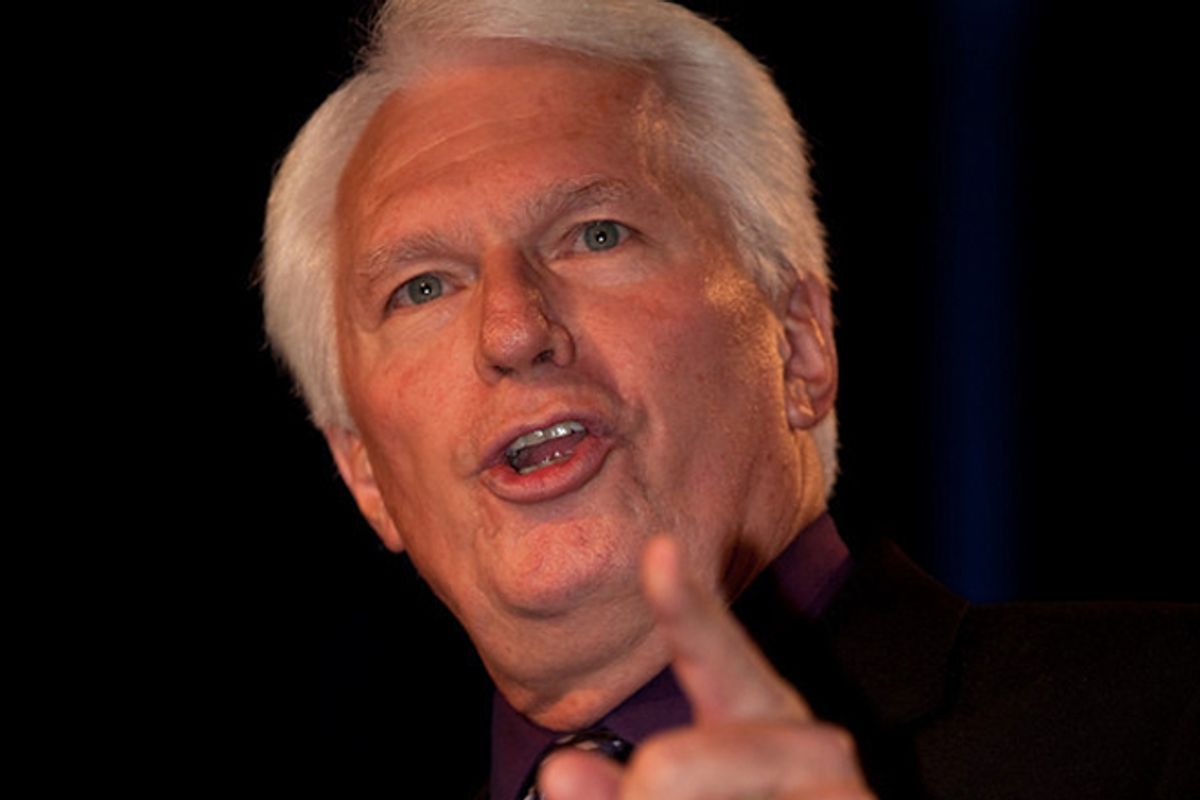 How much of an impact will culture-warrior and anti-gay obsessive Bryan Fischer have on the election? Plenty, if you take the resignation today of Richard Grenell, Mitt Romney's openly gay foreign policy spokesman, to be a casualty of the American Family Radio host's crusade against him. "I was kind of pleasantly surprised," Fischer says of Grenell’s resignation, adding, “I think Governor Romney is going to be far more careful now."

Grenell, a former Bush aide, had just last month criticized the Obama administration in the Washington Blade for not doing enough for gays and lesbians. (Grenell also came under fire from liberals for a spate of sexist tweets.) On April 20, Fischer was the first to condemn Grenell, tweeting: "Romney picks out & loud gay as a spokesman. If personnel is policy, his message to the pro-family community: drop dead."

Though his radio audience is larger, Fischer currently has fewer than 1,400 Twitter followers. But within a day Buzzfeed was on the case, asking for (and not getting) comment from the Romney campaign. Meanwhile, fellow "family values" conservatives like Tony Perkins and Gary Bauer were only too happy to agree that Grenell had to go, and Fischer started making the television rounds.

"The reason I was concerned is that this, I believe, was a shout-out on Governor Romney's part to the homosexual lobby, because he knew that Grenell was a homosexual activist," Fischer says, noting that the hire came only after several Christian right groups and the National Organization for Marriage had already endorsed Romney. "Richard Grenell could not possibly have been the only qualified individual that Governor Romney could find … If it wasn’t about homosexuality, than why did so many gay rights groups celebrate the hire?"

Upon resigning, Grenell told the Washington Post's Jennifer Rubin, "My ability to speak clearly and forcefully on the issues has been greatly diminished by the hyper-partisan discussion of personal issues that sometimes comes from a presidential campaign." So is Fischer, whose Twitter stream is a steady diet of anti-gay invective and Romney skepticism, convinced that he won?

"Governor Romney may not do the right thing out of political conviction, but he will do the right thing out of political expediency, and this I think would be an example," Fischer says. "This is what I think is good for the pro-family community. … I think it’s going to be a long time before he hires another homosexual activist in a prominent position in his campaign."

Still, Fischer isn’t on board now with Romney. The two have some history predating Grenell. Fischer, who has attacked Mormonism and blamed gays for the Holocaust, was called out by Romney at CPAC last October. “We should remember that decency and civility are values too,” Romney said at the time. “One of the speakers who will follow me today, has crossed that line, I think.” A spokesman later confirmed to Politico that Fischer was the intended target. Fischer says he took that, too, as a shout-out to the "homosexual lobby."

Fischer never really quite gave up on Santorum, as recently as April 4 writing, "If, for the sake of argument, Romney wins the nomination, social conservatives had better shift their intense focus to taking over the Senate and the House, as we will not have a reliable ally in the Oval Office no matter who wins in November. Obama will be an in-your-face adversary on social issues, and Romney will be a splintered reed on which to lean at best. He has, of course, been saying the right things on the campaign trail, but his record (as opposed to his rhetoric) is reason for grave concern."

Would he grant Romney an endorsement if the campaign sought it? "I think that's about as likely as a meteor hitting your living room tonight," he says dryly, though he adds he was "extremely encouraged" by Grenell's resignation. But is that enough for him to drop the misgivings that Romney is actually a cultural conservative? "Do I trust him?" Fischer says. "No."