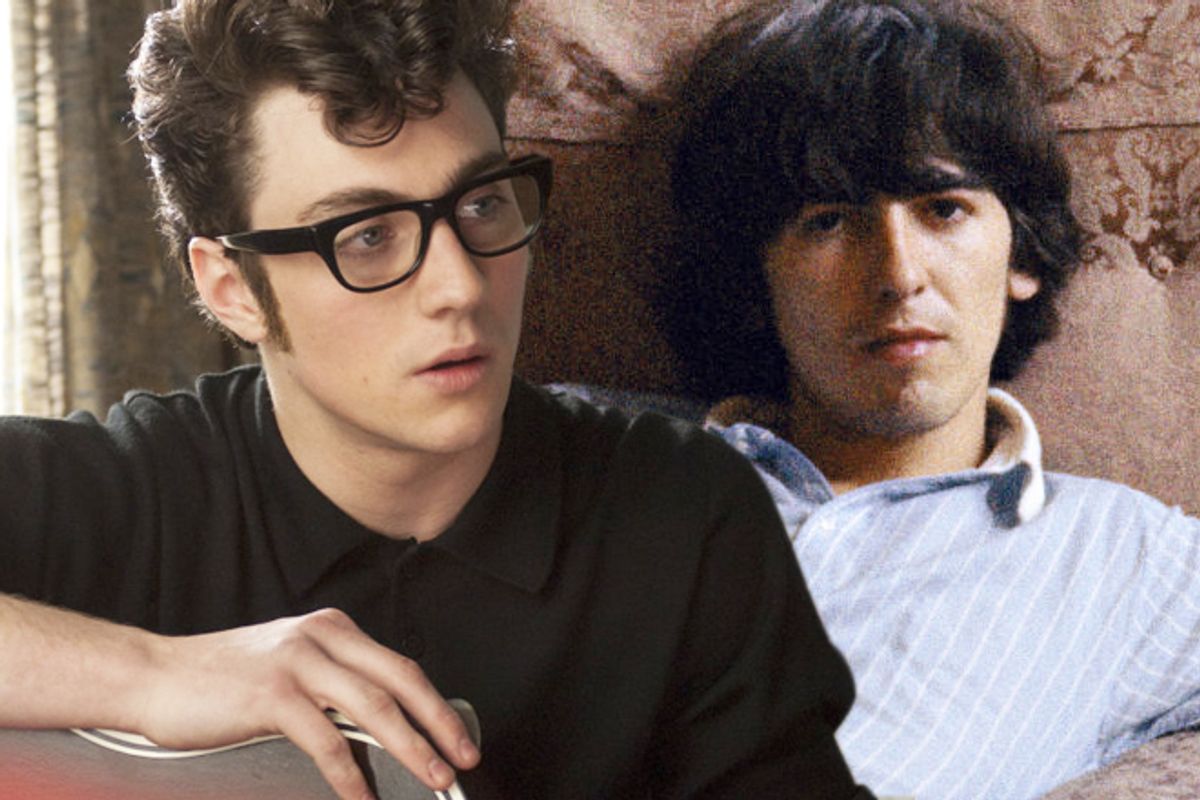 Stills from "Nowhere Boy" and "George Harrison: Living in the Material World"
--

If I were the Texas School Board in search of the one text that could justify teaching “intelligent design,” I would use the Creation Myth of the Beatles as my sole curriculum.  It is a story oft retold with wonder, as it defines the word “supernatural.” Two musical prodigies of staggering gifts, with complementary personalities, just happen to meet in the same fairground, and just as casually decide to change the world. They soon meet a third musical force of nature, and, just before they march from their secret fortress, they add the final element to what is now an impregnable weapon of mass musical distraction.

In the words of noted musicologist Steve Jobs, "It was the chemistry of a small group of people, and that chemistry was greater than the sum of the parts. And so John kept Paul from being a teenybopper and Paul kept John from drifting out into the cosmos, and it was magic. And George, in the end, I think provided a tremendous amount of soul to the group. I don't know what Ringo did.”

If Jobs had to ask what Ringo did, well, it proves every genius has a blind spot. But the ineffable mystery is this. There are many precedents for single geniuses that spontaneously combust into existence (see Dylan, Bob, or Hendrix, Jimi), but how do four extraordinary elements come together to produce a world-changing hydrogen bomb of musical genius? I’ll leave the Texas School Board to explain that to me. Or, watch the two films in this week's double bill.

Today marks the DVD release of "George Harrison: Living in the Material World," the four-hour Martin Scorsese dissection of the life and offhand times of George Harrison. The film's compiler -- not really director (more on that later) -- Martin Scorsese, knows from musical genius and genius in general, being something of one himself. His last core sample on this subject, "No Direction Home," spent four hours getting as close to the genesis of Bob Dylan’s genius as the artist would allow, which is to say, not very. It wisely did the next best thing, which was just showing Dylan being Dylan, while a chorus of friends and acquaintances tried to figure it all out. Nobody came close, of course, and Dylan’s own interview was conducted by his manager, Jeff Rosen, with all of the hardball questioning one would expect of Fox’s Chris Wallace interviewing John Boehner. Scorsese did the best he could – and that is very good indeed – overseeing a compilation of found objects in something that resembled a narrative structure. But in Dylan’s case, good is never good enough. Essential viewing if you are a Dylan fan, but ultimately, a museum artifact, where Dylan’s infinity of talent is definitely not on trial.

Scorsese’s follow-up, "George Harrison: Living in the Material World,"  is not really much different, though, ironically, one of the very few things left out in this tragical history tour was the impact of Harrison’s long creative and personal association with Dylan. The Beatles Creation Myth is front and center here, and as a duly authorized by the Harrison estate project, the archive material takes the viewer on a ride through the highlights. But only in the back seat. Paul McCartney and Ringo Starr are both interviewed at length on both Harrison and the journey they took together, but they offer few new insights. Ringo Starr lets down his guard only once, when he remembers his last encounter with his dying comrade, but that guard is soon posted again, and the show goes on. Knowing the forensic details of a magic trick does not do that trick any favors, and there’s little magic to be found in the first half of this film.

The second half of the film that deals with George coping with that ever-so-awful burden of huge fame and unlimited wealth drags on longer than the interminable jams that rounded out Sides 5 and 6 of the vinyl of "All Things Must Pass," and while Harrison emerges as the hero of his own life, we ultimately agree with him that there were compelling reasons why his private life should have stayed private.

Sometimes, as I am sure Scorsese knows, bootlegs reveal far more than official releases, and the weight of being an “Authorized Release” somehow diminishes the end result. Scorsese doesn’t put much of his own skin in the game, and acts less as a director here than a detached observer, and that detachment prevents us from connecting with a story that defined a cultural renaissance. One longs to see Scorsese on fire, beating the creative process into submission in the way that Nick Nolte’s abstract painter bashed out a canvas to Dylan’s 1974 apocalyptic version of "Like a Rolling Stone" in the underrated anthology “New York Stories." It takes one to know one, and in "George Harrison: Living in the Material World," as in his other musical hagiographies, Scorsese seems almost embarrassed to confront genius on his own terms, in that secret language he’s privileged to share with his subjects.

A much scruffier and ultimately more revealing insight into the Beatles Creation Myth comes from the 2009 "Nowhere Boy." This movie is set entirely in those moments when a strange kind of human alchemy transpired, in the grimy laboratory of Liverpool. No attempt is made to explain how the magic happened, but the viewer gets the distinct sense “why.” It’s ironic that one of the most insightful glimpses into the real George Harrison in "Living in the Material World" comes from a long excerpt from "A Hard Day's Night," where George stumbles into an advertising focus group, and returns the cynical condescension he is given with a far more withering detachment. The fact that this scene is wholly fictional does not diminish its insight – and the same thing can be said for "Nowhere Boy."

Based on a memoir by Lennon’s half-sister, Julia Baird, the film was endorsed and informed at extreme arm's length by Yoko Ono and Paul McCartney, and is far better for their lack of involvement. Lennon is inhabited, not played, by Aaron Johnson, and at no time does Johnson’s performance descend into mere impression. Johnson just “is” – and within a few moments of his first on-screen appearance, you are transported back to 1955, and present at the creation. Primal rock 'n' roll fills the air, and a rough beast slouches on its way to be born, and Johnson’s Lennon puts a face on that creature. The film’s director, Sam Taylor-Wood, married the much younger Aaron Johnson after she completed the movie, and her primal attraction does seem justified.

All the bases are covered. The eternal fights with Aunt Mimi, played with prim precision by Kristin Scott Thomas. The strange, almost sexual attraction between Lennon and his uninhibited mother, Julia. And of course, the legendary 1957 first meeting with Thomas Brodie-Sangster’s Paul McCartney. Entire books have been written about this July day at a school fair, where the world turned on its axis. As a card-carrying Beatlemaniac, with a mail-order degree in advanced Moptopology, I noticed that “Nowhere Boy” got all of the details just exactly right, down to the checkered shirt that Lennon wore on that meeting day, and even a brief glimpse of the photographer who took the now iconic picture that is the only record of that day when the world turned inside out. George Harrison’s later back-of-a-bus passage into legend is also documented adroitly, though here, as was sadly the case in the life of the Beatles, Harrison plays a supporting role.

But in ways that no authorized documentary can hope to attain, "Nowhere Boy" gets the human dimensions of the Beatles myth just right. The shimmering brilliance, tragic vulnerability and occasional brutality of Lennon comes through, and the telepathic connection that bound the Beatles together somehow extends to the viewer. Even if huge dramatic licenses are taken, they are not abused. The John Lennon in "Nowhere Boy" is often referred to as a “dick” by his peers – but in this film, the wavering line between “dick” and “genius” is navigated with a drunken precision.

Stanley Kubrick once said that “sometimes the truth of a thing is not so much in the 'think' of it, as in the 'feel' of it.” "Nowhere Boy" has that feel, and that touch, and brings us as close as we are likely to get to “feeling” the reality behind the myth.