Disaster alert: On tax cuts and financial regulation, Mitt takes his cues from the same men who advised George W. 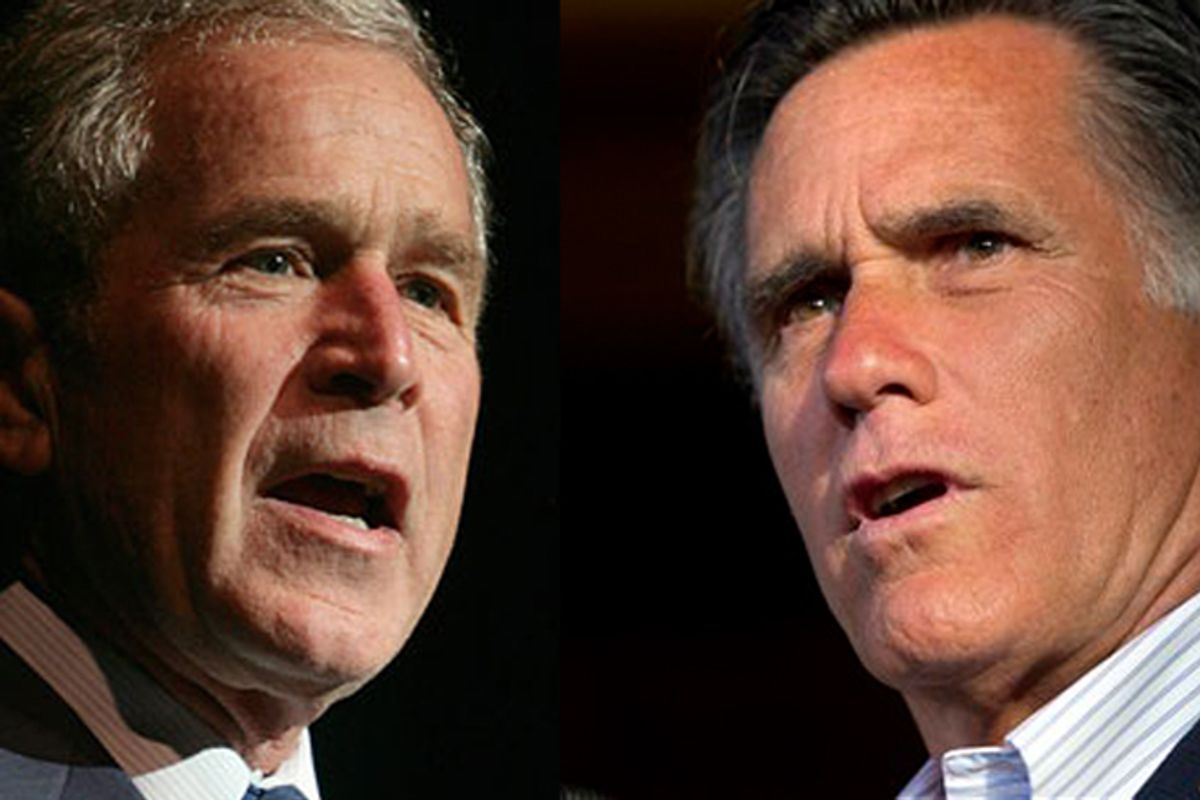 Ezra Klein asks a a mildly disingenuous question in the headline to a blog post today: "Has Team Romney forgotten that the Bush years were terrible?"

That's not the correct formulation. The right question is: "Is Team Romney hoping that Americans have forgotten that the Bush years were terrible?" Because there's no possible way that Romney's team has forgotten anything about the Bush years. Let's single out the all-important subject of the economy. Romney's top two economic advisors are men who served as George W. Bush's top economic advisors: Glenn Hubbard and Greg Mankiw. If anyone can remember what happened to the U.S. economy under George Bush, it would have to be these two distinguished economists.

(It seems appropriate, here, to recall Romney's repeated put-downs of Obama's Harvard connections. It's not just that Romney has two Harvard degrees to Obama's one. Look at his team. Mankiw is a Harvard economics professor. Hubbard got his Ph.D. in economics from Harvard. Romney's "policy director," Lanhee Chen, has four degrees from Harvard!)

But anyway -- last week, a press secretary for the Republican National Committee, Alexandra Franceschi, provoked some Democratic chortling when she responded to a question asking whether the 2012 GOP agenda was any different from the Bush/Cheney agenda. "I think it's that program, just updated," she replied.

Her comment deserves more than the usual cheap "gotcha." Because it is, at least insofar as economic policy is concerned, 100 percent accurate. Hubbard and Mankiw provide the evidence. Hubbard is famous for his role as a chief architect of the Bush tax cuts. If any single non-politician can be blamed for turning the budget surpluses of the Clinton years into the crippling deficits of the Bush era, thus leaving the United States woefully unprepared to deal with a disastrous recession, it's got to be Glenn Hubbard.

And guess what, Romney is currently proposing to lower taxes even further on the richest Americans!

(Hubbard was most proud of his work lowering the taxes on dividends and capital gains, which he described as the "the most pro-growth tax reform that anybody did since Kennedy." However, as Businessweek pointed out, GDP growth under Bush averaged a paltry 2.7 percent from the end of the 2001 recession until December 2007 -- the slowest growth, at that point, registered under any U.S. president since the end of World War II.

Greg Mankiw is famous for a little flap during the Bush reelection campaign when he annoyed the White House by declaring that free trade and outsourcing of jobs "was probably a plus for the American economy in the long run." Mankiw's views were certainly not exceptional for an economist, and didn't actually contravene Bush administration priorities, but they were considered a little insensitive to actually say out loud while the economy was struggling during an election year -- particularly in all-important Rust Belt states pounded by globalization. Eight years later, Mankiw's role in the Romney brain trust suggest that we shouldn't be counting on any fresh thinking about how to respond to the challenges of globalization.

More important, Mankiw was and is a critic of financial sector regulation. We all know where that got us during the Bush administration. But sure enough, today, Romney is campaigning on an agenda that includes rolling back Obama's efforts at banking reform.

Romney and his advisors haven't forgotten what it was like under George Bush. They are campaigning with the explicit promise to return to the economic agenda of Bush. And if Americans vote for team Romney, they should not be surprised at what they get.