Blood on the ice 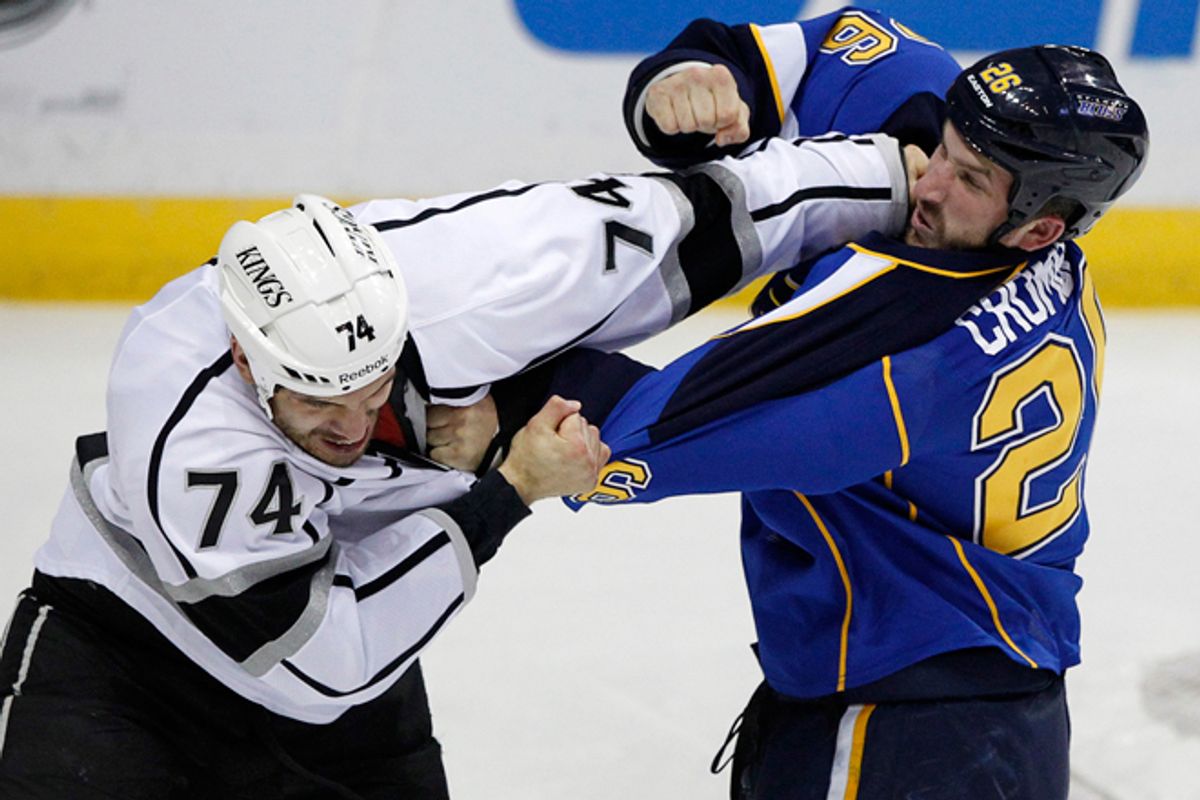 Out of all the sports that try to shroud hardcore violence in the veneer of athleticism -- and there are many -- none has a closer relationship to bloodshed than professional hockey. This is an institution that goes beyond professional football in that it doesn’t merely permit bone-crushing hits as a part of the game itself -- it all but condones players halting a game in progress to break out into fisticuffs.

In the past, when anyone has aired criticism of hockey’s connection to violence, the typical response is that it’s part of the sport’s tradition. In much the same way it has been used in politics to pretend problems are unfixable, this “culture” argument in hockey has served as a flippant conversation ender -- one that short-circuits any frank discussion of what fuels such a culture and whether it should be changed. As the logic goes, the culture has always defined the sport, and always will -- so why judge its value or lack thereof?

Left unexplored is why such a culture exists? That topic is avoided because it might make the violence seem like a symptom of something bigger rather than an isolated problem. That is, it might turn the mirror away from the game and onto its fans -- in the process reflecting back the image of a violence-glorifying society that all-too-eagerly condones brutality as a matter of principle.

But after the first few weeks of the 2012 Stanley Cup playoffs, those deeper roots of hockey’s culture of violence can no longer be ignored. As USA Today reports, the post-season has been “marked by violence” with the league “suspend[ing] eight players...fin[ing] two and [holding] a hearing scheduled Friday for the Phoenix Coyotes' Raffi Torres, who sent the Chicago Blackhawks' Marian Hossa to the hospital Tuesday night with a crushing check.”

If this escalation was happening in a vacuum, it might be explained away as just a weird occurrence reflecting nothing more than one sport’s anomalous playoff year. But the real news in this trend is the fan response -- and how the increase in violence has corresponded to a spike in fan support for the NHL. Indeed, rather than recoiling from this disturbing bedlam, the viewing public is rewarding the NHL with huge ratings.

“In the United States, TV ratings for hockey are up 50 percent for the NBC group of channels over this time last year,” reports the Toronto Globe and Mail. “Viewership is strong in Canada, with some in the broadcasting industry suggesting the very controversy over the spike in cheap-shots and thuggery may be pushing the ratings higher.”

These numbers tell the deeper story about what fuels the relationship between sport and violence. They tell the tale of how hockey’s culture of violence may be less an atavistic expression of the sport’s (supposedly) innate traditions than a market-driven response to consumer demand. As the Boston Globe’s Kevin Dupont put it: “There is blood on the NHL’s hands, and that appears to be very good business, at least for the moment.”

Looked at this way, concussions, injurious hits and fights are exactly what the blood-lusting audience desires -- and so in a crowded professional sports business, hockey has simply become the most forthright in giving fans what they want.

Some NHL apologists would have us believe violence is so ingrained in hockey that reducing it would ruin the sport by effectively taking the game out of the game. But as the NHL’s own bruisers of the 1970s note, there were plenty of great years of hockey when there was far less violence -- and, anyway, nobody’s talking about wholly eliminating physical contact from the game. Not even close. (Additionally, when it comes specifically to fighting, how can anyone really argue that stopping play so that opponents can punch each other is integral to the actual game itself?)

Other apologists insist that the current surge in violence isn’t worrisome because players allegedly don’t have a problem with it. As evidence of this, these voices often cite a recent Sports Illustrated poll showed hockey players opposing any ban on fighting.

The problem is that such sophistry ignores the financial incentives at work. Players see the NHL’s business model and their own financial future built around the current violence, and therefore have every incentive to keep quiet about concerns they might have. Citing their supposed support, then, is yet another way to try to end a much-needed conversation about violence before one begins.

The bright spot in all of this may end up being advertisers. As the Globe and Mail noted:

Only hours after Chicago Blackhawks forward Marian Hossa was carried off the ice on a stretcher following an ugly blindside hit, the NHL’s chief operating officer admitted the league is hearing from its business partners over the rash of suspensions and fines arising out of the on-ice antics, and the ensuing media coverage.

“They’re paying us a lot of money to associate with our brand,” said John Collins, who came to the NHL from the NFL. “So when our brand is under attack in the press on issues as serious as player safety, they want to know that the league is on top of it, and has a plan for dealing with it and hear the league articulate it.”

Last spring, when Sidney Crosby was still trying to recuperate from a persistent concussion and the Montreal Canadiens’ Max Pacioretty was stretchered off the ice after being knocked against a bare stanchion, companies such as Air Canada and Via Rail were outspoken in demanding change in the NHL.

Make no mistake about it: This kind of pressure comes not from any altruism on the part of multinational corporations, but from those corporations’ desire to preserve long-term profits. In that, they seem to be anticipating a future change in public attitudes about sports violence, and are trying to make sure their brands aren’t retroactively tarnished. They fear that their brands will be linked with the feelings of outrage expressed by one parent in his open letter to the league. Recounting his son's enthusiasm for hockey, Wired's Dave Banks wrote to NHL owners:

As the NHL season progressed, we’d occasionally see fights during games. As a kid, it’s tough to understand why grown men are punching each other with such ferocity over a game that he loves so much. He was confused. I tried to explain it to him, but I honestly didn’t have an answer that made a lot of sense. Excuses like, “It’s always been a part of the game” don’t hold a lot of water when cross-examined with the naked innocence of a 10-year-old kid.

Will such outrage become the norm? It's hard to say because while corporate pressure might get NHL officials to do what they can to tone down the brutality, the culture in hockey will only change when the larger culture of violence in society changes. After all, that's what NHL violence is an expression of -- a society that has returned to the Roman Coliseum ethos of seeing violence as acceptable if not wholly entertaining. Bloodshed today is glorified in everything from international war policies to local “stand your ground” laws to movies to video games -- and yes, to professional sports.

In a larger context, then, fan support for violence is completely unsurprising. In fact, it's entirely predictable. And while we can tell ourselves hockey fans are particularly barbaric, and that hockey is just an exceptionally brutal game, the violence of the Stanley Cup playoffs -- and the positive reaction to that violence -- is really a mirror reflecting back a much more pervasive social pathology.