My husband and I were so happy with Greg and Sara. But then, it all fell apart 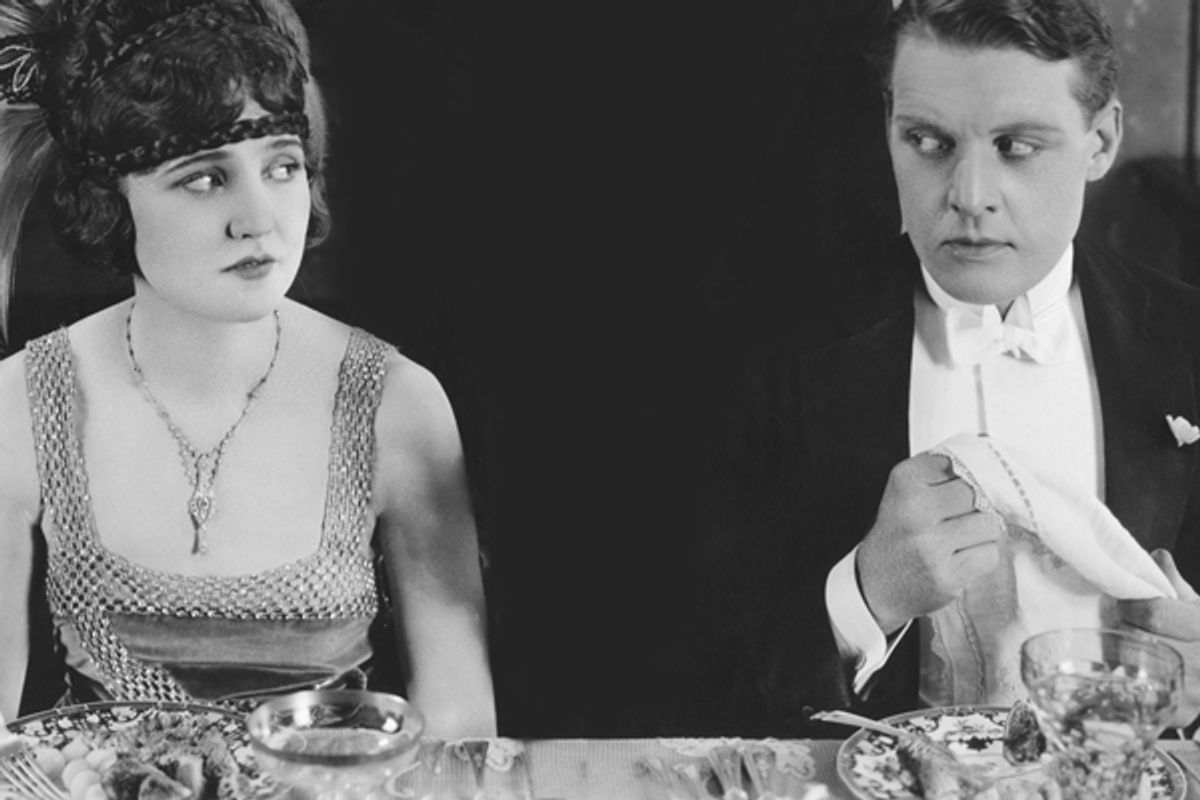 It was a beautiful evening, the room filled with candlelight and buttery smells. Our wine was perfect. But after just two sips, I knew this wasn’t going to work.

Our conversation was boring and needlessly loud. The man had a braying laugh and mentioned his boat repeatedly, calling it “she” each time. I snuck a look at my phone: 8:17 on Saturday. I could be home in my pajamas, watching “Breaking Bad” on Netflix. I imagined standing, turning without a word and walking out.

Instead, I gave my husband a desperate look and he broke in with a question about wind and sails. The man turned, and I relaxed for a second. Next to me, I felt his wife brighten. She’d heard I was a writer and she wanted to talk about books. Specifically “Twilight.” It was her “passion” — the entire series. I nodded and drank steadily as she deconstructed each plot.

After we said goodbye and got into the car, John sighed. “Well, that was a waste of 200 bucks,” he said. Then he reached over and squeezed my hand.

We’d been searching for another couple — people to hang out with and take vacations and trade stories about our three nearly grown children — for more than a year. Ever since our breakup with Sara and Greg.

Those aren’t their real names. But the story is true: It’s about the wonderful couple we fell for and how we were happy for a while and then how our relationship died.

We met at a mutual friend’s and talked for hours. We were all in our 40s. Greg and I had both married — and divorced — young; we each had an adult son with disabilities. John and Sara were devoted stepparents, walking that awkward line between authority and friend. We were all weekend travelers and motorcycle riders. Our tastes overlapped on every level, from Eritrean food to Robert Downey Jr. films.

Things got intense really fast. Greg and Sara came by with takeout twice a week. We showed up at their place with wine every Saturday night. When we were apart for more than a couple days, the texts between us flew.

I based the sardonic-yet-loyal best friend in my  new novel on Sara and sent her the manuscript the moment I finished a draft. Then I waited a tense week for her to read it. I was ecstatic when she approved.

On our anniversaries, which happened to fall on the same autumn weekend, we rented adjoining cottages at a bed and breakfast. I’d been injured earlier that week, trying to help my autistic son get dressed. So I arrived with three cracked ribs and John, Greg and Sara took care of me, lifting me from the booth where we had our celebratory dinner and — when we got back to our cottage — settling me gently into a chair with pillows to support my aching side.

We stayed up that night drinking port and eating apple slices and sharp cheese by a slow-burning fire. Quite late, Greg began speaking in a broken voice about my injury and our afflicted sons. He wept.

“It never gets easier,” he said. “I wake up at night wondering what’s going to happen after I die. But then I think of you guys, in the same situation …”

Sara nodded, leaned over to kiss her husband and put one thumb to the tear rolling into his silver beard. “Finding you two has been … healing,” she said.

Then they hugged us both and left for their own cottage. John ran a hot bath and eased me into it, holding me carefully so I wouldn’t slip. We climbed into our pedestal bed that night, with Greg and Sara next door. And I felt as safe and cared for as I ever had in my life.

I assumed we would take this friendship to our graves.  But shortly after that weekend, small fissures began.

Look back at any relationship that’s splintered and you’ll probably see a series of wrong turns leading up to the end.

My first marriage, for instance. There was no defining event: no affair, no beating, no fight so cruel it couldn’t be taken back. There were, instead, a number of bad decisions whose consequences we suffered together until there was simply too much difficulty between us. So it was with Sara and Greg.

We talked about everything, from condo association problems in the building where John and I lived to employee hassles at the cafe Greg and Sara owned to parenting decisions involving our five collective kids. Looking back, it’s clear this was a problem. We definitely overstepped and overshared.

Take the bitter fight that John and I had over a $12,000 plumbing bill. It was a horrible episode — the biggest rift ever in our marriage — that somehow escalated to a point where John stormed out of the house and stayed gone for several days.

While things were still heated, we made the colossal mistake of airing the fight to our friends. Sara immediately took my side; Greg was stoic, but it was clear he skewed toward John’s. Once the episode was over and our marriage repaired, Sara asked me over for dinner, alone, to talk.

“I still love you,” Sara said, “but I’ll never feel the same way about John. So far as I’m concerned, you never should have taken him back.”

Greg was quiet for a moment. Then he said simply: “Sara and I disagree about this. Please give John my best.”

We resumed as best we could, Sara bristling and John on edge. It wasn’t like before, but I was determined to get back that perfect foursome we’d been in the cottage on that dark September night.

It was as if something invisible had broken. On the surface we looked the same, but now nothing quite worked.

It had long been our habit to meet for dinners where Greg and Sara would cook and John and I would supply the wine. But suddenly, the invitations were waning. So I tried switching it up, inviting them to our place and stirring risottos until my hand went numb. These were awkward events, full of silences; neither of them could hide their disappointment in my lackluster meals.

Also, now that they were coming to our house more frequently one of my teenagers had revolted, saying it was fine to have one stepparent but too much to have three. “Greg and Sara are your friends, not mine,” she said. “I don’t really want their opinions about my life.”

Gradually, our dates grew farther apart and we talked less in between. During a rare walk in spring, Sara told me they were cutting down their social circle. “We’re excising the B list,” she said. Then she paused. I felt an icy sense of dread.

There was one more dinner — a potluck that was weird and strained. Greg and Sara had decided to move down South, help take care of her aging parents, and start life afresh. They were leaving in a couple of months. They said they hoped we’d stay in touch.

But when I sent an email a few weeks later, it went unanswered. I followed with a text message, forgetting I was using a new phone. “Who is this?” Sara texted back. “It’s Ann,” I keyed. “Sorry. Forgot to give you new #.” Silence followed, reproachful and complete.

I thought about begging, calling their voice mail to say: “I miss you. I love you. Can’t we try again?”

I didn’t, for two reasons. The first was my pride — but I could have gotten over that. The second was that John no longer wanted to try; so far as he was concerned, the relationship was dead.

We limped through months of bad dates, with couples we found at John’s workplace and at mine. But some element of the four-way chemistry was always wrong. There was a brief relationship with an editor and her longtime boyfriend. We had hopes for them until the night they showed up for dinner, grim-faced, and told us they’d broken up earlier that day.

Meanwhile, I stalked Sara and Greg online, where they posted news of their going-away party, their older son’s wedding, and their new home. They looked so happy in the photos! Each time, I welled up with affection. But they were gone and our weekend nights were empty. I was sure we’d never find friends like that again.

Shortly after our dinner with the boat captain, a close friend of mine who’d been widowed announced that she’d reconnected with her high school boyfriend and they were planning to marry within the month.

John and I went in wary. Expectations were very low and, sure enough, our first dinner as a foursome was strained. I don’t know what made us try again. But over the next year, something quiet and comfortable grew. Each of us is equally invested and every permutation works; in other words, no one’s taking sides.

We meet once a month or so to talk about almost everything: Our careers, our plans, the puzzlement and joys of our seven collective adult kids. But we don’t get emotionally tangled in each other’s intimate lives or occupy each other’s homes.

I still miss Greg and Sara, but in the way you do a youthful romance so fierce and consuming it burned itself out. We needed them too much; the power dynamic in our relationship was off. What we have now is less dramatic but more durable — much like the marriage John and I built when we came back together.

As a couple, we finally grew up.