Did May Day succeed?

Yesterday’s Occupy reboot mobilized a diverse group of people, but reverted to familiar tactics in the end 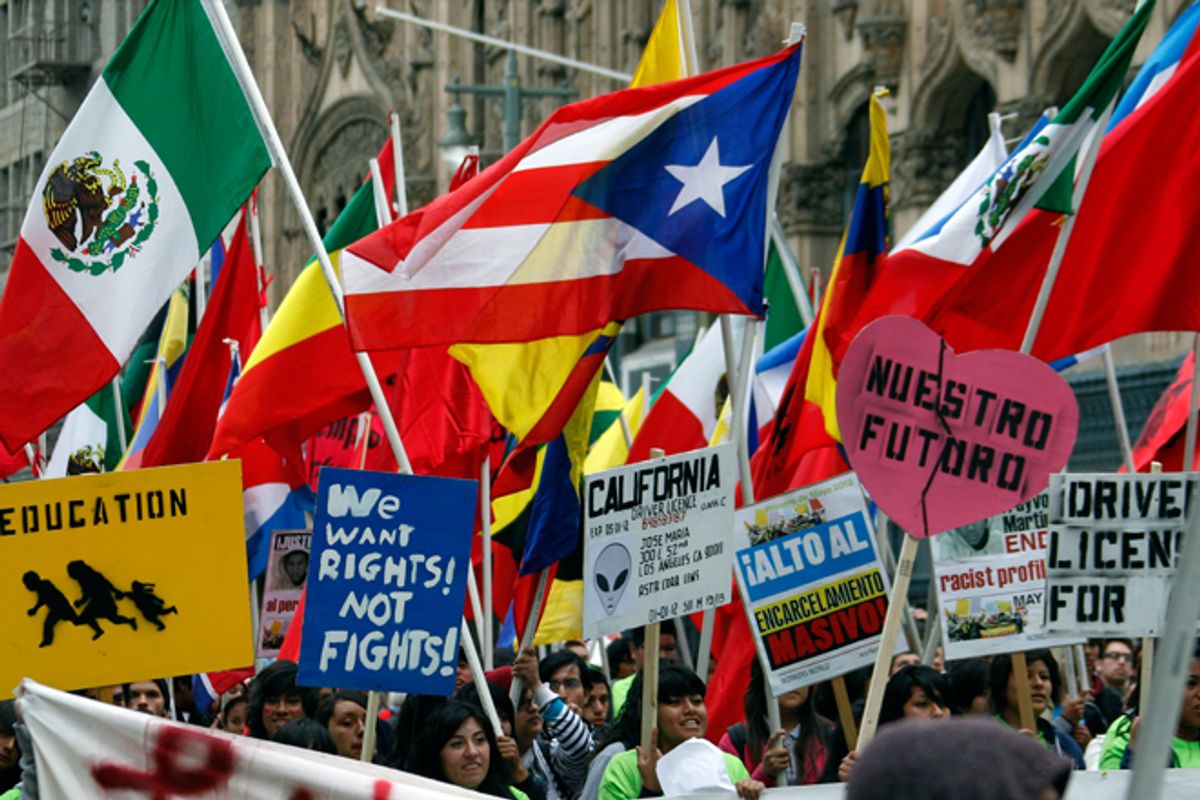 A May Day protest in Los Angeles on Tuesday. (AP/Reed Saxon)
--

In the home city of Occupy Wall Street yesterday, myriad activities dominated three iconic public spaces — Bryant Park near Times Square, Madison Square Park in view of the Flatiron Building, and Union Square, roughly straddling the East and West Villages. An end-of-day march then filled the lower part of Broadway en route to Wall Street, running up to 18 blocks long with as many as 30,000 participants, said organizers. (And whether or not the numbers are too high, the magnitude of the claim seems about right.)

Yet there was still familiar frustration at the end. “I’m actually really disappointed,” said Marisa Holmes, a documentarian and longtime key figure in the officially leaderless movement. She was sitting with about 30 others in an impromptu debriefing on the steps leading to the long-barricaded Chase Plaza a block from Wall Street. Her voice had a tone of exasperation after she listened to another occupier vow that they would soon take over the Vietnam Veterans Memorial Plaza — the endpoint of yesterday’s march. Police had just roused the remaining few hundred demonstrators – and arrested a handful – after the plaza closed at 10 p.m. (Minutes later, police cleared the small gathering from the steps of Chase Plaza, as well.)

“That was not my intention going in,” said Holmes, of yet another public-space occupation. “I want to get beyond it and not just replicate and mimic what we’ve done before — but grow and learn and become even better."

That not-unjustified perception of just redoing what occupiers always do could explain why May Day failed to become a significant national news story. To outsiders, it may have looked like just another case of vague protesters shoving and getting shoved by police.

Yet the familiar cat-and-mouse game with police belied the overall achievements of the day. The afternoon and early evening events — teach-ins, pickets, dancing, art projects, a concert and the march — swelled to embrace a diverse and often mainstream swath of people that made progress toward representing the 99 percent. Socialists and anarchists carried their red or black flags, but Ryan McCarty, a high-school English teacher from the Bronx, carried his 14-month-old son. “It’s one of the reasons I’m here,” said McCarty, looking at his son. “For him.”

Jay Zevin held aloft a large sign that read “Whose Science? Our Science!” Zevin is a Cornell University researcher in cognitive neuroscience. He’s been frustrated for years at cutbacks to National Science Foundation grants and what he sees as overly business-focused, instead of truly research-driven, grant making by the National Institutes of Health. He knows that from having served on NSF committees. In essence, he’s a hardworking, well-educated, articulate professional who knows what he’s talking about. Occupy has emboldened him to speak out. “These ideas [about research funding] are very mainstream in science, but nobody knows what to do about it,” Zevin said.

The march numbers especially swelled with union employees. Roughly 30 labor entities (mainly local chapters) joined the May Day actions, in which, technically, Occupy Wall Street was just one participant — though clearly the dominant one. While unions are seen as fundamental special interests of the institutional left, they are nonetheless composed of real working- and middle-class people. They are among the many (though not necessarily all) demonstrators who defy the “Get a job!” taunts from detractors.

A long view of the movement – beyond day-to-day sit-ins and arrests – reveals no “typical occupier” in New York City. Unless “typical” simply means that they are unhappy with and want to change one or more aspects of U.S. government or business institutions. Some advocates are crystal-clear in their critique and reform goals. Others are virtually opaque with vagaries.

That inevitably makes the loosely connected movement hard to parse from the outside. “A lot of what they’re doing is positive,” said a suit-clad executive who stumbled upon the Madison Square Park teach-ins. “But I’ll be honest with you, a lot of these people are talking out of their asses.”