Khalid Sheikh Mohammed gets his way

Obama officials insisted the terror mastermind receive a military tribunal this week, but their arguments are bunk 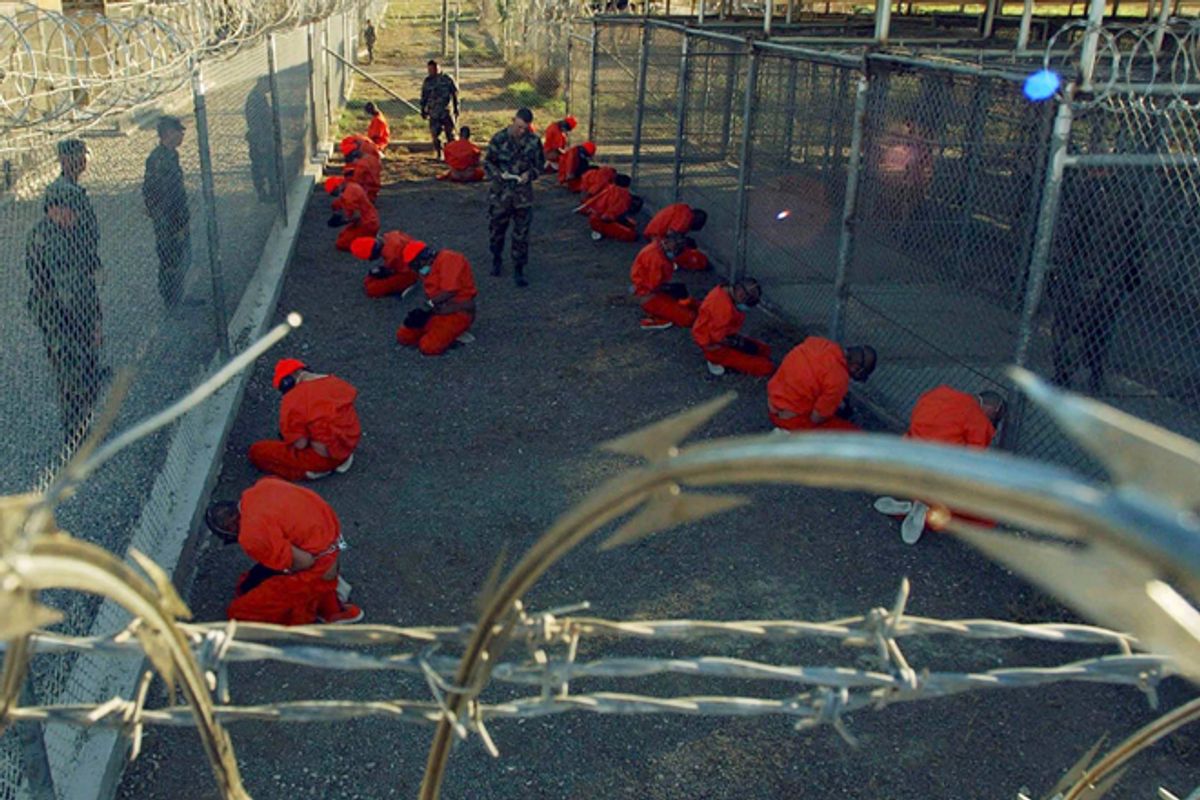 A military guard will be on each arm of Khalid Sheikh Mohammed as he is led into a courtroom on Saturday to be arraigned for a second time before a military commission at Guantanamo Bay. He went through the same process in the same courtroom on nearly the same charges almost four years ago in the closing months of the Bush administration. The fact that President Obama chooses now, six months before voters choose between him and Mitt Romney, to restart what some have dubbed “the trial of the century,” using a second-rate system of justice he had ordered stopped at a facility he had ordered closed, makes an unflattering statement about the timidity of his leadership and the malleability of his principles.

Apologists for the tarnished military commissions, like Attorney General Eric Holder and the sixth and current chief prosecutor Brigadier General Mark Martins, acknowledge that our regular federal courts are best suited for terrorism trials. Holder told an audience at Northwestern University in March:

Simply put, since 9/11, hundreds of individuals have been convicted of terrorism or terrorism-related offenses in Article III courts and are now serving long sentences in federal prison.  Not one has ever escaped custody.  No judicial district has suffered any kind of retaliatory attack. These are facts, not opinions.  There are not two sides to this story. Those who claim that our federal courts are incapable of handling terrorism cases are not registering a dissenting opinion – they are simply wrong.

After singing the praises of the federal courts – which really have been swift, severe and successful in comparison to the six and-a-half dubious trials completed over the past decade at Guantanamo – Martins and Holder pivot to polishing the image of the tarnished military commissions they argue are well-suited for a small category of cases. Martins told an audience at Harvard in April:

It is perfectly reasonable to ask why – with concurrent jurisdiction over offenses that can be characterized as both federal civilian crimes and violations of the law of war and with comparable procedural protections – we should invest great energy and resources in military trials. The answer is that there is a narrow but important category of cases in which the pragmatic and principled choice among the lawful tools available to protect our people and serve the interests of justice is a reformed military commission.

Beltway bureaucrats are prone to using buzzwords to shade the truth. For example, rather than saying “yes, it makes us look bad when we lock people away in prison for a decade without a trial,” some might soften it up by using more subtle Beltway language: “The optics are not optimal.”  The word “pragmatic” has become a favorite of the spinmeisters. In truth, being pragmatic has become a synonym for being a wuss. When a bureaucrat capitulates instead of confronting barriers standing in the way of doing the right thing, and then cites the barriers as an excuse for choosing the easier path, he is lauded for making the “pragmatic choice.” Others might say he simply wussed out. President Obama has been “pragmatic” far too often on national security choices in his first three years in office.

There is nothing pragmatic or principled about undermining America’s reputation as a champion of the rule of law and a supposed model for the world to follow. The apologists for Obama’s decision to embrace military commissions call attention to similarities between the commission rules and the rules in federal courts, and they claim those rules are essentially the same. They argue that the two systems are virtually identical and that trial observers will find trials in the two forums nearly indistinguishable. In some things, however, close is just not good enough. An O’Doul’s looks like a beer and has a beer-like flavor, but a real beer drinker would never argue that an O’Doul’s is virtually indistinguishable from a Sam Adams. Just as a near-beer is not practically the same as a real beer, neither is near-justice the equivalent of real justice. The apologists may think they are fooling the rest of the world when they say at long last military commissions do real justice, but they are wrong.

Holder and Martins justify the need for a second-rate military commission system by talking up the alleged realities of the battlefield that they say make it impracticable for troops to worry about doing rights advisements and establishing a chain of custody for evidence while in the midst of a war. Their general principle is entirely valid … but also totally irrelevant in the cases they intend to prosecute before military commissions. Few of the 779 men ever held at Guantanamo were captured by members of the U.S. armed forces and even fewer still were apprehended on the battlefield as that term is commonly understood by ordinary human beings. Khalid Sheikh Mohammed, for instance, was rousted from a sound sleep and arrested in Rawalpindi, Pakistan, by the Pakistani Inter-Services Intelligence Directorate based on information developed by our civilian Central Intelligence Agency. Abd al Rahim al Nashiri, the alleged USS Cole bomber, was apprehended in Dubai, a bustling global business center in the United Arab Emirates that no one considers a battlefield. Hambali was arrested near Bangkok, Thailand, by Thai authorities and later turned over to the CIA. The truth is that not a single one of the 14 so-called high-value detainees was captured by members of the U.S. armed forces on a battlefield; in fact, none were even apprehended in Afghanistan. The perception of some inexperienced 19-year-old Army private trying to read Miranda rights to a captured al Qaeda fighter while hunkered down in a foxhole with bombs exploding nearby and bullets whizzing past overhead is a canard.

Military commission apologists should have the integrity to stand up and tell the public the truth about the small category of cases they believe are best-suited for the second-rate procedures of the tarnished military commissions. The truth is the reason the apologists want a second-rate military commission option is because of what we did to the detainees, not because of what the detainees did to us. This is not about the exigencies of the battlefield and the problems our soldiers face trying to fight a war; this is about torture, coercion, rendition and a decade or more in confinement without an opportunity to confront the evidence – abuses that would have us up in arms if done to an American citizen by some other country – that make the tarnished military commissions uniquely suited to try and accommodate the small category of cases where we crossed over to the dark side. A military commission may be a justice-themed theatrical production – complete with a script, actors, a sound stage and costumes that create a passable courtroom-like atmosphere – but beneath that facade is a ‘heads we win, tails you lose’ charade where, as the government admits, even if a KSM or a Nashiri is found not guilty he returns to a cell to continue serving what is likely a life sentence. That should not inspire anyone to wave the flag and shout USA! USA! in celebration of our vaunted exceptionalism.

Lloyd Cutler was the youngest member of the prosecution team in the trial of eight Nazi saboteurs captured, convicted by a military commission and executed in a span of six weeks in the summer of 1942. He wrote an op-ed in the Wall Street Journal on December 31, 2001, nearly 60 years after his military commission experience ended and 10 days before the first detainees arrived at Guantanamo Bay. Mr. Cutler said that how we prosecute alleged al Qaeda terrorists will say as much about us as it does about al Qaeda. He warned that success will be judged by our ability to show the world that justice is in fact being done.

Had we heeded Mr. Cutler’s advice back in 2001 we would not be where we are now in 2012, fumbling along more than a decade later still trying to mold a second-rate process to fit around sets of bad facts we created when we turned our backs on the law and our values.  In normal practice, cases are developed to conform to the court. Here, because of how we mistreated some of the detainees, we are trying to develop a court to conform to the cases. We are setting an example for the world, but not a good one.

Morris Davis was chief prosecutor for the military commission at Guantanamo Bay, Cuba, from 2005-2007. He is a retired U.S. Air Force colonel and a member of the faculty at the Howard University School of Law in Washington, D.C.