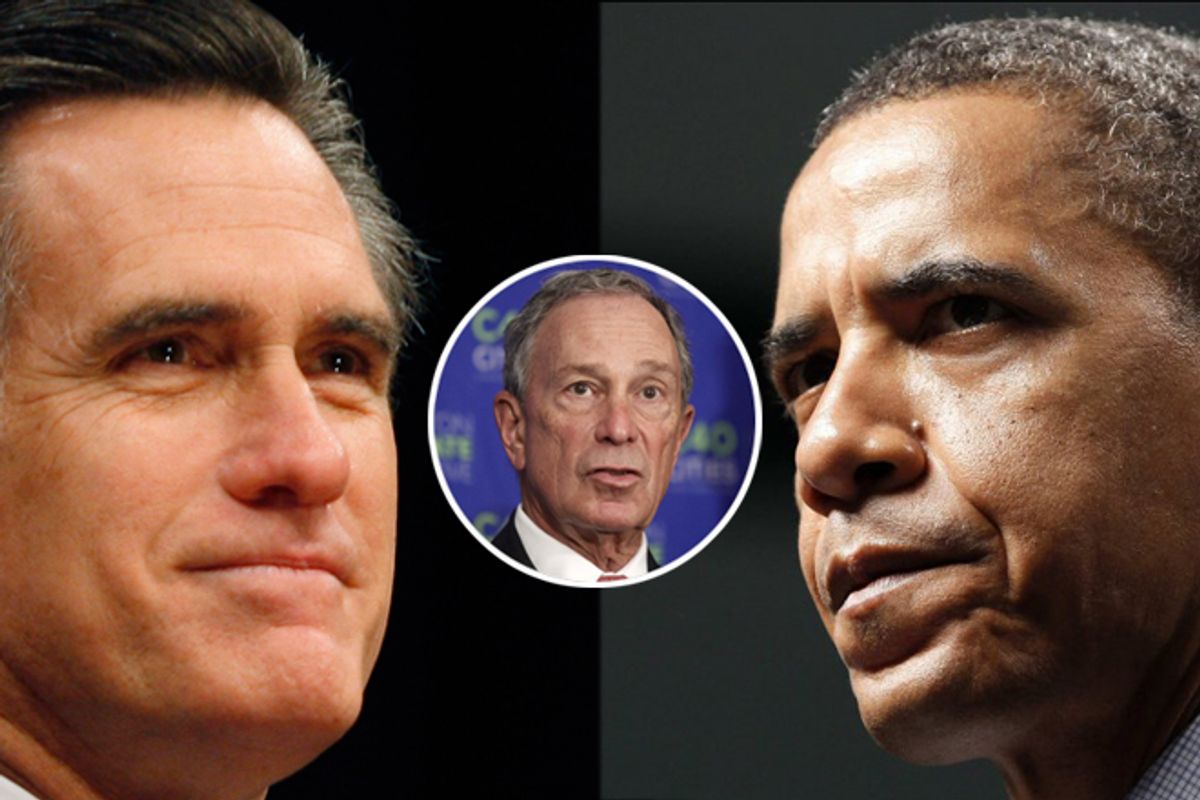 Mitt Romney yesterday had a "private" (well-publicized) meeting with New York City Mayor Michael Bloomberg that was a pretty obvious attempt by Romney to win the for-some-reason "coveted" Bloomberg endorsement. Mayor Bloomberg is not actually the hugely popular and universally respected national figure that anti-partisanship zealot pundits think he is -- only around 20 percent of Americans viewed him favorably in 2010, and a 2011 poll says he'd get a mere 10 percent of the vote in a three-way presidential race -- but those anti-partisanship zealots represent an important constituency of "rich people who run the media," so a Bloomberg endorsement would be a strong signal that Romney is moderate and wise and prudent and so on.

The Obama administration would also like the Bloomberg endorsement, and both campaigns are trying very hard to win the mayor's support, as Michael Barbaro writes in the New York Times today.

But as his mayoral term winds down, he has told advisers that he is willing to back a candidate this time around, touching off an intense competition for his support in the general election.

“I’ll see down the road,” the mayor said coyly on Tuesday when asked about an endorsement. Describing his impressions of Mr. Romney and Mr. Obama, he made clear that he sees a wide gap between them. “They’re very different, and they give the public a real choice,” he said. “It’s hard to argue that you can’t tell the difference, if you will. They run the spectrum on lots of different issues.”

I would be surprised if Bloomberg ended up endorsing anyone. He loves the attention he receives as a potential endorser, but he cherishes his "non-partisan independent" label much more, and an endorsement of a major-party presidential candidate would sully his carefully maintained brand. He is leading both campaigns on, just as he did in 2008.

In 2007 and 2008, Obama tirelessly wooed Mayor Bloomberg, meeting with him multiple times and showering him with public praise, and he never received an endorsement. McCain also tried to win the mayor's support to no avail. There was even (dumb) speculation about each campaign considering offering Bloomberg the running mate gig. Since Obama took office, he has continued attempting to win the mayor over, inviting him to golf and lunch at the White House and so on. When Bloomberg was running for his third term, in 2009, Obama did no campaigning for his Democratic opponent, Bill Thompson. (Though then-press secretary Robert Gibbs did allow, in a cagy response to a direct question, that the president "would support the Democratic nominee" in his position as "leader of the Democratic party.") The mayor has returned the favor by repeatedly, quietly undermining Obama, dismissing him as arrogant to his good pal Rupert Murdoch and trashing Obama's deficit reduction proposals as, you guessed it, class warfare.

The absurd thing is that there is, policy-wise, practically no daylight between Obama and Bloomberg. The president is a moderate Democrat who believes in the importance of deficit reduction and comprehensive tax reform. The mayor is a liberal Republican who believes the exact same thing. Both of them are "education reformers," both want immigration reform, both support carbon emissions reduction, both are pro-choice, and the list goes on. They don't agree on everything, of course. Bloomberg is more strictly anti-gun than the president, and openly supports gay marriage. You know, just like Mitt Romney.

The only reason Bloomberg would have, from a policy perspective, to back Romney over Obama would be over Dodd-Frank, which Bloomberg opposed, and Obama's plan for a millionaire's tax bracket, which Bloomberg thinks is a "silly" idea. But the mayor's stated position is that all the Bush tax cuts should be allowed to expire, which is the opposite of the Republican position. His other disagreements with the president are solely about rhetoric -- the mayor finds any whiff of economic populism or Democratic partisanship distasteful -- and personality. Not that Mayor Bloomberg, the wise technocrat who always carefully weighs the evidence before making his rational decisions, would support a candidate whose entire platform is wildly at odds with Bloomberg's stated positions, simply because the candidate is nicer to billionaires like Mayor Bloomberg. That would be absurd!

The White House's attempts to win Bloomberg over seem to me perpetually doomed to failure, though I imagine they'll continue to embarrass themselves seeking his support, as he continues flirting with Romney.