When investigators began uncovering Jim Jones’ sordid web of violence and corruption, he was one step ahead of them 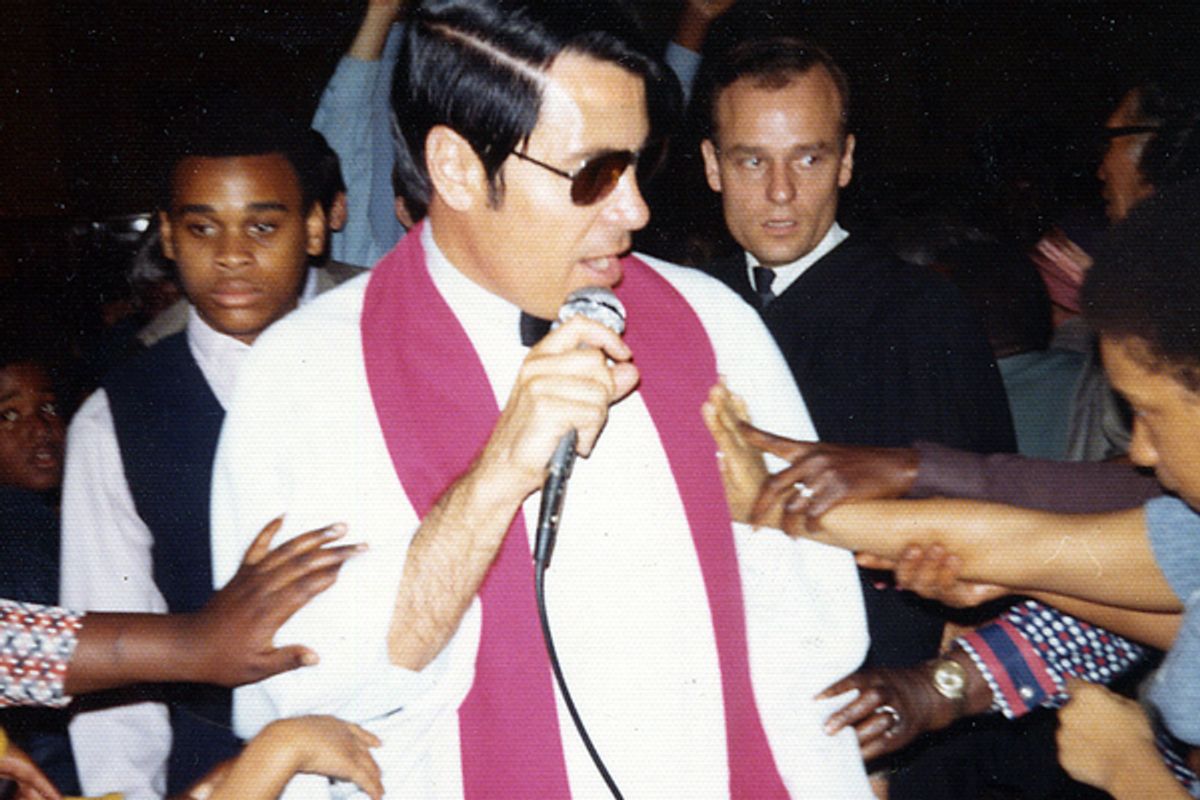 This is Part 2 in a three-part series of excerpts from “Season of the Witch,” Salon founder David Talbot’s new book about the wild and bloody birth of San Francisco values. Read Part 1 here.

David Reuben -- a short, scrappy investigator with the kind of commanding beak that looked like he enjoyed sticking it in people’s business -- leaned back in his chair in San Francisco’s Hall of Justice building, nursing a cup of jailhouse java. Reuben listened with growing intensity as a middle-aged couple named Al and Jeannie Mills unraveled a jaw-dropping story about their lives in Jim Jones’s peculiar church. The Millses were the kind of homespun, American Gothic–looking people you wouldn’t glance at twice on the streets. But if 10 percent of what they were saying was true, Reuben figured, this case was going to rock the city -- and the tremors would radiate far and wide.

Reuben had been recruited by San Francisco District Attorney Joe Freitas after the DA was swept into office with progressive mayor George Moscone in 1975. Like Moscone, Freitas was a Kennedyesque Catholic politician with wavy-haired, Mediterranean good looks. Raised in a Portuguese family in the Central Valley, Freitas had served in all the stations of the liberal cross, including the National Urban League and Common Cause, before running for San Francisco DA at the age of 36. Brimming with youthful self-confidence and political ambition, the new district attorney created a special prosecutions unit, filling it with young “red hots”—as Reuben described himself and his gung-ho colleagues. Freitas promised his mod squad a free hand in going after city corruption. “He told us there were no holds barred: dirty cops, dirty politicians, payoffs,” recalled Reuben. “Joe said, ‘I don’t care who it is, you go after them.’”

Freitas recruited crusading lawyers and investigators from all over the country for his new unit. Reuben and his crew came in with guns blazing, targeting the deep corruption in the San Francisco police force, including payoffs to cops by the skin trade moguls in North Beach. But Reuben soon found that the San Francisco justice establishment was more impregnable than he had imagined.

Coming from Chicago, where he had broken in as an investigator for the state attorney’s office, pursuing corruption in Mayor Richard Daley’s permanent regime, Reuben thought he had seen it all. But the San Francisco cop culture proved an even tougher nut to crack. “I thought that coming from Chicago, I knew old-boy’s networks,” he said, “but this was really something out here. It’s a true old-boy’s network. All the cops and prosecutors know each other, they’re all friends and family, they all went to the same parochial schools. And here we all come into the DA’s office: we were all in our twenties, and we’re all ballbusters. I mean, I took on the Daley machine. We didn’t care, we were going to investigate everybody. Well, it turns out that you don’t do that in San Francisco -- not unless you have the inside support. And I’m Jewish, from Chicago. So I was more outside than you can ever imagine.”

By the time that Al and Jeannie Mills walked into his small office at the Hall of Justice in early 1977, Reuben and his team were beginning to feel demoralized. They had won some minor victories in their campaign against police corruption, but they were feeling increasingly isolated—not just within the Hall of Justice, where police inspectors feared and hated them, but within the DA’s office itself, which was bitterly divided over Freitas’s progressive reign. But the Peoples Temple investigation could make up for all the frustrations, Reuben realized. It was the kind of case that could make an investigator’s career.

The Millses, who defected from the Peoples Temple in 1976, told Reuben and his team that Jim Jones was a violent, drug-crazed despot. They accused him of ordering the murders of disaffected members and subjecting others to savage beatings, including their 16-year-old daughter, who was whipped so severely, according to Al, “her butt looked like hamburger.” The couple -- who had changed their names from Elmer and Deanna Mertle to evade temple enforcers -- told the investigators that Jones forced members to turn over their property and possessions to the church and confiscated their welfare and Social Security checks. They said Jones had also built his organization into a potent political machine, manipulating elections and politicians and working his way into the inner circles of power in San Francisco.

Reuben and his colleagues immediately recognized how explosive the Millses’ charges were. “At the time, Jim Jones was an acknowledged civic leader,” recalled Reuben. “I mean, he was the Second Coming in this city, bringing together black and white, rich and poor. He had presidents and governors and congressmen kissing his ring. And Joe Freitas was one of those people.”

Reuben and the chief of the special prosecutions unit, a former US prosecutor named Bob Graham, girded their loins and walked into their boss’s office to present the accusations against the Peoples Temple. As Reuben and Graham itemized the charges to Freitas and his number two man, Danny Weinstein, the room grew tense. “We lay it all out, and you could’ve heard a pin drop,” Reuben said. “And then Joe looks at us and says, ‘What, are you guys nuts?’”

Freitas heatedly pointed out to his special prosecutions team that people walked into the DA’s office all the time with wild charges and personal grudges. “You guys can’t just buy this stuff,” Freitas admonished them.

Reuben and Graham were incensed. The hard-charging, windmill-tilting DA who had hired them -- and told them they had carte blanche -- was now suggesting that they back off what could be the hottest case they’d ever worked. They immediately knew what was going down. They’d read the newspapers and knew all about the furious allegations swirling around the city: that Jim Jones and his zombie flock had stolen the election for Mayor Moscone, and had worked hard for Freitas too.

“We were pissed,” Reuben recalled later. “It was too dynamic for us not to dig into. All the names mentioned -- Willie Brown, Dianne Feinstein, George Moscone -- the whole gang was in there, I’m sure. And, of course, it was obvious to us -- we’re not idiots -- Joe was in the middle of the thing. He knew that if we started doing this thing, his career might be affected.”

Freitas was too politically savvy to simply shut down the Peoples Temple investigation. He knew that his angry investigators’ suspicions could wind up in the press. So he gave his special team just enough leash to quietly look into the Millses’ accusations. And to make sure that Reuben and Graham did not dig too deeply, Freitas appointed a young deputy named Tim Stoen as his liaison on the case.

Reuben did not know much about Stoen. The deputy DA, who wore horn-rimmed glasses and three-piece suits, was a straitlaced loner. “He was a nerdy kind of guy,” Reuben recalled. “Very bright, well spoken. We thought he was one of us, a reformer. But we joked about it, because he seemed too idealistic. He really wasn’t friendly with anybody, just did his own thing.”

As Reuben and his team dug deeper into the Millses’ hair-raising stories about the Peoples Temple, the allegations were checking out. Interviewing other defectors and anxious relatives of temple members, the investigators soon learned how fearful these people were of reprisals from Jones’s security guards -- all of whom, Reuben discovered, had long rap sheets. Reuben promised his witnesses that he would protect their anonymity. But when he and his colleagues casually referred to their partner on the case, Deputy District Attorney Tim Stoen, the witnesses looked stunned. “Tim Stoen?” said one defector to Reuben, with panic in his eyes. “He’s Jim Jones’s top legal advisor.”

A chill ran up Reuben’s spine when he heard this. Afterwards he and Bob Graham stumbled in a daze over to a cop bar across the street from the Hall of Justice, to compare notes. What the hell was going on? The question hung over them like a noose as they hunched over their drinks. “So now we’re figuring, Is Stoen a plant? Does Freitas know who he is, or did this guy just weasel his way in? Does this all go back to Jones? Even before this, we didn’t know who to trust in the office. But now we’re really paranoid, because we don’t know who’s calling the shots.”

The two investigators marched into Freitas’s office to confront their boss. “We blew up,” recalled Reuben. “We said, ‘What’s going on here? Are we being made patsies in this whole thing?’”

Freitas acted surprised. “He said, ‘Are you guys sure?’ And this and that, like he didn’t know anything about Stoen.” But the investigators realized that Stoen was far too cozy with their boss for him not to have known.

Joe Freitas would later tell the press he had no idea that Tim Stoen was Jones’s right-hand man when he hired him; that he had simply plucked his resume out of the slush pile. But in truth, the Peoples Temple, which had contributed money and campaigned for Freitas, engineered Stoen’s insertion into the DA’s office as a political reward for its efforts. And in a brazen move to cover up the voter fraud committed by the temple during the 1975 election, Freitas put the temple’s lawyer in charge of the investigation. In doing so, he ensured that San Francisco would never find out who’d really won the mayoral election. Stoen brought in Peoples Temple clerical volunteers to help with his politically sensitive probe. The foxes had free run of the henhouse, and they left only feathers.

Three years later, after the name Jim Jones had gone down in infamy, state and federal investigators finally began looking into the shady election. When they asked for all the rosters showing who voted, the city’s deputy registrar of voters went searching for the records in three locked vaults where they were kept. All the records were missing.

After they found out about Stoen, Reuben and Graham began taking their files home at night, no longer sure that they could protect the confidentiality of their Peoples Temple witnesses, some of whom feared for their lives. The investigators’ suspicions were well founded. Stoen, it turned out, was literally a sleeper in the DA’s office. He often spent the night there, though he had a residence on Page Street, giving him free access to the office’s most sensitive documents for almost a year. Stoen and his wife, Grace, whom he had brought into the temple, enjoyed “a free romp through the place after hours,” one source reported. Freitas later shrugged off his deputy’s after-hours routine. “He was a hard worker,” the DA explained, and after toiling late into the night he often needed to avail himself of his office couch.

Excerpted from "Season of the Witch" by David Talbot. Copyright 2012 by David Talbot. Excerpted by permission of Free Press, a division of Simon & Schuster. All rights reserved. No part of this excerpt may be reproduced or reprinted without permission in writing from the publisher.

San Francisco Season Of The Witch