When Obama was an outsider 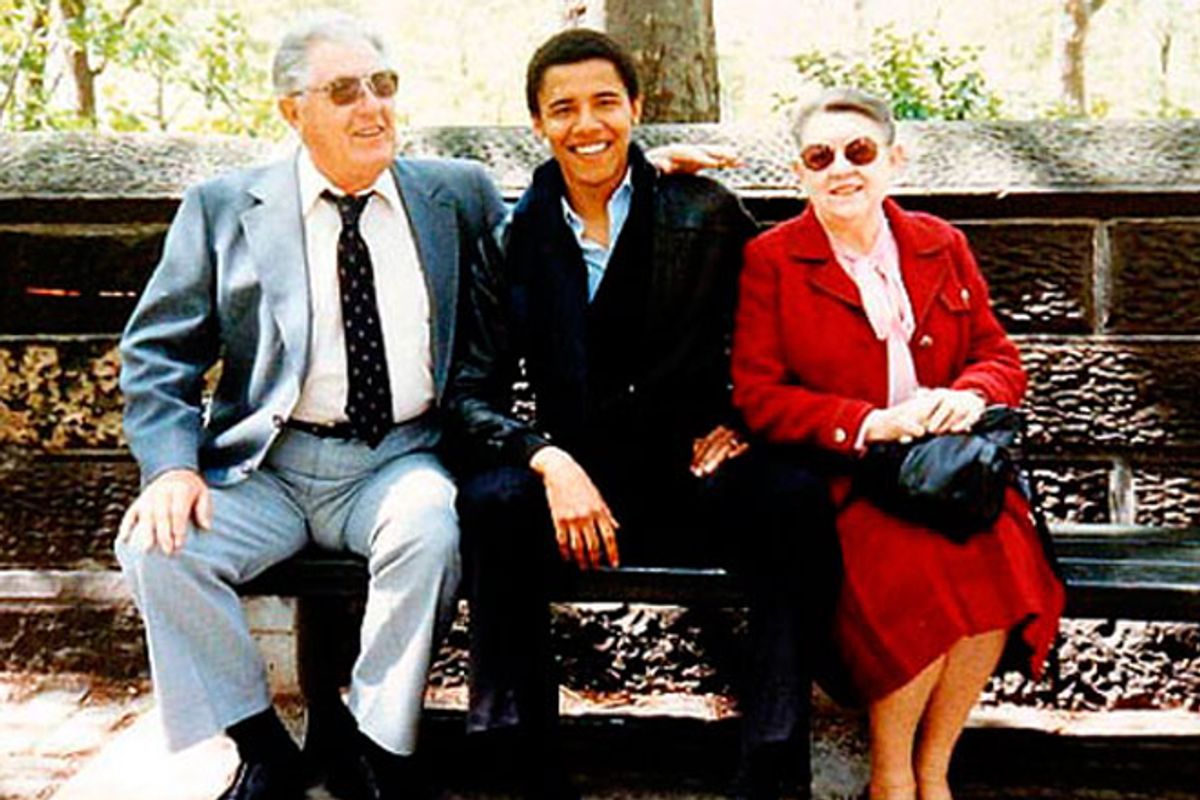 During the 2008 election I wondered about the white girlfriend Barack Obama wrote about in "Dreams From My Father," whom he loved but ultimately left because "if we stayed together I’d eventually live in her [world]." Would the GOP find her and use her as the poster girl for the reverse racism it insisted Obama would inflict on white America? Would Glenn Beck track her down to explore the president's "deep-seated hatred of white people"?

Now David Maraniss has found her, as well as another woman who may have been part of a composite in Obama's writings about his white girlfriends. In a Vanity Fair excerpt from his forthcoming book "Barack Obama: The Story," Maraniss shares the two women's memories – and even passages from letters and journals of the time – to explore their role in the future president's "Becoming Obama." Vanity Fair frames the relationships as symbolizing Obama's "struggling with his identity: American or international? Black or white?" Ultimately, though, the disintegration of his relationship with Genevieve Cook, his serious New York girlfriend, seems less about one of them being white, and one black, than about both being outsiders, at a time when Obama didn't want to be one anymore.

Obviously we should tread carefully in analyzing our accomplished 50-year-old president through the lens of what he wrote or said or did in his early 20s. None of us would want to be judged by the "literary," self-important love letters we wrote back then. Yet Maraniss has assembled clues from an opaque period in Obama's life – after he left middling, West Coast Occidental College to finish school in New York at Ivy League Columbia, and before he found his way to his ultimate home in Chicago. They are years the president today describes as "a very ascetic existence, too serious for my own good"; he hung out with a crowd of Pakistani guys from his Occidental days who, while outsiders themselves, had a lot more fun than Obama did. And his serious girlfriend of the time, Australian transplant Genevieve Cook, captured a restless man in transition in her journal and letters, trying to find his way in a world that didn't immediately seem to have a place for him.

Obama always acknowledged that "Dreams From My Father" featured composite characters and situations, but Maraniss reveals that two dramatic moments that he said led to his breaking up with his white, New York girlfriend – which was Cook -- didn't quite happen the way he described them. In one scene, Obama wrote of seeing a play by a black playwright with his "New York girlfriend":

It was a very angry play, but very funny. Typical black American humor. The audience was mostly black, and everybody was laughing and clapping and hollering like they were in church. After the play was over, my friend started talking about why black people were so angry all the time. I said it was a matter of remembering—nobody asks why Jews remember the Holocaust, I think I said—and she said that’s different, and I said it wasn’t, and she said that anger was just a dead end. We had a big fight, right in front of the theater. When we got back to the car she started crying. She couldn’t be black, she said. She would if she could, but she couldn’t. She could only be herself, and wasn’t that enough.

"That was not her," Obama admitted to Maraniss. "That was an example of compression. I was very sensitive in my book not to write about my girlfriends, partly out of respect for them. So that was a consideration. I thought that [the anecdote involving the reaction of a white girlfriend to the angry black play] was a useful theme to make about sort of the interactions that I had in the relationships with white girlfriends. And so, that occupies, what, two paragraphs in the book? My attitude was it would be dishonest for me not to touch on that at all … so that was an example of sort of editorially how do I figure that out?"

Attributing a clueless racial reaction – "why are black people so angry all the time!?" -- to someone who otherwise sounds sensitive and sympathetic is a little dodgy, but Cook herself expresses no anger at the "compression." She does chafe at the incident Obama uses to describe their ultimate parting. In "Dreams," Obama says the final straw was visiting her wealthy family at their vacation home in Connecticut:

The parents were there, and they were very nice, very gracious. It was autumn, beautiful, with woods all around us, and we paddled a canoe across this round, icy lake full of small gold leaves that collected along the shore. The family knew every inch of the land. They knew how the hills had formed, how the glacial drifts had created the lake, the names of the earliest white settlers—their ancestors—and before that, the names of the Indians who’d once hunted the land. The house was very old, her grandfather’s house. He had inherited it from his grandfather. The library was filled with old books and pictures of the grandfather with famous people he had known—presidents, diplomats, industrialists. There was this tremendous gravity to the room. Standing in that room, I realized that our two worlds, my friend’s and mine, were as distant from each other as Kenya is from Germany. And I knew that if we stayed together I’d eventually live in hers. After all, I’d been doing it most of my life. Between the two of us, I was the one who knew how to live as an outsider.

Cook tells Maraniss she was surprised to read Obama's depiction of the weekend in his memoir, because "she felt as estranged from that milieu as he did, and he knew it." It was her stepfather's home; she hadn't grown up in that setting. According to Maraniss, Cook "thought of herself as an observer, as he did, and brooded about her identity, as he did, and had an energetic, independent, and at times exasperating mother, as he did, and burned with an idealism to right the wrongs of the world, as he did."

“That wasn’t my world,” she said of her mother and stepfather's social stratosphere. “I was through and through infused with the sense of being an outsider, like Barack was.” And only one of them went on to the world of  "presidents, diplomats, industrialists," she notes. "The ironic thing is he moved through the corridors of power in a far more comfortable way than I ever would have."

Yet from the '80s through today, Cook sympathizes with the rockier time Obama had as an "outsider." Their relationship seems to have foundered on his distance and reserve. "I feel that you carefully filter everything in your mind and heart — legitimate, admirable, really — a strength, a necessity in terms of some kind of integrity," she writes to him in a 1984 letter. "But there’s something also there of smoothed veneer, of guardedness … but I’m still left with this feeling of … a bit of a wall—the veil." When she tells him "I love you," he says, "Thank you." Cook depicts him on a Sunday morning, drinking coffee and doing the New York Times crossword puzzle wearing a blue-and-white sarong (the birthers will love that!). She describes their conversations about being outsiders, and her gradual realization that "in his own quest to resolve his ambivalence about black and white, it became very, very clear to me that he needed to go black."

Eerily, in one journal entry Cook envisioned a perfect mate for her diffident boyfriend: “I can’t help thinking that what he would really want, be powerfully drawn to, was a woman, very strong, very upright, a fighter, a laugher, well- experienced—a black woman I keep seeing her as." And after they broke up in 1985, she wrote in her journal:

I’m left wondering if Barack’s reserve, etc. is not just the time in his life, but, after all, emotional scarring that will make it difficult for him to get involved even after he’s sorted his life through with age and experience.

Hard to say, as obviously I was not the person that brought infatuation. (That lithe, bubbly, strong black lady is waiting somewhere!)

It's as if Cook had known about Michelle Robinson, whom the future president wouldn't meet for several years. She's the person who let Obama begin to lose his outsider status. Grounded in her two-parent working-class black Chicago family, Robinson was an insider in a world Obama wanted to join. But while critics have suggested Obama had political motives for joining that world, Cook's portrait, via Maraniss, makes something else clear: He wasn't looking for upward mobility, but inward.

Drudge is currently hyping Obama's "admission" that the play incident he described in his memoir didn't happen with Cook; I assume the right will find other nuggets: the Pakistanis! The sarong! The "reverse racism" in "choosing" to be black, as though he had the choice to be white. The New York Times crossword puzzle! Ignore the frothing; read the piece. It's an intimate portrait of a future president at a perilous psychological time.