Don't look now, but he’s racking up delegates at under-the-radar contests -- and Republicans are officially spooked 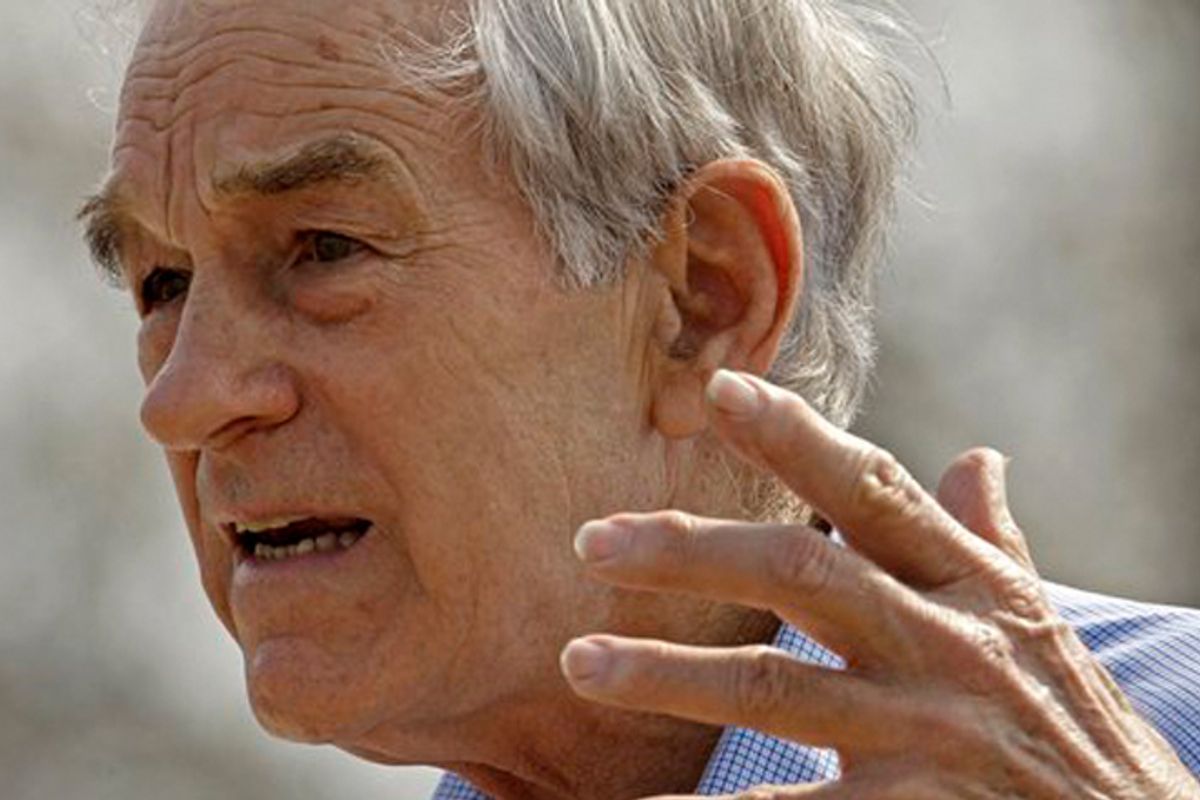 This seems like an odd moment for the Republican National Committee to start worrying about Ron Paul.

Now well into his second campaign for the GOP presidential nomination, he still has yet to win a single statewide Republican primary or caucus, and he’ll presumably be trounced by Mitt Romney in the remaining contests on this year’s docket. More to the point, the political world stopped paying attention to Paul about two months ago, and the threat of him bolting the GOP and running as an independent – a scenario long feared by Republicans – passed long ago.

And yet, the RNC’s chief counsel felt the need this week to issue a warning to the Nevada state GOP about the Paul campaign. At issue is this weekend’s Nevada Republican convention, where delegates to the national convention will be chosen. The state’s caucuses in February were a truly messy (that’s the polite word) affair, but Romney was the clear and overwhelming winner.

On Saturday, though, Paul supporters are expected to flood the state convention and could account for the lion’s share of attendees. This is what prompted the RNC’s counsel to warn the state party that its delegation might be denied seating in Tampa if it’s dominated by Paul-ites.

The RNC isn’t just nervous about Nevada. In the past few weeks, as Romney cemented his hold on the nomination and the media turned its attention to the general election, Paul supporters have wreaked havoc at numerous district caucuses and state conventions, producing some startling results. For instance, 20 of Iowa’s 28 national convention delegates will likely be Paul supporters – even though the Texan finished third in the state’s January caucuses with 21 percent of the vote. And 20 of the 24 delegates selected in district caucuses in Minnesota recently are Paul backers, even though he was trounced by Rick Santorum in the state’s February caucuses. Similar stories have emerged from Louisiana, Colorado and Massachusetts, with the list likely to grow.

This is possible because of the GOP’s multi-tier delegate selection process. In many caucus states, the “official” results that most people saw this winter were from nonbinding straw polls conducted in conjunction with precinct-level caucuses. But when it comes to choosing national convention delegates, the real action is at district caucuses and state conventions. In the past, this distinction hasn’t mattered much, but for the Paul forces – who lack the numbers to win statewide primaries but have the devotion to pack any room, anywhere, at any time – it has offered an inviting loophole. When turnout is small and no one is looking, the Paul folks can win, and that’s what’s been happening in a number of states.

To Paul die-hards, this will all culminate in a surprise for the ages in Tampa, with the political world suddenly realizing that Romney actually doesn’t have the 1,144 delegates needed to win the nomination, thereby allowing Paul to extract major concessions or even steal the nomination for himself.

This isn’t going to happen, but the actual number of delegates that Paul will control is a real mystery at this point, and the final number could be a lot bigger than anyone has expected. Besides the pledged delegates he’s won so far and the extras he’s collecting through caucuses and state conventions, Paul will also have some supporters disguised as Romney delegates. To understand how this works, just consider his campaign’s mischief in Massachusetts, where Romney won 72 percent of the primary vote – and with it, a monopoly on the state’s pledged convention delegates. But to determine who would fill those pledged delegate slots, the state GOP held caucuses recently, and the Paul crowd came out in force, gobbling up 16 of the 19 available positions. In how many other states will this happen, or has it already happened?

And then there are the pledged Newt Gingrich and Rick Santorum delegates, which are still committed to each of them, since they only “suspended” their campaigns. Are some of these delegates actually Paul backers too? And what will they do if and when they are formally released by Gingrich and Santorum?

From an official standpoint, there’s still probably not much that Paul could do at the convention even with a significant chunk of delegates. With plurality support from five state delegations, he could have his name placed in nomination. That would give Paul and his supporters a little more time at the podium, presumably in a non-primetime hour, but the roll call of states would still be a formality, with Paul falling short. He could also push for (and maybe even force floor votes on) platform planks covering his pet issues, but again, his side would simply be outvoted. And anyway, it’s likely that Romney is already planning to accommodate Paul with speaking time and some platform concessions anyway, for the sake of unity.

The threat of an outsize Paul contingent isn’t about platform planks, though. It’s about disruption. National conventions long ago stopped being about official party business and became slickly produced infomercials. But Paul’s supporters aren’t, generally speaking, party loyalists. For them, Tampa won’t be a vacation – it will be a mission. With the right numbers, they could slow the convention down with procedural distractions, messing with the party’s careful scripting of the event. More alarming for Romney is the prospect of Paul delegates loudly and derisively jeering speakers, and maybe even Romney himself, creating an image of chaos and disunity. To understand this threat, just look at what happened at the recent Alaska state GOP convention, where Paul supporters relentlessly heckled two U.S. senators.

Delegate selection for Tampa will continue for the next two months. If the RNC’s warning to Nevada is any indication, national Republicans (and the Romney campaign itself) are finally waking up to what the Paul campaign has been up to, and realizing that every delegate he grabs is potential trouble for them.