German unions to the rescue?

The nation's mass manufacturing strike could benefit workers across the EU 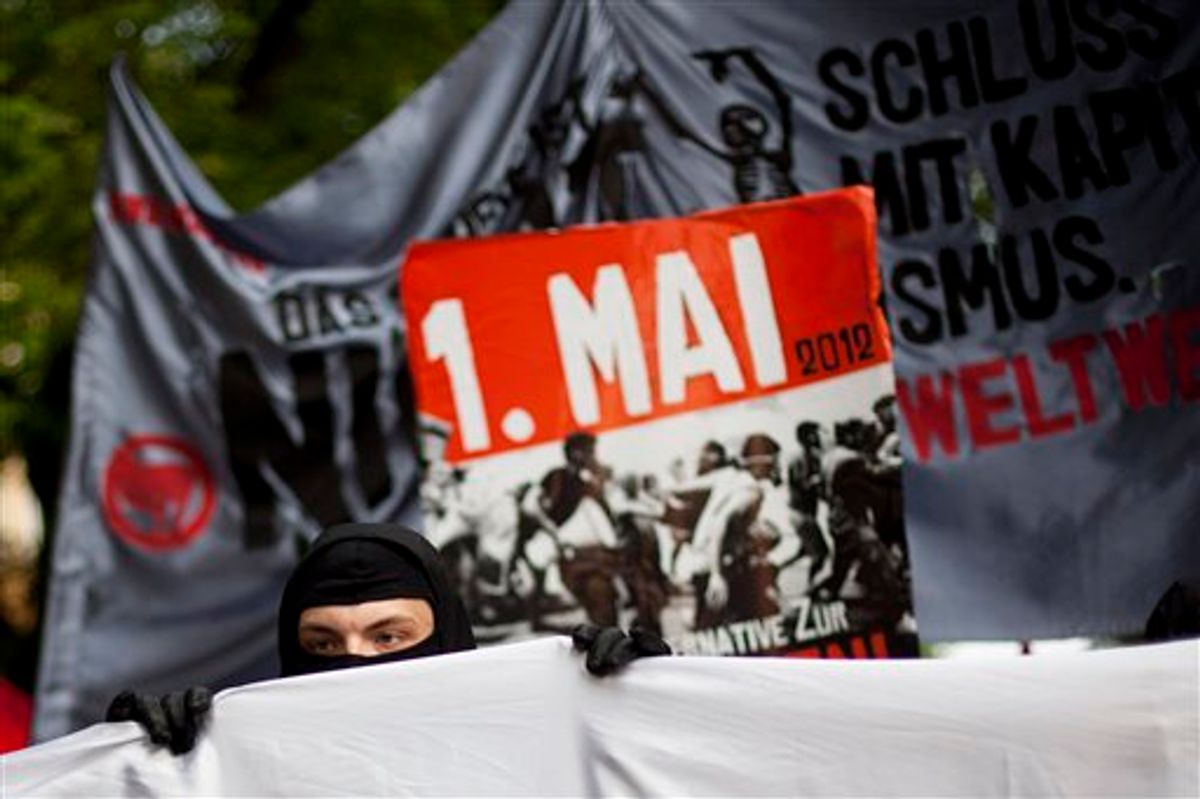 A masked left-wing protester holds a poster as he walks with other demonstrators at a rally to mark May Day in Berlin's district Kreuzberg, Tuesday, May 1, 2012. (AP Photo/Markus Schreiber)
--

BERLIN — Germany’s engineering sector has been hit by an industrial action this week. That’s a sign of just what an island of prosperity Germany has become within the ocean of troubles that is the euro zone.

While workers in many other countries fear for their jobs as their economies tumble into recession, here newly confident labor unions are demanding massive pay rises — and going on strike to get them.

On Wednesday around 30,000 workers in Germany’s vital manufacturing sector downed tools in a coordinated action that affected over 100 companies, including Daimler and Bosch. The strikes continued on Thursday with an estimated 115,000 workers staging a walk out in around 400 companies, including Porsche and Audi, as part of industrial action to secure a hefty 6.5 percent pay rise forGermany’s 3.6 million metalworkers.

Yet, while some workers in troubled countries may look with envy at their German comrades’ brazenness, in fact the action taking place from Berlin to Bavaria could end up being to the benefit of workers in Madrid, Athens or Lisbon.

After all, the stagnating wages of the past 10 years have served to tip the scales decidedly in German companies’ favor, allowing them to boost their competitiveness at a time when wages were soaring in many other euro zone countries.

That, along with actually producing high-quality goods that the rest of the world wants, has been partly to blame for some of the massive disparities within the euro zone, and to the indebtedness of countries that imported all those German goods.

“This has contributed to the imbalances in Europe, and means that Germany is also partly responsible for the current economic crisis in the euro zone,” argues Alexander Herzog-Stein, an economist with the Macroeconomic Policy Institute, a think-tank with links to Germany’s trade unions.

Now, organized labor in Germany could be riding to their fellow Europeans’ rescue, albeit largely out of self interest.

If wage hikes boost domestic consumption back home, it could go some way to correcting the imbalances that have been a hallmark of the monetary union, as German workers spend their wage increases on more products, including imports from other euro-zone states. As such, decent wages in Germany could even help generate much-needed growth elsewhere.

That could be an alternative to brutally slashing jobs and wages in troubled euro-zone countries.

What is certain is that unions here are adamant that wages have not risen fast enough, given Germany’s position as Europe’s industrial powerhouse.

Even in the engineering sector, vital to its export-led economy, wages have stagnated.

Leaders of the metalworkers union, IG Metall say the current employers’ offer of 3 percent is a “farce” and “provocation” and are hoping their action gets them their 6.5 percent. They are also demanding that employers hire apprentices at the end of their training, and that worker representatives have more say over the employment of temporary workers.

Joerg Hoffmann, regional union leader for the wealthy state of Baden-Württemberg, home to Porsche, said that a deal had to be reached by 15 May. “Otherwise we’ll show them the red card.”

The workers in the engineering sector are hoping to emulate other recent successes. Service union Ver.di secured a 6.3 percent pay increase for its 2 million members, following a series of strike actions. And just last weekend Deutsche Telekom agreed to pay its 17,000 employees an overall 6.5 percent increase over two years.

It’s a mark of the revival of confidence among the German trade unions. Now that unemployment has shrunk to its lowest rate in two decades, and with particular industries even complaining of skills shortages, this is a good time to flex their muscles.

It’s a welcome change from their relative weakness over the past decade. Their leverage had already been dented by the mass unemployment that came in the wake of reunification of East and West Germany and the subsequent collapse of East German industry. That was only compounded by the subsequent dot.com crash and the labor-market reforms that made it easier to hire temporary and part-time workers.

The upshot was that in real wage terms, German wages actually decreased over the past decade. Between 2000 and 2007, before the financial crisis even hit, nominal wages only grew by 1 percent, compared to 2.7 percent in the euro zone, and well below the rate of inflation.

At the same time productivity soared. Data released by Germany’s Federal Statistics Office on Monday showed that while average productivity in the European Union had risen by 3.4 percent between 2005 and 2010, in Germany it was 4 percent, compared to 3 percent in France and virtually zero in Italy.

And whereas overall unit labor costs had increased by 6.2 percent in that period, the rise was only 3.6 percent in Germany, and if had not been for the crisis years in 2008 and 2009 when workers were kept on even when orders were slack, those costs would have actually have decreased over the period.

During the crisis the government and companies introduced a short-work scheme that saved many jobs. However, it is also true that during that difficult period, the unions cooperated with employers to keep companies going. Many skilled workers accepted wage cuts or took unpaid leave to help companies get through the slump in demand.

Now it’s payback time. Workers know that Germany’s export sector has been booming and that many of Germany’s industrial giants are raking in the profits. Just last week Volkswagen, Europe’s biggest carmaker, announced a 10 percent increase on its first quarter operating profit to 3.2 billion euros ($4.2 billion) after seeing a record operating profit of 11.3 billion euros in 2011.

“Naturally the workers also read the newspapers, and they read how well the German economy is doing and how it is being praised,” says Herzog-Stein. “And they are asking for their share.”

On Tuesday, the unions were out in force to celebrate May Day, the traditional day of organized labor, and to reiterate their position. “After years of pay cuts in real terms, after years of efforts to help the country through the crisis and helping save many companies and jobs, it’s our turn now,” Michael Sommer, head of the DGB trade union federation said in a speech.

That sentiment was echoed in the banners held up by many union members who took part in the traditional May Day marches. One in Berlin declared, “It’s time to cough up the money.”

Unions are also demanding a general minimum wage of around 8.50 euros ($11) an hour, something that the center-right coalition has so far resisted. However, as Chancellor Angela Merkel moves to the center, hoping to poach voters from the center-left SPD and Greens, she has indicated in recent weeks that she would now back such a move.

There are some economists who worry that the trend toward higher wages, coupled with the ECB’s low interest rates, could lead to Germany’s greatest fear: inflation. However, others argue that in fact a wage hike is long overdue and should not push prices up. “Wages are rising, but this follows a prolonged period of restraint,” Andreas Rees, chief economist at Unicredit in Munich, told Reuters.

And while it could help the rest of Europe if German consumption picked up even further, it could be of benefit to the German economy. For one, it might help offset any slump in demand in recession-hit Europe. After all, even though German exporters have been able to rely on continued demand outside of the continent, particularly from China, the euro zone still accounts for 40 percent of its market.

“If there is not also a boost in domestic demand then Germany will not remain untouched by the euro crisis,” Herzog-Stein argues. “That is why, out of self interest, we need a stronger and more dynamic domestic market.”