Nobody ever calls me anymore

I feel like the last person who still likes talking on the phone. Why did we give it up, and should we reconsider? 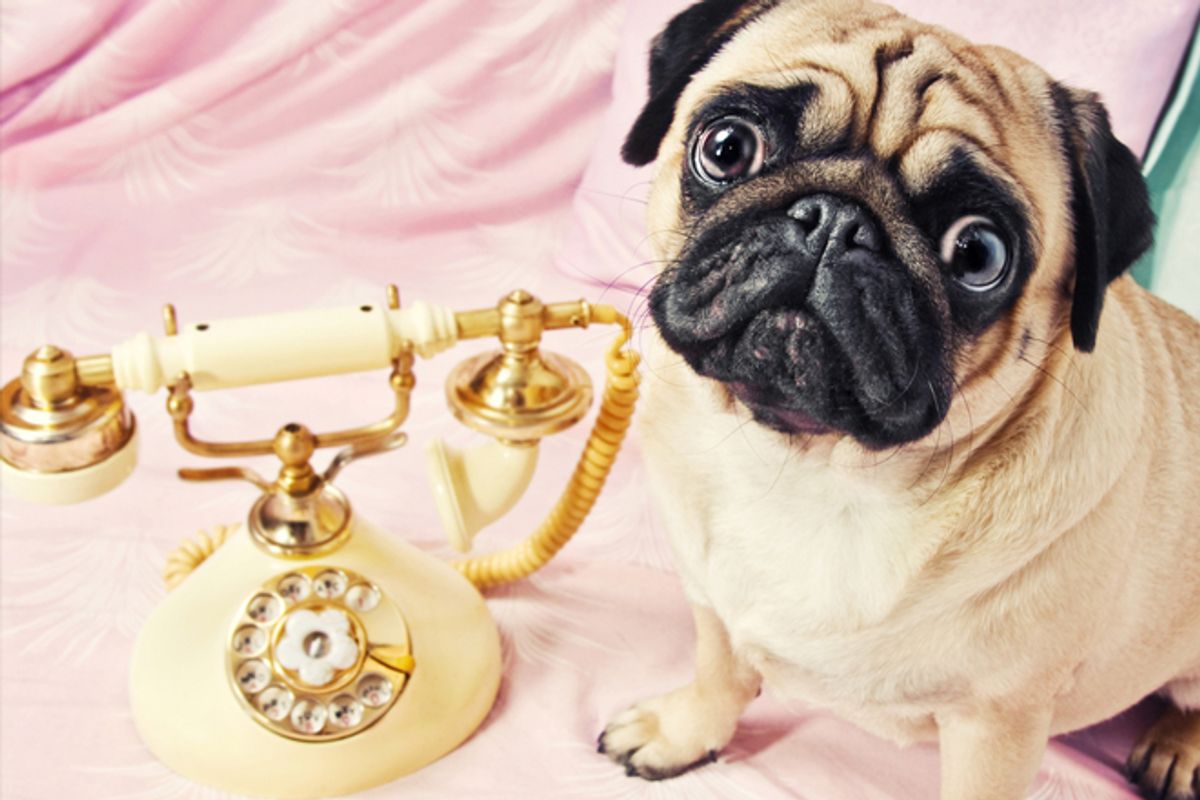 As a teenager, my friend Jennifer used to sneak into her mother’s room after bedtime and steal the phone. She would call the boy she was dating, or “going with,” or whatever we called it back then, and they would talk all night, sometimes till 4 a.m.

But something shifted a few years ago. She became afraid of talking on the phone. Just hearing it ring could provoke panic. Maybe it was the suffocation of carrying her cellphone all day long. (“There are these tentacles in you all the time,” she said.) But she rarely answered the phone, preferring to text message, and the voice mail piled up like unopened bills dumped in a desk drawer – frightening and unknown and ever present -- until she couldn’t bear it anymore, and in a rush of guilt she would delete dozens of messages that had been left for her without even listening to them.

Sometimes she would text the person to find out what they needed: “Sorry I missed your call,” she would type, although technically she wasn’t, and technically she hadn’t. Instead, like so many people I know, she had simply stopped using her phone for the one purpose Edison intended: to speak to another person.

Jennifer calls this “telephobia,” and whenever she mentions it, friends nod in vigorous empathy: I have that. Me too. But “telephobia” is not quite accurate, because the truth is that most of us, Jennifer included, covet and depend on our telephones in a way that was unfathomable to previous generations, burdened by such clunky accouterments as Samsung video recorders and leather Day Runners big as a phone book. (Dang, phone books: Remember those?)

Instead, our phones have become so powerful, and so enmeshed in our lives, that a whole genre of journalism has sprung up around our thorny relationship to them: People who can’t break away from their cellphones for a mere conversation; people who rediscover the joy of life only after chucking them. Our phones are a 24/7 carnival of distraction – Facebook, Twitter, texting, Words With Friends – and the temptation to lose yourself, to become overwhelmed by the demands of a portable fun factory is an American experience currently being hammered out in a thousand trend stories (this one included).

People talk about how tough earlier generations had it, and I for one have no clue how to plow a field. But challenges simply mutate according to the demands of the day. I may be worthless with crop rotation, but I’d like to see a pioneer woman take a left-hand turn at a busy intersection while reading a suggestive text from the guy who is currently making her heart pound. Or, because we all know that’s a terrible idea, I would like to see her take that left turn and not read that text message from the guy. The internal fortitude it requires not to cave in to these seductions on a minute-to-minute basis? Massive.

But this is a story about talking on the phone, and why so many of us stopped doing it. It’s not news that this happened. A December 2011 Nielsen study on mobile media usage shows that voice calls have dipped 12 percent since 2009, while text messaging has exploded in the same time period, even tripling in volume among teens. When I asked friends whether they felt anxiety about talking on the phone, the response was more of a confused look: Why would I talk on the phone? A great 2011 New York Times Styles story by Pamela Paul talked about this shift, how much easier it was to punt our daily communication over to text and email, where we could fiddle with the knobs at our convenience, leaving a trail of evidence as to what we agreed upon and when. Even Miss Manners declared that the old-fashioned phone call was, well, kind of rude.

What I wish I heard more in all these stories about how we communicate -- whether it's about the death of voice mail, or whether or not Facebook is destroying our humanity -- is the fact that it's just plain scary to talk to other people. We avoid it not because people don't matter -- but because they do. And each of us brings emotional baggage to these interactions. When my phone rings, and I don’t recognize that number – forget it. I’m too scarred by the years I spent dodging credit card companies to take that kind of dare. I also don’t jump off cliffs, or do cartwheels on the highway. In fact, it’s amazing to me that there was a time when the phone rang, and someone just answered it. Who could it be? Could it be the guy who was currently making your heart pound? Oooh, let’s pick it up and find out! Now, when I see an unfamiliar number, I feel nothing but outrage: How the hell did someone in the 405 area code get this number? What could they possibly want?

Our social expectations evolve. After all, there was a time when door-to-door salesmen made the rounds in every neighborhood, but if anyone rang the doorbell in my New York apartment, I would cower like I’d seen a masked man outside wielding a crowbar. That’s just the moment we’re living in. We make ourselves wildly available online – dangerously available, some would say – and in real life, we are way more defended. Celebrities pay publicists hefty salaries to control their image, and then jump on Twitter and tippy-type away. Surely it won’t always be like this.

But we have so many alternatives for communication that agreeing on one dominant form is simply not necessary. A lot of people I spoke with despise the phone, and have for a long time. Why would they use it if they didn’t have to? “I'm pretty much always better in written communication than spoken,” a male friend told me via Gchat, where our conversations can thread throughout an entire workday, flaring up for 10 minutes at noon only to pick up steam again at 5 p.m. He adores instant message. “You don't have to worry about interrupting the other person. You don't have to listen to the other person while also trying to think of what you want to say. If the other person is telling a long, boring story, you can just let them tell it.”

A voice call, on the other hand, demands too much attention from him while offering not enough in return. No visual stimulation. Even a casual silence “can feel like a thousand deaths.” Not to mention crappy reception. As phones all go digital, the warmth of a land line has been replaced by an irritating buzzmuffle that requires constant affirmation. Can you hear me? Are you there?

Still, I was taken aback by the vitriol some friends have for talking on the telephone. “I really, really hate it,” a friend said over email, which is how she and I often have deep conversations. “Maybe it's that there are too many distractions (TV, folding laundry) and I am guilty of giving in to them OR it's that I can hear the other person doing the same thing. There just never seems to be a good time to sit down and speak into the void.”

Another friend complained that chatting on her iPhone was like “cradling a brick to my ear.”

And don’t even get people started on voice mail. Everyone detests it. “I cannot handle how uncomfortable it makes me,” said a friend, who is the kind of extrovert who can join any conversation. “There is an intimacy that seems too great, like a song that was written just for me.”

At a time when devices keep us at arms’ length, phone calls rocket the voice straight into the ear. It’s a revealing way to communicate. “The telephone conversation is one that really exposes nuances of meaning,” says Edward Tenner, a visiting scholar in the Rutgers School of Communication and Information, who is also the author of “Our Own Devices.” “So much of language is not just the words as they might appear but the inflection or accent, the deciphering of sarcasm.” Tenner and I spoke by phone, naturally, where the land line he used was nearly decadent in its clarity. I felt, at times, like he was in the room with me. “People have become much more guarded about their public persona,” he continued. “They will manage it on social media and dating sites. They will present carefully tailored pictures. When they’re in an actual conversation, there’s more revelation than they’re comfortable with.”

But that’s different from not wanting to converse at all. In fact, what I heard in these conversations was not a retreat from connectedness but a desire to do it better, to play to one’s own strengths. I happen to love long conversations on the telephone, probably because I think I’m pretty great at it – I’m highly verbal, thrilled by the joust and parry of a good debate, and the pure audio allows me to stop worrying about stupid stuff like how I look in this dress, and what your eyes are staring at right now OMG there is something in my nose. Because my closest friends are scattered across the country, I make regular phone dates that I treat like actual dates. That's not to say I play Barry White and sprinkle rose petals on the bed (though, sure, when the mood strikes), but I do commit to offering that person my full attention for an hour, or an evening, or until the batteries on our phones go dead. A phone call offers a connection you can't get anywhere else -- not from a text, or email, or Gchat. Not even from a face-to-face conversation.

Then again, I also understand my friend Jennifer’s irrational fears of the phone. How do you say no to someone on the other end? How do you untangle yourself from an awkward conversation? Avoiding those messy, human questions can be awful tempting. But Jennifer found her anxiety, or her “telephobia,” or whatever we're calling it was getting in the way of her life. “I was not available for people,” she says, “and that bothered me a lot.”

So she made a resolution to call a friend every weekday for a month. They didn’t always have long conversations. Often they were quite short. She says it was nothing short of amazing, though. I don't want to pretend that Jennifer made a few phone calls and, poof, her life changed. But I also don't want to undersell how transformative it can be to stare down a real, live fear and slay that sucker. In her month of voice calls, Jennifer grew a little closer to people in her life, but she also grew a little closer to the person she wants to be, who is not someone ducking into the closet whenever the phone rings.

The tricky thing about technology is letting it work for you, but not letting it do all the work. Otherwise, you don't grow. Personally, I hope in the future we have robots that can do difficult things, like standing in line at the DMV or waiting for a text message from the guy who is currently making your heart pound. Until then, I have my friends to help. I can call Jennifer – and I know she’ll pick up.