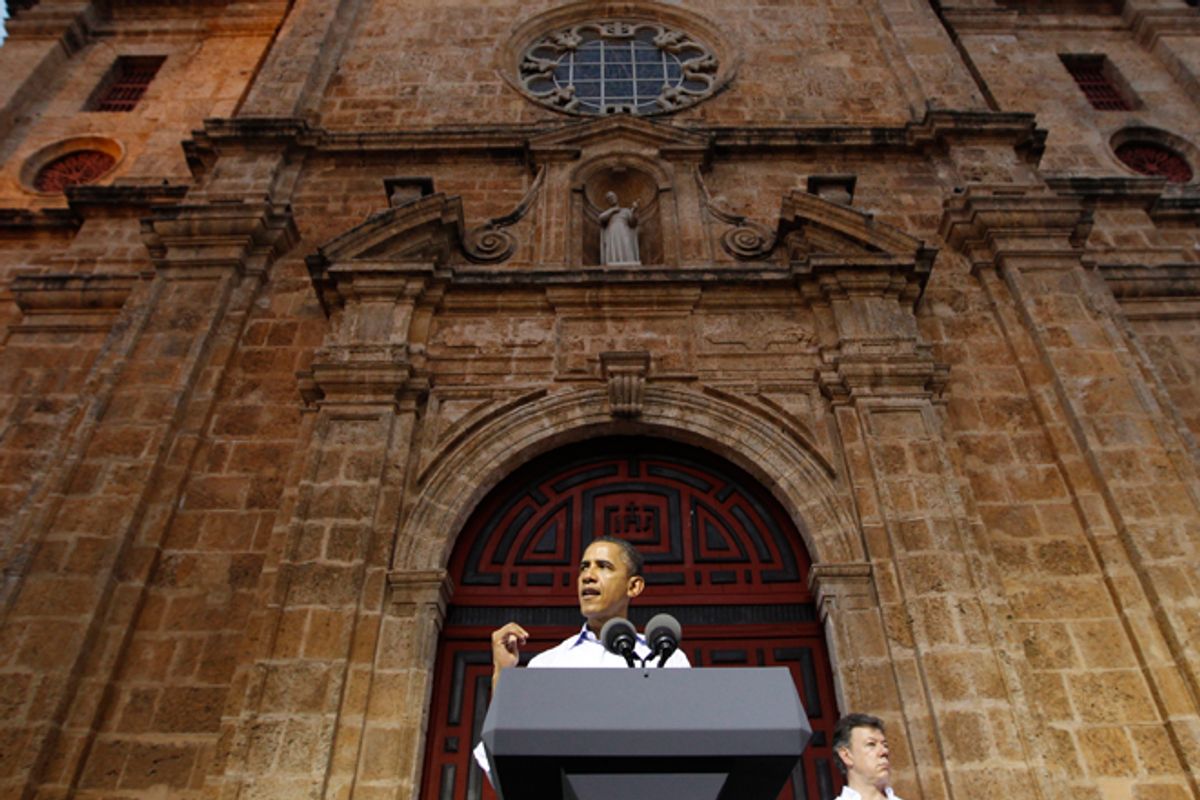 "Compassionate conservatism" may seem a relic of the Bush era, but one of its signatures -- the so-called faith-based initiatives -- quietly persist under President Obama.

The Obama administration’s Friday night news dump of recommendations for reforming faith-based initiatives was yet another frustrating disappointment in the sad history of the president’s faith-based effort. More than a year late, the recommendations were reportedly delayed because the administration wanted to avoid further inflaming the fevered imaginations of those who claim he’s waging a “war on religion.” Insurance coverage for contraception and guaranteeing constitutional rights for Americans who receive taxpayer-funded social services from faith-based organizations are apparently two great tastes that don’t taste great together.

A little history is in order. As a candidate, Obama pledged, “if you get a federal grant, you can't use that grant money to proselytize to the people you help and you can't discriminate against them — or against the people you hire — on the basis of their religion. Second, federal dollars that go directly to churches, temples, and mosques can only be used on secular programs.” Church-state separation advocates cheered; the center-right religious coalition Obama was assiduously courting objected mightily.

And yet, nearly four years after Obama’s campaign trail pledge to reform the faith-based office, beneficiaries of federally funded faith-based social services — people seeking drug treatment, mental health services, marriage counseling, pregnancy prevention services, prenatal care and more — have insufficient legal guarantees that their constitutional right to be free from government-funded, imposed religion will be protected. Today, your tax dollars can still fund, under a George W. Bush executive order, a religious organization that decides, for example, that it can fire the gay employee because its religion so dictates or that it will only hire people of the same faith. Its supporters call it “co-religionist hiring,” but that’s just a polite term for taxpayer-supported discrimination.

For three years the advocacy groups that make up the Coalition Against Religion Discrimination have prevailed on the administration to change this rule — after all, it would only take a stroke of the pen to undo the Bush executive order — and the president has done nothing. Obama has tried to claim the administration “has struck the right balance” by requiring a nebulous “case-by-case” review of instances of discrimination rather than prohibiting it altogether, an assertion the Rev. Welton Gaddy, president of the Interfaith Alliance (a CARD member) has called “misguided and untrue. There is no such thing as balance when it comes to discrimination supported by government funding.”

Instead of tasking administration lawyers to draft new regulations, shortly after taking office Obama appointed an Advisory Council of liberals and conservatives, which he dispatched to offer its own recommendations. Contentious issues, such as discriminatory hiring, were not part of its dossier. While the 2010 Advisory Council report addressed another contentious issue — whether religious organizations receiving federal grants should be required to form a separate nonprofit organization in order to segregate public and private funds — when Obama issued an executive order six months later, it was silent on that matter. Under the executive order, the Interagency Working Group, chaired by the White House Office of Faith-Based and Neighborhood Partnerships and the Office of Management and Budget, was formed to draft uniform model regulations across the 15 federal agencies with faith-based offices. Because Obama left that crucial question out of his executive order, the Working Group, which included representatives from each of those 15 agencies, did not address it in its mishmash of model guidance and regulations.

By offering model “guidance” in some areas and model regulations in others, the Interagency Working Group’s report, church-state separation advocates say, actually weakens some of the recommendations of the Advisory Council in some areas.

“For a year and a half’s worth of work,” said Maggie Garrett, legislative director at Americans United for the Separation of Church and State, also a CARD member, “there’s nothing in there that says, ‘we’ve identified all the regulations that apply to faith-based social services. Here are all the regulations that actually conflict with the Obama executive order and what we need to do to conform.’

“Any time a difficult issue came up, or any time it seemed like there would be the slightest burden on faith-based groups in order to adhere to the Constitution, the issue was sort of dropped,” Garrett added. While the Advisory Council report said that beneficiaries must be given the option of an alternative provider, the model regulations in the Interagency Working Group report only require that the federally funded faith-based organization “undertake reasonable efforts to identify and refer the beneficiary to an alternative provider to which the prospective beneficiary has no objection.” That’s different, Garrett said, from saying, “You must have an alternative provider.” And what constitutes “reasonable” is left vague.

None of this, of course, is designed to accomplish anything before the election. Obama’s November 2010 executive order calls for another round of guidance from the Office of Management and Budget and the Department of Justice after the Working Group report. "It seems like we're never going to get to rule-making," said ACLU legislative counsel Dena Sher. "Meanwhile beneficiaries are left without important protections — the right to be referred to an alternative service provider, and improved rules on prohibited uses of federal funds that clarifies they don’t have to pray before receiving government-funded services.”

On the whole, Sher added, because the Working Group proposed only non-binding model guidance, rather than regulations, on crucial issues, the "teeth seem to be missing" from the report.

In attempting to clarify some issues (although not by regulation), the report further muddied the waters on how scriptural materials can be used in federally funded programs. In one example, in a question and answer appendix intended to clarify prohibited uses of federal funds, the report states:

[S]taff in Federally-funded programs may not provide devotional religious instruction, but, where consistent with the purposes of the program, they may teach about religion, such as the history of religion, comparative religion, literary and other analysis of the Bible and other scripture, and the role of religion in the history of the United States and other countries.  Such instruction may make use of the Bible or other scripture.  Similarly, it is permissible for staff in Federally-funded programs to discuss any topics consistent with the program’s purposes, including religious influences on art, music, literature, and social studies.

Got that? I’m sure the line between “analysis of the Bible” and “devotional religious instruction” is abundantly clear to a faith-driven provider, and to a client who is in many cases in dire need of social services.

Those clients, it should be pointed out, are frequently seeking intensely personal services, such as a variety of counseling, and may be in distress or in desperate situations. A government employee, even if there were resources to staff such a thing, cannot exactly sit in on a counseling session to make sure that the counselor is merely analyzing the Bible rather than preaching to her.

The reason why church-state separation advocates have pressed for bright lines — a clear prohibition on hiring discrimination, and separate incorporation to ensure federal funding is not mixed private funding that can be used to proselytize — is that once you start to blur those lines, the rules become far less clear. And when faith-based providers insist that their essential religious character must be preserved even if they’re receiving federal funds, you start to wonder: Which is more important, bolstering the faith-based organization, or protecting the rights of the clients it serves?

While the Advisory Council’s report addressed many of these issues imperfectly, at least it did so with some clarity. The Interagency Working Group’s report is a muddle that fails to track the recommendations it was ordered to follow. It seems unlikely that federal agencies will be implementing regulations any time soon. And it’s starting to feel like it was intended to be that way.