Preparing for the big one

It's only a matter of time before a large asteroid hits us again -- but, realistically, what can we do about it? 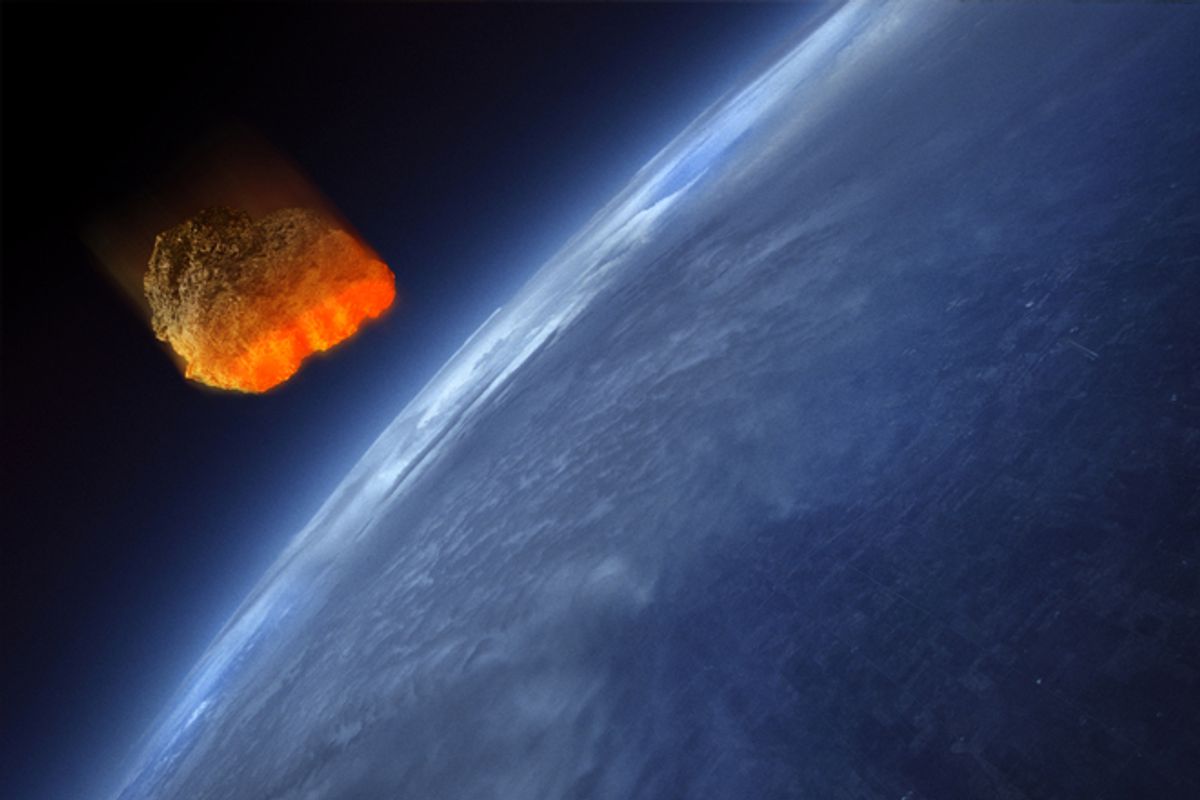 This article was adapted from the new book "The Story of Earth," from Viking Press.

A recent survey of how people are most likely to die rated asteroid impacts pretty low—something like 1 in 100,000. That’s statistically about the same probability as death by lightning or a tsunami. But there’s an obvious flaw in this predictive comparison. Lightning kills one person at a time about sixty times per year. Asteroid impacts, by contrast, probably haven’t killed anyone in thousands of years. But one really bad day, one little thwack could kill almost everyone all at once.

Chances are excellent that you don’t have to worry, nor most likely will any of the next hundred generations. But we can be absolutely sure that another big impact of the dinosaur-killing variety is coming someday, somewhere. In the next fifty million years, Earth will suffer at least one big hit, maybe more. It’s all a matter of time and probability.

The most likely culprits are so-called Earth-crossing asteroids— objects with highly elliptical orbits that cross the plane of Earth’s more circular path around the Sun. At least three hundred of these potential killers are known, and in the next few decades some of them will pass uncomfortably close. On February 22, 1995, a just-discovered asteroid with the benign name 1995 CR whizzed by within a few Earth-Moon distances. On September 29, 2004, asteroid Toutatis, an elongated 1.5-by-3-mile object, passed even closer. And in 2029 asteroid Apophis, a 900-foot diameter rock, is predicted to cross much closer still, well inside the Moon’s orbit. That unsettling encounter will irrevocably alter the Apophis orbit and possibly bring it even closer in the future.

For every known Earth-crossing asteroid, there are probably a dozen or more yet to be spotted. And when one of these projectiles is finally observed, it will likely be much too close for us to do much about it. If we’re the bull’s-eye, we may only have a few days’ warning to settle our affairs.

The consequences of an impact will vary according to the size and location of the impact. A ten-mile boulder would devastate the globe just about anywhere it hits. (By contrast, the dinosaur-killing asteroid of 65 million years ago is estimated to have been about six miles across.) If a ten-mile object hits the oceans—a 70 percent chance, given the distribution of land and sea—then all but Earth’s highest mountain peaks will be swept clean by immense globe-destroying waves. Nothing will survive up to a few thousand feet above sea level. Every coastal city will utterly disappear.

If such a ten-mile asteroid hits land, the immediate devastation may be more localized. Everything within a thousand miles would be obliterated, and massive fires would sweep across whatever continent is the unlucky target. For a short time, more distant lands might be spared the violence, but such an impact would vaporize immense quantities of rock and soil, sending Sun-obscuring clouds into the high atmosphere for a year or more. Photosynthesis would all but shut down. Plant life would be devastated and the food chain would collapse. A few humans might survive the horror, but civilization as we know it would be destroyed.

Smaller impactors would cause less death and destruction, but any asteroid over a few hundred feet, whether it smacks the land or the sea, would cause a natural disaster greater than anything we have known. What to do? Should we ignore the threat as too remote, too insignificant in a world that has so many more immediately pressing problems? What could we do to divert a big rock?

The simplest, first step in avoiding such an event is to look as hard as we can for those elusive Earth-crossing destroyers—to know the enemy. We need dedicated telescopes, automated with digital processors, to locate the Earth-crossing projectiles, to plot their orbits and predict their future pathways. Such an endeavor is relatively cheap and already under way. More could be done, but at least the effort is being made.

And what if we found a large rock that is projected to smash into us a few years from now? For the late Carl Sagan, along with others in both the scientific and the military communities, asteroid deflection is an obvious strategy. If initiated early enough, even a small nudge by a rocket engine or a few well-placed nuclear explosions could shift an asteroid’s orbit sufficiently to change a collision course to a near-miss. Such an eventual necessity is reason enough for a robust program of space exploration, he argued. In a prescient 1993 essay, Sagan wrote, “Since hazards from asteroids and comets must apply to inhabited planets all over the Galaxy, if there are such, intelligent beings everywhere will have to unify their home worlds politically, leave their planets, and move to small nearby worlds around. Their eventual choice, as ours, is spaceflight or extinction.”

Spaceflight or extinction. To survive in the long run, we must journey outward to colonize neighboring worlds. First will come bases on the Moon, though our luminous satellite will long remain a hostile place to live and work. Next is Mars, where more abundant resources— especially lots of frozen subsurface water, but also sunlight, minerals, and a tenuous atmosphere—are at hand. It won’t be easy or cheap; nor is Mars destined to become a thriving colony anytime soon. But settling, and perhaps terra-forming, our promising neighbor may well be the next essential step in our species’s evolution.

Two obvious obstacles will probably delay, if not prevent, the establishment of a Mars base. The first is money. The many tens of billions of dollars it will take to design and implement a Mars landing is outside the most optimistic NASA budget, even in the best of financial times. A cooperative global effort may be the only option, but such a massive international program has never been attempted.

Astronaut survival is an equally daunting challenge, for it’s next to impossible to ensure a safe round-trip to Mars. Space is harsh, with myriad sand-size meteorite bullets to pierce the thin shell of even the most armored capsule and unpredictable solar bursts of lethal penetrating radiation.

What’s more, no rocket technology on the books would allow a spaceship to carry enough fuel to get to Mars and make it back. Some inventors talk of processing Martian water to synthesize enough fuel to refill the tanks, but that technology is only a dream and probably a long way off. Perhaps the more logical option—one that flies in the face of NASA mores but is increasingly promoted in passionate editorials—is a one-way trip. Were we to send an expedition with years of supplies instead of fuel, with sturdy shelter and a greenhouse, with seeds, with a lot of oxygen and water, and with tools to extract more life-giving resources from the red planet, then an expedition might just make it.

Fifty million years from now, Earth will still be a vibrant living world, its blue oceans and green continents shifted but recognizable. The fate of our human species is much less certain. Perhaps we will be extinct. But it is also possible that humans will survive and evolve, moving outward to colonize first our neighboring planets, then our neighboring stars. If so, if our descendants make it into space, then Earth will surely be treasured as never before—as a preserve, as a museum, as a shrine and place of pilgrimage. Perhaps only by leaving our world will humans ever fully appreciate the place of our species’s birth.

Robert M. Hazen is the Clarence Robinson Professor of Earth Science at George Mason University and a senior scientist at the Carnegie Institution's Geophysical Laboratory. The author of numerous books -- including the bestselling "Science Matters" -- Hazen lives with his wife in Glen Echo, Maryland.