Paul Ryan and the Republicans' latest tactic is outright treachery: They want to break the government 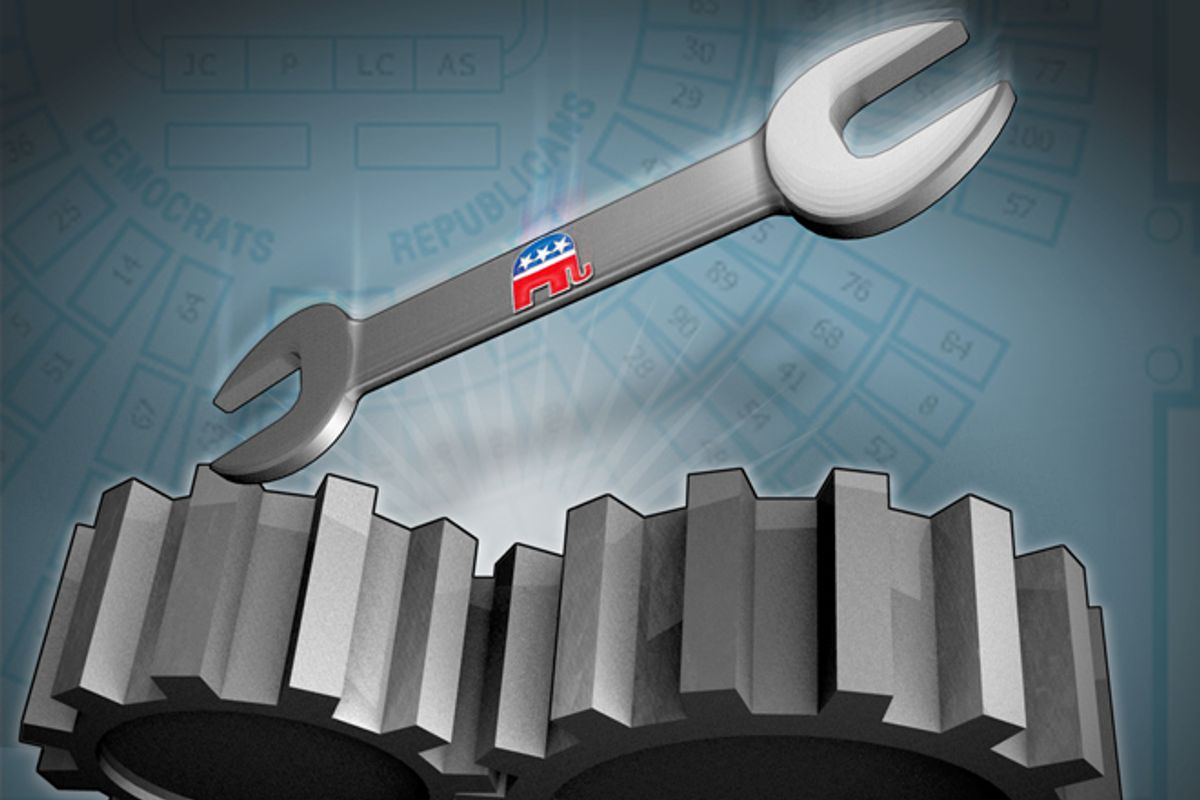 Paul Ryan is nothing if not indefatigable. On Wednesday, the Wisconsin Republican introduced yet another budget bill. The targets of his cuts -- a long list of Democratic priorities -- are painfully familiar. But this time around Ryan wrapped them up in a new package of urgency: preserving national security!

Ryan and his fellow Republicans (and a not inconsiderable number of Democrats) are desperate to find a way to avoid the dreaded  "sequester" -- a package of around $600 billion in defense spending cuts that are scheduled to start kicking in at the end of this year. Never mind the holy grail of deficit reduction: When the beggar with his hand stuck out is the Pentagon, "entitlement" isn't such a dirty word, after all.

As usual, the suffocating stench of Washington kabuki permeates the whole affair. The only reason defense cuts are on the table in the first place dates back to the failure of Republicans and Democrats to come to a real agreement on long-term deficit reduction at the end of last summer's debt ceiling debacle. The threat of looming defense cuts that would automatically take effect in 2013 was supposed to force a bipartisan agreement before that dire day arrived. But the chances that Ryan's newest salvo will get through the Democratic-controlled Senate during an election year are even more unlikely now than they were a year ago. The most realistic scenario? After the election, a lame-duck Congress will kick the can forward, again, to the new Congress and whoever inhabits the White House in 2013.

But a close look at the insidious nature of proposed cuts is still revealing, even in the midst of all the posturing. Ever since the midterm elections of 2010, House Republicans have been honing a new approach to government. Forget about old school "starve the beast" politics, the simple-minded belief that lowering taxes and depriving the government of revenue will ultimately topple the social welfare state. The new school tactic is sabotage. Break the government. Pour sugar into the gas tank. Steal the spark plugs.

Ryan's new package of cuts takes aim at the heart of the two biggest pieces of legislation Democrats passed during the Obama administration, bank reform and healthcare reform. The details are wonky, but the goal is clear. By defunding crucial mechanisms designed to ensure that the laws actually work as intended, Republicans achieve two goals simultaneously: They avoid the anathema of cuts to defense spending, while rendering the legislation that they hate so much not just toothless, but incapacitated.

Machiavelli would applaud. Republicans may have lost the 2008 presidential election, but their insurgency-style guerrilla tactics ever since have ensured that the war is far from over. In 2012, the politics of sabotage rule Washington.

Ryan's new bill, the Sequester Replacement Reconciliation Act of 2012, is constructed from recommendations formulated by six different House committees. The targeted cuts reflect familiar GOP priorities. One of the ways the Agriculture Committee, for example, proposes to save $33.2 billion over 10 years is by slashing food stamp assistance. The House Judiciary Committee put forward medical malpractice liability reforms that would theoretically cut federal reimbursements for spending on "defensive medicine" -- such as medical tests ordered by doctors simply to protect against lawsuits. And so on.

But for our purposes the two most provocative proposed cuts are the House Financial Services Committee's plan to defund the "orderly liquidation authority" mechanism in the Dodd-Frank bank reform act, and the House Energy and Commerce Committee's effort to defund federal support for the construction of the health insurance exchanges at the heart of the Affordable Care Act.

Let's break it down. The "orderly liquidation authority" -- also known as the "resolution authority" -- is the mechanism by which the Dodd-Frank Act aims to avoid the bailout chaos of the financial crisis of 2008. The Dodd-Frank Act includes a vast array of new rules for the financial sector, some of which are more far-reaching than others. But the resolution authority is crucial: it's the law's primary attempt at solving the Too Big To Fail problem -- the frustrating reality that our biggest financial institutions are now so large that their failure routinely threatens to crash the entire U.S. economy. As was demonstrated by the collapse of Lehman Brothers, simply standing by and watching as a major Wall Street financial firm collapses into bankruptcy is an untenable solution. But mindlessly injecting billions of taxpayer dollars without accountability into the likes of Citigroup or the Bank of America or A.I.G. is equally irresponsible.

The Dodd-Frank Act set up a process for determining whether the collapse of a financial institution posed a systemic threat to the economy, putting that company into federal receivership, and guiding it through a government-managed liquidation process. The cost would be recouped by asset sales after the fact. A crucial point: The funding for the resolution authority can only be used to liquidate a financial firm, not to preserve it.

It's probably worth noting here that the "savings" envisioned by getting rid of the resolution authority are entirely illusory. The Congressional Budget Office determined the cost of the resolution authority as around $30 billion over 10 years. But that's contingent on whether there are financial firms that require liquidation. The $30 billion price tag is what the CBO thinks the government would have to pay if it was forced to liquidate "one or more" financial institutions sometime in the next decade.

So if Wall Street manages to avoid disaster over the next 10 years, there would be no government outlay. Win win! But the nasty little secret here is that, with or without the liquidation authority in place, the government will still be forced to take action if Citigroup or JP Morgan Chase is on the verge of collapse. Because there's one thing we know for sure: No matter how much House Republicans claim to revere the autonomously acting free market, when push comes to shove, if the alternative is widespread economic collapse, Wall Street will get its bailout.

It's also important to point out that the Dodd-Frank bill originally pre-funded the liquidation authority with $50 billion in assessments that would be levied on Wall Street's biggest financial institutions. But after much screaming from financial sector lobbyists, that provision was dropped at the insistence of Senate Republicans. So what's really going on here is that after first ensuring that Wall Street was not liable for paying the costs of its own government rescue ahead of time, now Republicans are intent on making sure that Wall Street won't have to pay after it gets bailed out.

One can certainly question whether the Dodd-Frank resolution authority will work as planned in the heat of another crisis. But what's the alternative? Republicans have put forth no other plan other than to simply watch as the economy crashes and burns. Instead, under the cover of budget cuts, they are taking aim at one of the core parts of the bank reform laws intended to prevent a repetition of the 2008 catastrophe. We shouldn't label that fiscal restraint: We should call it vandalism.

The attack on health insurance exchanges is, in some ways, even more reprehensible. If Republicans are supposed to believe in anything, it’s the virtue of free-market competition. And that's exactly what the health exchanges are supposed to provide. As set forth in the Affordable Care Act, starting in 2014, the health exchanges are where Americans who can't get employer-provided insurance will go to compare and contrast the costs and benefits of different health insurance plans.

Way back in 2009, Ezra Klein called the exchanges "the most important, unnoticed part of health reform."

And what happens when you introduce productive competition, efficiencies of scale, more innovation and increased consumer power into a market as dysfunctional as the current situation for health insurance? In theory, you get lower prices and higher quality. And if the Health Insurance Exchange has lower prices and higher quality, more individuals will use it and more companies will buy into it. And if that happens, then the efficiencies of scale should increase, and so should the pace of innovation (as the rewards will be greater with more customers), and so the Health Insurance Exchange should further outpace the other markets, thereby attracting yet more customers, thereby further accelerating the virtuous cycle. Eventually, it could become the country's primary insurance market.

The Affordable Care Act includes federal funding to help set up the exchanges. The "Sequester Replacement Reconciliation Act" zeroes out that funding. How much will this save taxpayers? Hard to say -- the language of Ryan's bill simply orders the repeal of the provision in the ACA that allows the secretary of the Department of Health and Human Services to make financial aid grants to states at his or her discretion. As of February 2012, 33 states and the District of Columbia had received about $610 million in grants so far.

The attack on funding for exchanges is just one of half a dozen jabs at healthcare reform included in Ryan's new bill. (Indeed, picking away at healthcare reform has become the GOP's go-to move for funding any new government expense, as demonstrated, yet again, by last week's House vote to fund an extension of low interest rates on government student loans by raiding so-called Obamacare slush funds.)  And as a deficit-reduction measure, the exchange defunding doesn't offer anything close to the largest savings. For example: The provision for repealing the Prevention and Public Health Fund, an effort to reduce healthcare costs in the long run by spending more on prevention, would save $16 billion over 10 years. In the big scheme of things, a billion here or a billion there for the exchanges won't make that much progress toward $600 billion worth of defense cuts.

But as a targeted cut designed to cripple the long-term efficacy of the Affordable Care Act, Ryan could hardly be wielding his scalpel with more precision. It's brilliant. The part of the ACA that one might imagine most Republicans would be ideologically predisposed to agree with -- the use of free market competition to provide consumers with more choice and lower costs -- is the part that Republicans want to go after.

But that's what the politics of sabotage are all about. If Republicans really cared about the federal budget, they wouldn't insist that tax cuts or wars did not need to be paid for. The point, now, of the budget showdown is not to ensure fiscal restraint, but to disembowel the legislation that a duly elected president and Democratic Congress passed. Starve the beast, so far, has failed. But making sure that government doesn't work at all? That's much more doable.