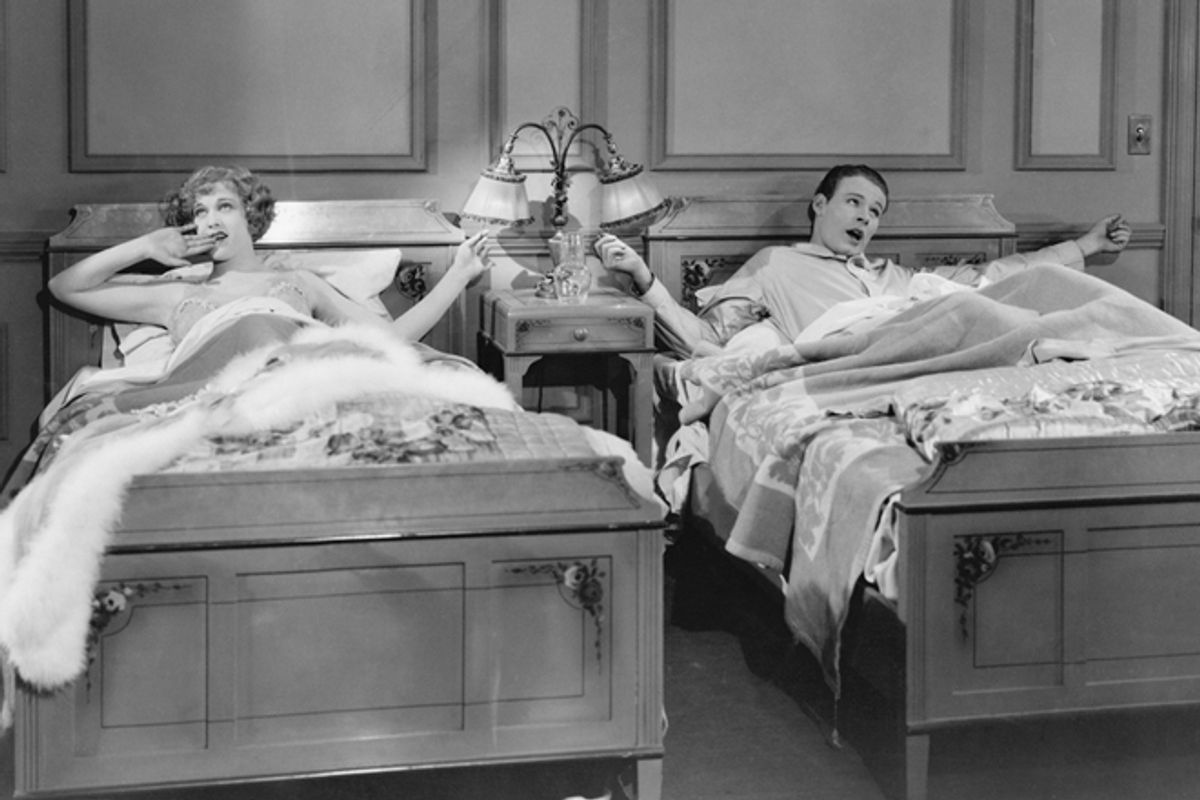 Imagine a high school teacher having to separate a smooching pair outside the classroom door to protect herself from being sued for condoning "gateway sexual activity." Envision a sex education class where the mention of homosexuality is forbidden by law and discussion of contraception, or even puberty, is deemed unnecessary.

That's the world that would be created by a recent raft of abstinence education bills in Tennessee, Utah and Wisconsin. These initiatives are frightening -- but, viewed the right way, they shine light on extreme conservatives' deepest, darkest fears about sex. They're veritable inkblot tests for right-wing sexual pathos.

This week saw the passage of a Tennessee bill that has the usual aim of abstinence initiatives -- to "exclusively and emphatically" promote abstinence until marriage. But the bill ultimately goes above and beyond the usual. It allows parents to seek damages in court if a teacher “promotes gateway sexual activity" to their child. It's unclear what exactly "gateway sexual activity” is because the measure defines it vaguely as "sexual contact encouraging an individual to engage in a non-abstinent behavior." Critics of the bill have suggested that this could include everything from hand holding to french kissing. The bill also proscribes "implicitly" promoting or "condoning" gateway sexual activity (the latter could mean simply turning a blind eye to it, hence the example above).

The potential legal implications here are what's most important, but understanding the philosophy behind this view of "gateway" sexual activity is crucial, too. The thinking here is transparent: Premarital or extramarital sex, even physical affection, is like a drug -- all-consuming, addictive and life-destroying. Sen. Margaret Dayton, a co-sponsor of the bill, actually said, as the Salt Lake Tribune paraphrased, “Teaching children about contraception is comparable to telling kids not to do drugs, then showing them how to 'mainline' heroin.” Here we have that fundamental fear of sex, of the power it holds over us, and of the possibility of losing ourselves (or our kids) to it.

Shortly before the "gateway" bill, Tennessee lawmakers advanced Senate Bill 49, dubbed the "Don't Say Gay Bill," which stipulated that "no public elementary or middle school shall provide any instruction or material that discusses sexual orientation other than heterosexuality." The measure managed to get Senate approval but, after intense public and legislative outcry, it was yanked by one of its sponsors before it faced a final vote in the House. An abstinence bill in Utah, which breezed through the state legislature but was ultimately vetoed last month by the governor, similarly banned any discussion of the gays. Wisconsin's abstinence bill doesn't prohibit the mention of homosexuality, but it does overwrite a current law requiring that teachers "use instructional methods and materials that do not promote bias against pupils of any race, gender, religion, sexual orientation, or ethnic or cultural background."

Here we have that classic conservative view of homosexuality as a corruptive idea rather than an inherent identity; as a social virus -- one that can be inoculated against through silence (or, as some of us might prefer to call it, censorship) -- rather than an inborn reality. (What always strikes me about this attitude is that it seems implicitly to hold that gay sex is so awesome that just hearing about it will make folks want to try it; otherwise, it wouldn’t pose such a threat, now, would it?) It also gets at that right-wing sore spot: The possibility of sex for love or pleasure, rather than procreation.

Of course, homosexuality is far from the only thing that treads in this forbidden territory. The Utah bill forbids any "human sexuality instruction" from covering contraception, premarital sex or "the intricacies of intercourse, sexual stimulation, or erotic behavior." (The ultimate effect of the extreme restrictions is a ban on human sexuality classes. Either teach anti-gay, anti-contraception, abstinence-only "human sexuality," or teach nothing at all.) Contraception helps reduce the negative consequences for engaging in pleasure- or love-based premarital sex -- and abstinence-only advocates desperately want to keep the sexual stakes high. (For the same reason we see attempts to restrict access to contraception and HPV vaccines.)

Speaking of negative consequences, the Utah and Wisconsin bills share a focus on STIs and unwanted pregnancy as the inevitable result of premarital sex. The Utah measure requires that human sexuality classes underscore "the importance of abstinence from all sexual activity before marriage and fidelity after marriage as the only sure methods for preventing certain communicable diseases." The Wisconsin initiative mandates that human sexuality classes "promote abstinence and marriage over contraception" and "emphasize that abstinence is the only reliable way to prevent pregnancy and avoid sexually transmitted infections" (which is patently false).

Even the acknowledgement of hormonal changes and natural urges is dangerous. Earlier this month, Wisconsin Gov. Scott Walker signed into law a bill that removed not only contraceptives but also puberty -- puberty! -- from the list of required topics in sex-ed classes. The concept of puberty itself makes natural what abstinence-only advocates desperately want to seem unnatural.

More relatable is the concern guiding the push for greater parental power in some of these bills. The Utah measure requires that guardians make up the majority of review committees for human sexuality curricula and that they be allowed to participate in the development of abstinence-only classes. This year, Arizona introduced a bill that requires schools to obtain written permission from parents in order to teach any form of sex ed and secures parents' rights to opt out on behalf of their kids. Adults are desperate enough to control sex in their own lives -- from the content of their, or their spouse's, fantasies to the threat of infidelity. And, of course, there's that universal desire to protect our kids from the dangers of the world (and you don't have to be a right-winger to believe that sex can be dangerous).

Together, these recent bills make clear several fundamental fears -- of the power of sex, of losing control of our kids and of the allure of non-procreative sex without consequences. Aside from their magnitude, those worries aren't a uniquely right-wing phenomena. What is uniquely right-wing is taking such extreme attempts to legislate against those fears.