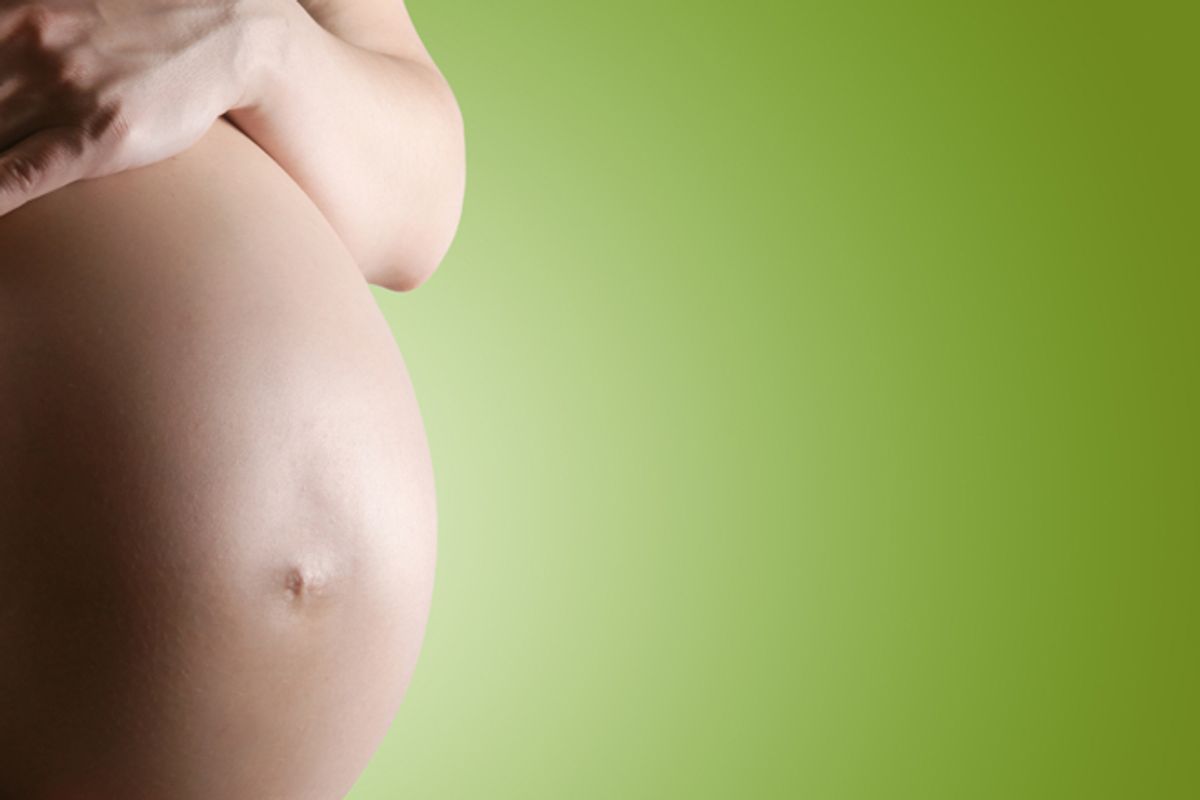 I’m standing in front of my house in a light rain, in the altogether, eight-and-a-half months pregnant, while a photographer snaps photos. I’m tucked into the hedge, hoping the neighbors don’t have a view from their windows. I’ve never been so happy to be naked.

A year earlier, I had tumbled into a mid-life crisis. I had one child who was nearly three, and my husband and I were planning for a second. This had always been our intention, and I approached this second foray without much anxiety. But when my younger sister called to tell me she and her boyfriend were going to London, something inside my head was knocked loose. “Damn,” I thought. “I’m going to be a MOMMY.”

Yes, I know what you’re thinking: You’ve been a mommy for three years. Get over it.

But it wasn’t the prospect of becoming a parent that freaked me out. I loved my little boy and wanted to add another goofball to the family. What threw me into a tizzy was the prospect of being a mommy and all the cultural baggage that came along with it. With one child, you could be that interesting woman with the cute kid who still retained a modicum of cool. But the second child would define you. This is faulty logic, I know, but I believed it nonetheless: A mommy is invisible. A mommy has bad jeans and a minivan. Twenty-five-year-old boys would never check me out. I would never take off to London on a whim.

No matter that I was never that cool or adventurous in the first place. I was the high school valedictorian, the Goody Two-Shoes. I’d had two boyfriends and married one of them. I always win “I’ve Never” because, really, I’ve never. But now I had no chance to be cool. Any possibility was off the table. I considered getting a tattoo or tarting up my wardrobe, but then I realized that doing these things to avoid being a mommy cliché was a cliché in and of itself.

Eventually, I realized I needed to get over myself. The demands of parenting a small child did not leave time to wallow, and at lucid moments I recognized that I would not have young kids forever. I would be able to go to London someday, and I didn’t have to drive a minivan. But my mommy fears still nagged.

A year later -- pregnant as can be and irreversibly a mommy -- I learned that a favorite local photographer was looking for models for a project on pregnant women. It was an appealing proposition, but there was a catch: She wanted nudes. I dismissed the idea; I couldn’t do a nude photo shoot. But I also realized I did not want to be the type of person who would say no to this.

This is how I found myself in my yard in the nude. I had spent an hour posing with my clothes on — the black bike shorts and black tank that had become my uniform in those sweltering final weeks. The photographer, Ellen, posed shots of me contemplating my belly on the back deck, family portraits in front of a nearby dilapidated barn, and shots of my boy and me frolicking in the neighboring cemetery. We chatted while she clicked away: about pregnancy, our kids, our town, and her work, and I tried not to think about where this was leading.

Eventually it started to rain and we ducked into the front yard, sheltered by a tall hedge. I ignored my misgivings, summoned a little confidence, and shed my clothes.

All along, I hadn’t been sure I could strip. I may not be the person so neurotic she changes in the bathroom at the gym, but I’m also not the woman who wanders around the locker room stark naked. I’ve often struggled with my weight, and I fight the urge to hide my body: too much belly, too much breast, flab and curves where I don’t want them.

But pregnancy gave me a freedom with my body that I didn’t have before and haven’t had since. At nearly nine months, my body was supposed to look like this. I was supposed to have an enormous belly, giant breasts, and a little something extra in the back. I could have done without the tree-trunk thighs, but I could live with those, too. Much to my surprise, revealing this body felt fine. So did the rain on my skin — it was awfully hot being pregnant in June.

Once Ellen began shooting, I adopted a strategy of “don’t look down.” It was best to ignore the absurdity of standing in our tiny front yard, separated from the sidewalk and street by only a hedge. As the shoot progressed, I felt an amazement that I could do this, that I was doing this. I can still see it in the small, pleased smile I’m wearing in the photos. It is equal parts relief, surprise and satisfaction.

Looking at the photos now, years later, I feel a bittersweet pang for those last few days when we were just three, before we became something new. I’m gobsmacked not only by the size of my belly and breasts but also by my nerve.

Later that day, after Ellen left and I had dressed, my husband observed, “Now you’ll never have to get a tattoo.” I’m grateful for that. And I’m grateful that the postman didn’t choose that moment to deliver the mail.

Megan Rubiner Zinn lives in Western Massachusetts with her husband and two sons. Her work has appeared in Jezebel, the Daily Hampshire Gazette (Northampton, MA), VisualThesauraus, and her blog, life in the little city.