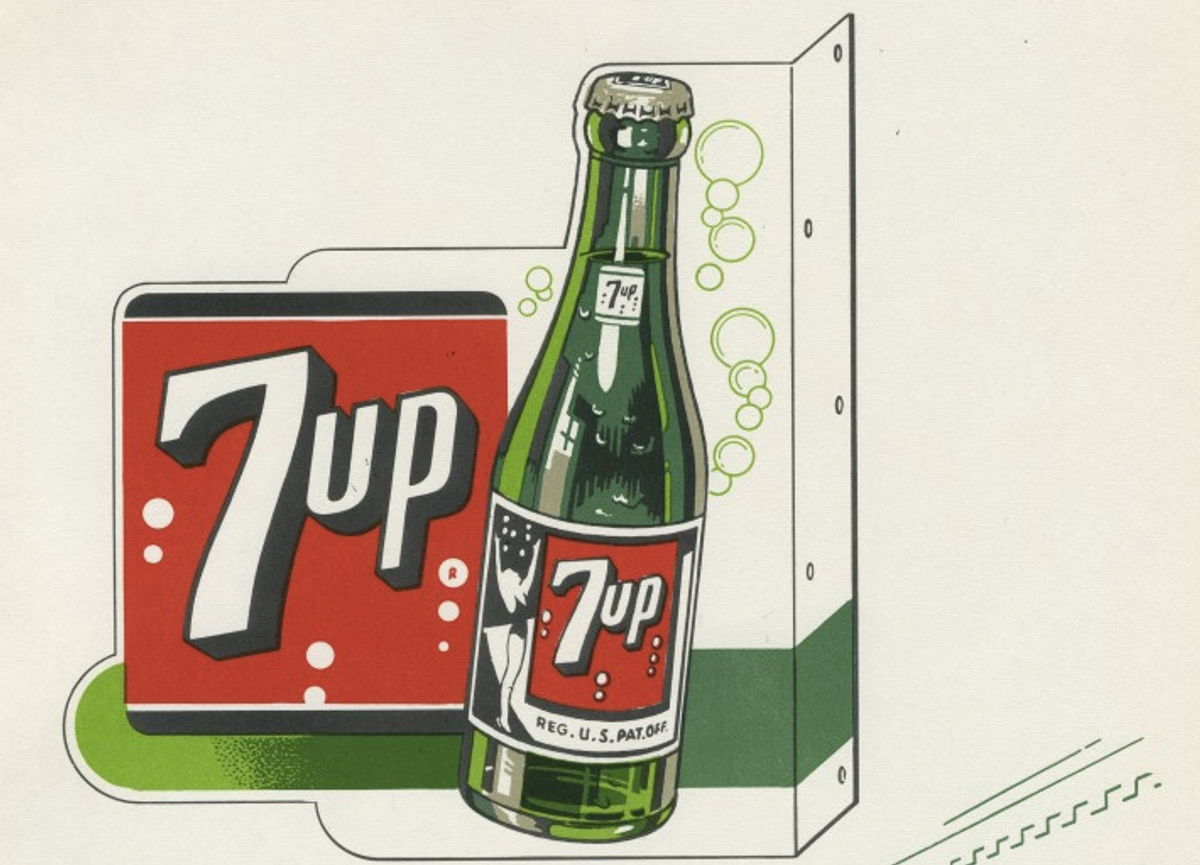 I became interested in pop bottles (I grew up in the Chicago area where we all said "pop") and related stuff when I was about 12 years old. I had gone inside an old garage that was attached to a neighborhood house that was being torn down and inside was a cache of un-returned pop bottles that must have dated from the 1940-'50s period. I took one of each type home (about 20 of 'em) and yes, still have them to this day. I really got off on all the different labels and colors of glass and because I used to like to read old magazines I actually recognized most of the brands that were no longer around or had changed their design. I'll go into this more in a future post, but wanted to lay some sort of a foundation for this piece, which is exclusively on 7Up, with a special focus on their branding efforts of the 1950s.

The soft drink that would be known as 7Up was created in 1929 by Charles Leiper Grigg in St.Louis as part of his "Howdy" line of sodas and was originally called "Bib-Label Lithiated (it contained the mood stabilizer lithium citrate until 1950) Lemon-Lime Soda." It was almost immediately re-labeled "7 (7 natural flavors) Up Lithiated Lemon-Lime," and then finally just "7Up".

In terms of logos, an original winged trademark soon gave way to the red squared logo that lasted until the late 1960s that coincided with that period's brilliant "Uncola" re-branding campaign. I always felt they had GOLD in that Uncola moniker. . .

By the late 1940s 7Up was the third most popular soft drink in the United States. By the time the 1950s rolled around, the company had employed extensive branding techniques to keep the momentum going. The following three binders contain examples of what was offered to the bottlers and distributors to reinforce the product's presence.

[caption id="attachment_308791" align="aligncenter" width="435" caption="Before everyone had TV's in their home, it was common to go out to watch television."]

[caption id="attachment_309191" align="aligncenter" width="368" caption="2 actual decals using the older logo with the woman reaching for bubbles- love the way the color is broken down into separate shapes and levels."]

[caption id="attachment_309061" align="aligncenter" width="442" caption=""Fresh Up Freddie" was the 7Up mascot created in 1957 by ad agency Leo Burnett and Walt Disney to help sponsor the Disney "Zorro" TV series."]

Here's a link to more info on "Freddie": http://www.cartoonbrew.com/disney/fresh-up-freddy.html

[caption id="attachment_309461" align="aligncenter" width="310" caption=""Like" was introduced in 1963 as a diet version of 7Up. It contained Calcium Cyclamate which was determined to be a carcinogen in 1969. "Like" was discontinued in that same year and Diet 7Up was introduced in 1970 sans the Cyclamates. This bottle is dated 1964."]

As a final footnote, I was lucky enough to work on spots for 7Up International using the Susan Rose/Joanna Ferrone character "Fido Dido"! Here's one of my favorites done while I was at the Ink Tank Studio in N.Y.: http://www.youtube.com/watch?v=8JpHjeGXyw8