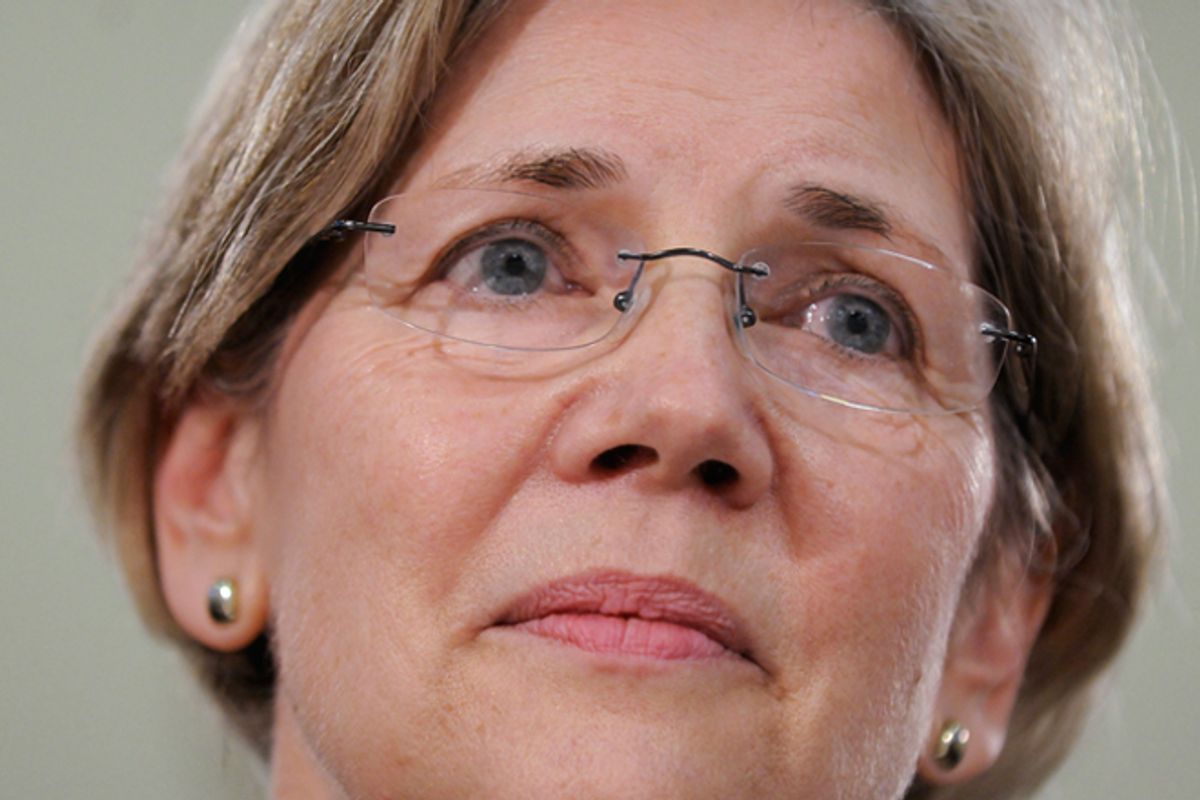 The story about Elizabeth Warren's Native American heritage refuses to die. Today, state Republicans are calling on Harvard to investigate whether Warren used her Native American status to land her teaching post. Some Democrats, haunted by the infamous meltdown of Martha Coakley against Scott Brown two years ago, are wondering if it’s déjà vu all over again.

"The people in Washington are saying, 'The people in Massachusetts are a bunch of fuck-ups who couldn't run a race for dog catcher,'" said one veteran Massachusetts Democratic insider. "This is someone they handpicked, filled the coffers with millions and millions of dollars, made it their number one race, and the people who are up here running it with every resource you would ever want are getting killed."

The Boston Herald broke the story April 27 that Harvard touted Warren’s Indian ancestry, and it’s been downhill since for the Senate hopeful. A genealogist has suggested Warren is 1/32 Native American, although the campaign has not provided documents backing her claim. Warren spoke in one interview of grandparents with “high-cheekbones.”

Joe Trippi, the prominent Democratic consultant, said the response to the initial stories raised questions in the nation’s capital about the campaign’s readiness to deal with a dangerous foe.

“There is a question about why they weren't prepared,” Trippi said. “This happening in May is a wake-up call. They have to be ready for a much tougher fight than they envisioned.”

Warren should have expected such attacks: Brown's chief strategist, Eric Fehrnstrom, is famous for confrontational tactics. “It's great to be out there trying to make a case for working people, but the other side is not going to let you do that -- Fehrnstrom doesn't work that way,” Trippi said. “He's going to try and make it into a knife fight. You have to be ready to make the process case and fight back.”

There’s a growing concern that Warren’s campaign has been too passive in its clashes with Brown, indeed that they’ve been too one-sided.

Dan Payne, a veteran Democratic consultant based in Boston, said the non-handling of the Native American question is part of a larger problem that has plagued the presumptive Democratic nominee.

Democrats don’t like to use the “C” word -- Coakley. But Payne said, like Coakley, who didn’t understand she needed to shake hands outside a chilly Fenway Park, Warren doesn’t seem to know what to do with Brown.

For instance, Brown got free media showing he hit a half-court basketball shot – even though he needed several tries. The shot builds on his regular guy image, which neutralizes Warren’s arguments she stands up for the regular guy, Payne said. Yet, you never heard Warren ever smack him down.

“So far, Warren has shown an inability to deal with Brown’s use of symbols,” Payne said.

Warren’s chief strategist is Doug Rubin, who masterminded Gov. Deval Patrick’s two improbable victories – both based on positive campaigning and avoiding negative attacks. Fehrnstrom, meanwhile, gets out of bed thinking how to attack, said Payne.

Even before Warren entered the race, Fehrnstrom anonymously tweeted as Crazy Khazei, lobbing broadsides aimed at her while disguised as a loony version of another Democratic rival, Alan Khazei – until he was unmasked.

“It’s been very mean and it’s only going to get meaner,” said Michael Shea, a Democratic consultant. “They’ve raised $30 million and it’s not going toward positive ads, and it’s only just begun.”

There’s no doubt the Senate race is going to be nasty. It’s had a negative tone from Day One, when Brown – in response to a joke Warren made about him paying for college by posing nude – quipped on a radio show he was glad the 52-year-old hadn't done the same.

The Native American story may appear an isolated one but it’s part of Brown’s strategy to craft a narrative about the first-time candidate, said Peter Ubertaccio, chairman of the department of political scientist at Stonehill College.

“You do that by raising questions about who she said she is and hold up who is in tune with average voters and is more like average voters,” Ubertaccio said.

In a statement, Warren's campaign said:

Elizabeth has been straightforward and open about her heritage while the people who recruited her have made it clear it was because of her extraordinary skill as a teacher and a groundbreaking scholar. Scott Brown has been peddling nasty insinuations to distract from his million-dollar tax returns and multi-million dollar Wall Street fundraising. We’re getting back to the issues that really matter in this election, like how to level the playing field for middle class families."

Democrats aren’t giving up on Warren.

Washington has tried to bolster Warren, Payne said. For instance, the president is signaling his support by appearing in an ad with Warren running on television stations statewide.

Trippi noted that while the Republicans drag out the story about her native roots, Warren’s campaign continues to show positive signs – and it’s only May.

“[Brown] scored,” Trippi said. “But she’s raising money, she has a very strong message, and the people know she’s fighting for the working people of Massachusetts.”

But Brown isn’t giving up either.

“Scott Brown takes this very seriously,” the Democratic insider cautioned. “This is control of the United States Senate. This is big stuff.”