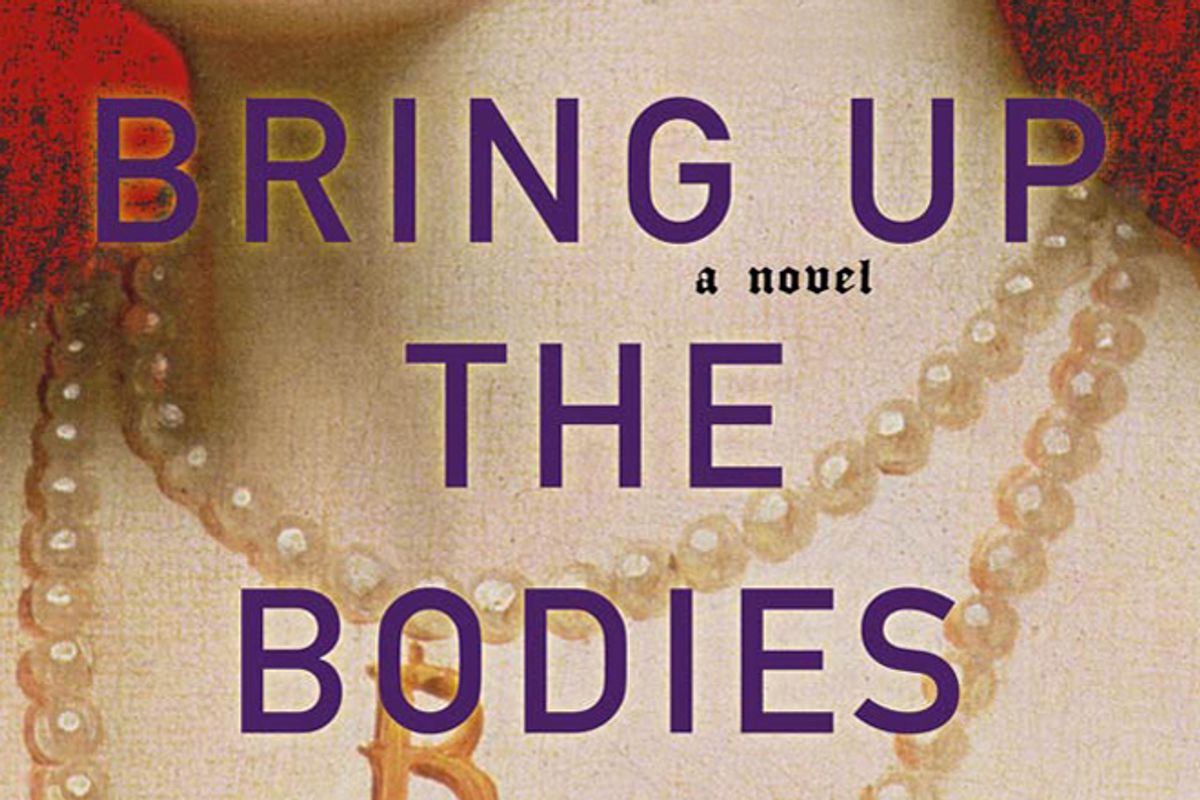 "Bring Up the Bodies," Hilary Mantel's follow-up to her Man Booker Prize-winning 2009 novel, "Wolf Hall," is a high-wire act, a feat of novelistic derring-do. Mantel makes bold not with form -- by now meaningful experimentation in that area seems exhausted -- but with the very material that brings most readers to novels in the first place: our imaginative identification with fictional characters and the experiences we feel we're sharing with them.

As with "Wolf Hall," the central character in "Bring Up the Bodies" is Thomas Cromwell, master secretary to King Henry VIII of England. The son of a drunken, abusive blacksmith, Cromwell has risen about as high as any commoner could hope to, entirely on the strength of his acumen, industry, cunning and resilience. As an often-quoted passage from "Wolf Hall" declares, "He is at home in courtroom and waterfront, bishop's palace or inn yard. He can draft a contract, train a falcon, draw a map, stop a street fight, furnish a house and fix a jury."

This is, incidentally, Cromwell's own assessment, but he's saved from vanity by the fact that his confidence is not just well-placed but precisely placed; he is the ultimate realist, and he possesses that most potent of assets, an excellent knowledge of himself. In the thousands of fictional retellings of Henry's reign -- most of them focused on his ambitious second wife, Anne Boleyn -- Cromwell is typically depicted as a ruthless schemer. He got rid of Henry's first wife, Catherine of Aragon, when Henry wanted Anne, and he got rid of Anne, too, when the time came. The first ejection led to the foundation of the Church of England and the second to the execution of six people.

As Mantel tells it -- she describes the novel as "a proposal, an offer," rather than an assertion of historical truth -- Cromwell represents the vanguard of a new era, one in which ability trumps noble birth. He can countenance any number of insults from the arrogant aristocrats he works with because he knows that "chivalry's day is over. One day soon moss will grow in the tilt yard. The days of the money lender have arrived, and the days of the swaggering privateer; banker sits down with banker, and the kings are their waiting boys."

He would never dream of voicing such thoughts, of course, and part of the marvel of Cromwell the character is his self-control. "I never forget myself," he tells the ambassador from the Holy Roman Empire at a moment when his temper has been sorely provoked. "What I do, I mean to do." The style Mantel employs to write about this exemplar of the will is declarative to the point of bullishness; her voice is his. The character's allure lies in his energy and his resilience, and it's thrilling to hitch your readerly perspective to a man who can seemingly do anything and furthermore has the nerve to try.

But if Cromwell is a man of action, he's also, at age 50, prone to reflection and haunted by the dead. "Bring Up the Bodies" opens with falconry in the picture-book English countryside during the king's summer "progress" (a sort of nationwide tour) of 1535. Cromwell's falcons are named after his two daughters, who, with his beloved wife, died in London's intermittent epidemics. He hasn't forgotten them, but it's significant that he's memorialized them as birds of prey. Above all, Cromwell nurses a grudge against all who participated in the downfall of his mentor, Cardinal Thomas Wolsey. Yet, he is not without warmth. A conscientious and covertly tender householder, he presides over the lives of assorted dependents from various social classes. His carefully concealed soft spot for distressed gentlewomen and exiled court figures like Catherine and her daughter, Mary Tudor, leads him to make small but largely unappreciated efforts on their behalf.

We are shown that Cromwell is ruthless -- there's passing mention of hangings in Ireland, among other things -- but we also know that he is loyal. This is his saving virtue. His allegiance is to England and to Henry, who, like the late Cardinal, has recognized his worth and raised him up. Some of the more notorious highlights of Cromwell's career -- the dissolution and sacking of monasteries and other Church property and the execution of Thomas More, depicted in "Wolf Hall" -- are cast in this light: England's riches should belong to the state, not to Rome, and be utilized for the benefit of her king and people. Like a modern Labor Party politician, Cromwell tries to pass poor laws and work programs in the face of mighty resistance from Parliament and the aristocracy.

Throughout the first two parts of "Bring Up the Bodies," this is the Cromwell we accompany. He is the king's most valued councilor and is effectively running the country. His enemies are preening, scornful and often foolish noblemen, out to promote clannish interests or reconciliation with Rome. Anne Boleyn, his former ally, has turned on him, and turned off the king. "He has always rated Anne highly as a strategist," Cromwell thinks. "He has never believed in her as a passionate, spontaneous woman. Everything she does is calculated, like everything he does," yet she has overestimated her own security. They are two of a kind, perhaps, but unlike him, she has let her success go to her head and will, in consequence, lose both.

Discouraged by Anne's inability to give him a son and harried by the vixenish ways that once enthralled him, Henry falls for Jane Seymour, "a plain young woman with a silvery pallor, a habit of silence and a trick of looking at men as if they represent an unpleasant surprise." It becomes Cromwell's job not only to clear the way for Jane to become Henry's third wife, but to make the king feel that he is justified in discarding a second spouse. Cromwell pursues this goal in the conviction that sooner or later Anne would have come after him and his friends.

That's the setup, but as the interrogation and trials of Anne and her alleged lovers commence, Mantel carries the reader into harrowing territory. Cromwell tricks a foppishly romantic musician into boasting of having slept with the queen (Mantel does not endorse the view that the man was tortured into this admission) and conducts a series of interviews with the four doomed noblemen accused of being her lovers and of plotting against the king. The four also happen to be Cromwell's political enemies and, furthermore, key participants in a satirical court entertainment that depicted Cardinal Wolsey being dragged to hell by devils. "He needs guilty men," Cromwell tells himself. "So he has found men who are guilty. Though perhaps not guilty as charged."

Political horror is not a new literary mode -- you can find it in the New Testament as well as in such 20th-century works as George Orwell's "1984." However, the protagonist in those stories is invariably the victim. "Bring Up the Bodies" devotes 270 pages to developing its hero, investing the reader in the superiority of his personality and cause, and then ushers him into the interrogator's chair. Cromwell is contriving to send these people to the scaffold for crimes they quite possibly did not commit, however "guilty" they may be of others. Because he is our man ever bit as much as he is Henry's man, we are, in some obscure way native to the laws of fiction, implicated. These are not easy chapters to read, although they are magnificently realized.

As assured as her implacable protagonist, Mantel walks the edge of a very sharp knife in the last part of "Bring Up the Bodies." I don't believe she cuts her feet on it, but sometimes it felt as if she were cutting mine. It's impossible to repudiate Cromwell, but embracing him has become infinitely complicated. Of all the many fictional depictions of the moral quandaries involved in the exercise of great power, this may be one of the most disturbing. It comes much closer than any I've ever encountered to letting you know how it must feel to manage the fate of a nation: how intoxicating and how very, very perilous.