If he really is interested in 2016, he can’t fall too far behind his own party on gay marriage 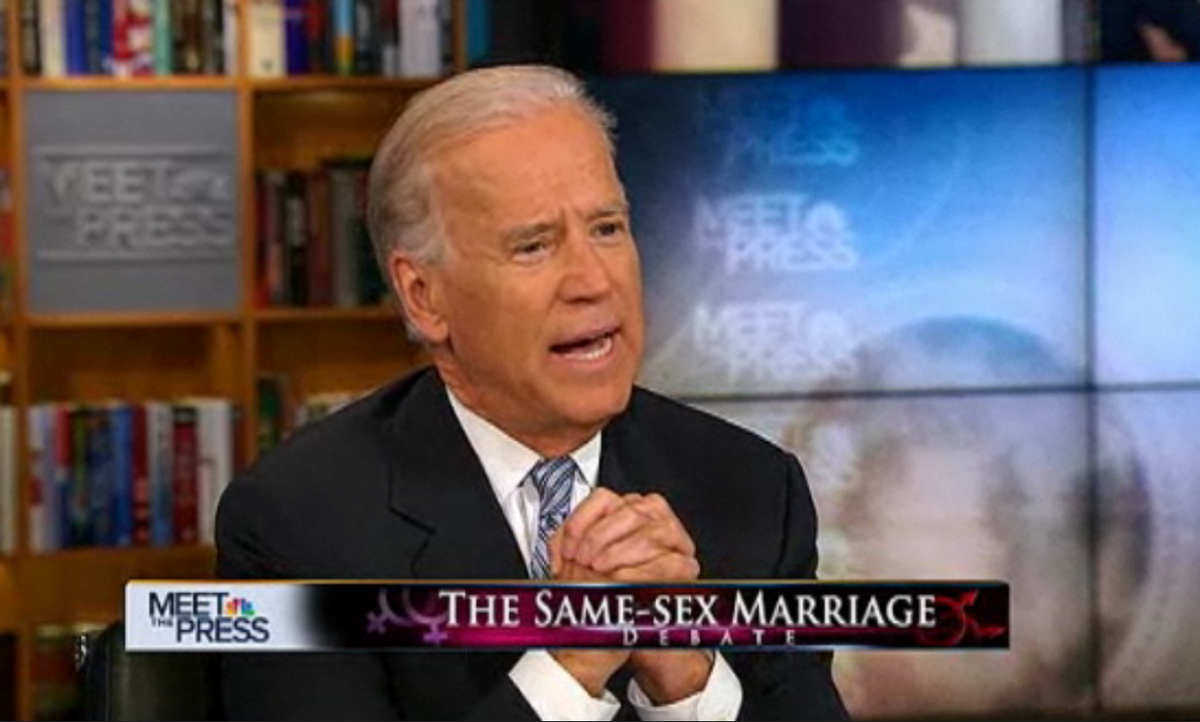 No one knows quite what to make of Joe Biden’s apparent endorsement of same-sex marriage on Sunday.

At least initially, some took the vice president’s pronouncement that he’s “absolutely comfortable with the fact that men marrying men, women marrying women, and heterosexual  men and women marrying another are entitled to the same exact rights” as a trial balloon – a way for the White House to test public reaction and determine whether it’s safe for President Obama to join the pro-marriage equality chorus.

But the speed and force with which Obama’s camp downplayed Biden’s statement (and Biden’s own subsequent clarification that he, like Obama, is merely “evolving” on gay marriage) suggests it may just have been just another of the off-script moments to which the vice president is prone. There’s also a theory, proposed by TPM’s Josh Marshall, that the entire episode amounts to an elaborate plot by the White House to subtly shift Obama to a pro-gay marriage position without anyone really noticing.

If you consider Biden’s gay marriage remarks in the context of his entire “Meet the Press” interview, though, a different possible motive comes to mind: Maybe he was just thinking about himself.

The key moment came when David Gregory asked Biden whether he or Hillary Clinton is more likely to run for president in 2016. Biden joked that he and the secretary of state might run as a team, then added: “I don’t know whether I’m going to run. And Hillary doesn’t know whether she’s going to run.”

This is hardly the first sign that Biden, who sought the presidency in 1988 and 2008, still harbors White House aspirations. At the start of his term, the vice president said he wouldn’t rule out ever running again, and Politico reported recently on a series of staffing decisions that strongly suggest Biden wants to be in the ’16 mix.

And if positioning himself for ’16 is on Biden’s mind, then the politics of gay marriage are much different for them than they are for his boss, who will (presumably) never run for office again after 2012 and is interested only in maximizing his appeal to this year’s general election swing voters. Biden has to worry about this year too, obviously, but to be a contender for ’16, he needs to build and sustain as much goodwill as possible with his party’s base. And by now, rank-and-file Democrats are far, far ahead of the Obama White House when it comes to gay marriage.

The pace of the public’s evolution on the issue is kind of amazing. Just eight years ago, when a Supreme Court decree in Massachusetts thrust gay marriage into the Bush/Kerry debate, an NBC News Wall Street Journal poll found that voters overwhelmingly opposed its legalization by a 62 to 30 percent margin. Two months ago, the same poll found plurality support for gay marriage, 49 to 41 percent. Among Democrats, according to the newest NBC/WSJ numbers, support now stands at 67 percent – up from barely over 50 percent in 2008. At this rate, the number could be well over 75 percent by the time the ’16 race formally kicks off.

As I wrote last month, many prospective Democratic candidates for ’16 have already explicitly endorsed gay marriage, including Martin O’Malley, Deval Patrick, Dan Malloy, Russ Feingold, Sherrod Brown and Elizabeth Warren. Andrew Cuomo made it the centerpiece achievement of his first year in office. And while Hillary Clinton remains officially opposed to gay marriage, her husband has endorsed it and she did speak favorably of the New York law Cuomo championed.

There’s a real risk for Biden and any other nationally ambitious Democrat who hasn’t evolved past Obama of falling too far behind the rest of their party on this issue. For all anyone knows, this might have been what the vice president was thinking when he opened his mouth on Sunday.