And that means, according to a new report, that Americans can expect to hear a lot less about income inequality 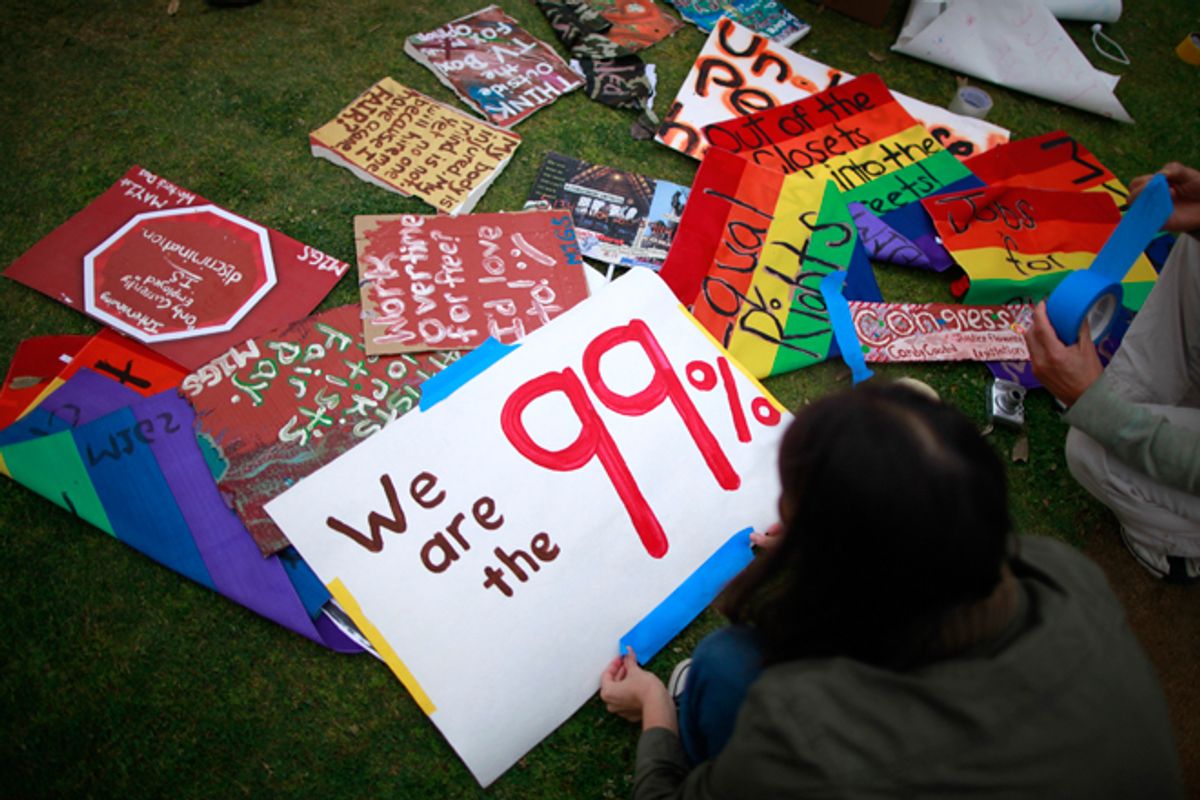 As evidenced by the lack of stories about the May Day general strike last week, the mainstream media's interest in Occupy Wall Street has waned. It's a shame because, as a new report indicates, Occupy has been central to driving media stories about income inequality in America. Late last week, Radio Dispatch's John Knefel compiled a report for media watchdog Fairness and Accuracy in Reporting (FAIR), which illustrates Occupy's success: Media focus on the movement in the past half year, according to the report, has been almost directly proportional to the attention paid to income inequality and corporate greed by mainstream outlets. During peak media coverage of the movement last October, mentions of the term "income inequality" increased "fourfold." Meanwhile:

As mentions of “Occupy Wall Street” or “Occupy movement” waned in early 2012, so too have mentions of “income inequality” and, to an even greater extent, “corporate greed.” The trend is true for four leading papers (New York Times, Washington Post, USA Today, Los Angeles Times), news programs on the major networks (ABC, CBS, NBC), cable (MSNBC, CNN, Fox News) and NPR, according to searches of the Nexis news media database. Google Trends data also indicates that from January to March, the phrases “income inequality” and “corporate greed” declined in volume of both news stories and searches.

Knefel notes that tokens of Occupy rhetoric -- most notably the idea of a "99 percent" against a "1 percent" -- has seeped into everyday cultural parlance. Since Occupy's inception last fall, references to "the 1 percent" don't elicit the response, "of what?"; these numbers are now understood far and wide to connote class disparity  -- even though many Occupy participants have at times felt the slogan too reductive to signify complicated socio-politico-economic issues. Knefel points out too "the danger, of course, is that 'the 1 Percent' simply becomes a buzzword and ceases to have any connection to the way American capitalism produces and reproduces economic and social inequality."

FAIR's findings prompt a number of critiques, both of the media's attention span and of Occupy's lasting power. It is a troubling state of affairs that in order to push conversations about rampant inequality in the press, it seems there needs to be continuous, headline-grabbing protests, occupations and public manifestations of anger (with newsworthy slogans, of course). But this should perhaps come as no surprise -- after all, it was in recognition of our very troubling state of national and international affairs that Occupy participants took to the streets, parks and encampments in the first place.

Occupy supporters may well be saddened by FAIR's news: that their important messages about corporate greed and class disparity have not permanently shifted the mainstream media's coverage of these issues. Knefel's report is at once a reminder of the long slog it takes to really shift a discourse. It's a reminder too that mainstream media outlets are fickle creatures, ready to move on to the next shiny object with little focus on the issues underpinning stories.

It's reasonable (although perhaps less so after the mass mobilizations in streets across the country on May 1) to debate Occupy's current relevance. For me, the problem highlighted here might not be a radical movement's failure to stay in the headlines, however; the fault is rather with a mainstream political and media machine that ignores economic and social inequality; hence the importance of radical movements. The question then becomes whether assemblages like Occupy should continue to work to hold the attention of such a machine, or work toward challenging its ability to determine political discourse.