Robert Caro's latest LBJ tome has everyone -- even Bill Clinton! -- hyping it. They've been had 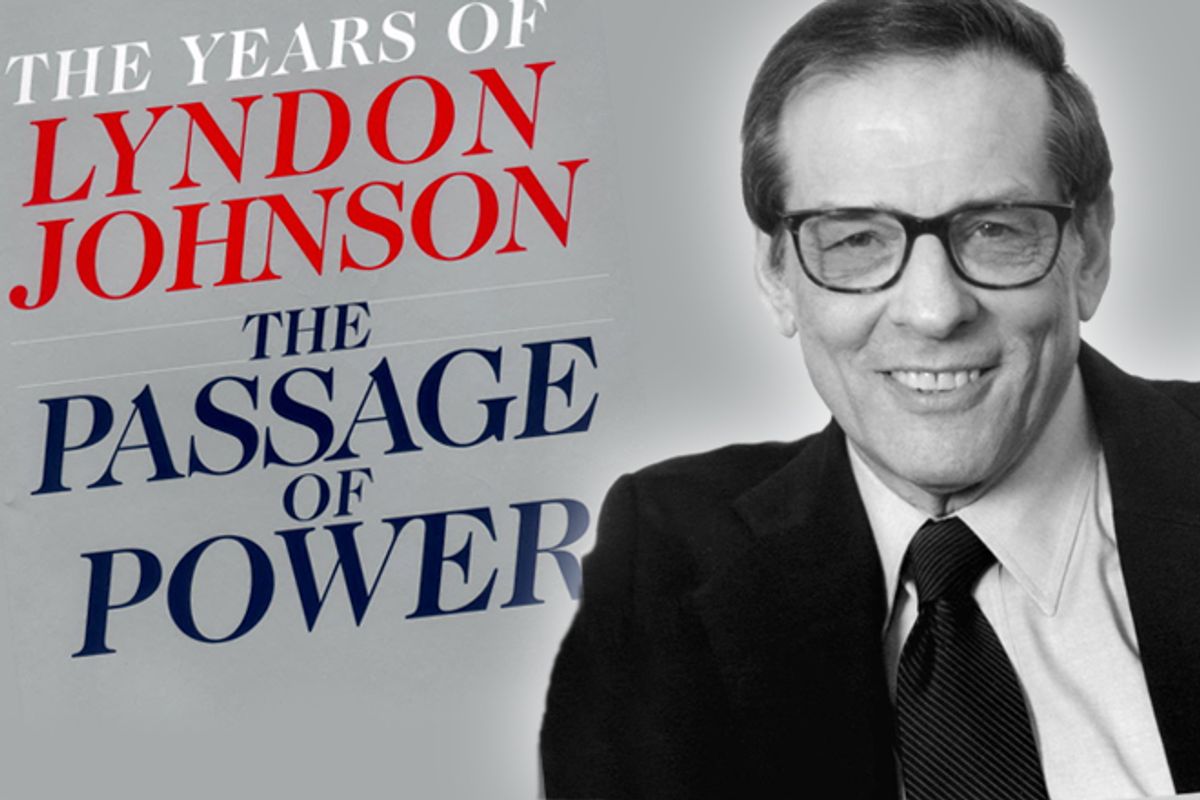 “Even the President of the United States sometimes must have to stand naked.” When Bob Dylan wrote that line in 1964, the naked emperor was Lyndon Johnson, which makes that image perhaps the most disturbing in all of Dylan’s apocalyptic work.

By stripping down Lyndon Baines Johnson to his essence, Robert Caro has himself become an American legend. Since the publication of "The Path to Power" in 1982, Caro has transformed LBJ’s life into a cautionary tale of Shakespearean dimensions. In some wonky circles, the release of a new volume is heralded like the Summer of Love release of “Sgt. Pepper's.” Can Caro possibly top his “Revolver"?”

I am proud to be one of those wonks.  Anticipating the release of "The Passage of Power," I went full-metal LBJ, and reread every word of the previous 1,040 page “prequel” – “Master of the Senate.” Much like catching up on the last season of “Mad Men” before the new one begins, I time-traveled like the hero from the new Stephen King JFK-themed novel back to 1958, as the Master Senator (and Master Biographer) prepared for their rendezvous with world history.

The release of this new book has seen Robert Caro morph from legend to Literary Saint, a transformation aided and abetted by the Northern Liberal Media that Johnson so ridiculed. Charles McGrath of the New York Times recently wrote a piece  where Caro’s monastic work habits, nurturing relationship with his longtime editor and publisher, and total immersion into the life of his subject is detailed in every, and I mean every, detail.

And after this lengthy profile and slide show, the Times then unleashed crack literary critic Bill Clinton for a hagiographic “review” – which, no surprise, revealed more about Clinton than Caro or, yes, LBJ. The final premiere event was the by now traditional preview of coming attractions in the New Yorker. This time, the sneak peek  excerpt was Caro and historical writing at its very best. Things you thought you knew, things you think you have seen, are transformed. The background of the iconic photograph of Johnson being sworn in as president next to a bloodstained and haunted Jackie Kennedy on Air Force One take on entirely new meaning through Caro’s literary filter. Here are the last words of the article. “The oath was over. His hand came down. 'Now let’s get airborne,' Lyndon Johnson said.”

Few works of fiction, let alone history, are written that vividly, and after reading those words and that article, well, that’s when I decided to go back into the 1950s Senate and the wonderful world of cloture, cloakrooms and clout. A symbolic 1,776 pages later – 1,040 of "Master of the Senate" and 736 pages of "The Passage to Power," here I now sit.

Caro also wanders off on tangents. These are not the fascinating tributaries of the history of the Senate that illuminated "Master of the Senate" or the luminous description of the Texas hill country in “The Path to Power.” Here there are chapters, long chapters, devoted to John Kennedy’s biography, even down to yet another recounting of the PT 109 saga. The chapter called “The Drums” seems entirely researched from watching readily available footage of the Kennedy funeral, with Caro’s insights on those days and that footage more appropriate for a DVD’s director's commentary.

There are, of course, priceless nuggets of research gold scattered in this meandering stream. In the second to last chapter (and first part of the tease to the next book), Caro recounts LBJ’s eager questioning of an aide when he hears Robert Kennedy had been shot. “Is he dead? Is he dead yet?” This wishful thinking even shocked Johnson’s staff, and by 1968, they were not easily shocked. And then, there were the odds. According to Caro, before accepting the purgatory of the vice presidency, Johnson had his staff look up the odds for a president dying in office. Those odds worked out to a little less than 1-in-4 for a modern president. And as Johnson said to Clare Booth Luce on the night of Kennedy’s inauguration, “I’m a gambling man, darlin’, and this is the only chance I got.” And we wonder why he gets cast as the fall guy in many episodes of "Conspiracy Theatre"? But apparently, Caro doesn’t want to go there -- any possible Johnson role gets dismissed in about a page.

My disappointment, as LBJ would say, comes “with a heavy heart.” The first book in the Caro series, “The Path to Power” and the third, “Master of the Senate,” are masterworks, deserving of any praise, hagiographic or otherwise. But the second, “Means of Ascent," seemed a padded-out novella – it could have been edited down to a single, long New Yorker piece. Same thing here. These 736 pages could have been culled to 250 and still hit their target very hard.

Caro assumes the reader has not read any of the others in the series, so endlessly recounts what he wrote in them. At the same time, he wants to make sure that the reader is panting for the next installment to arrive, hence a lengthy tease to the next work-in-long-progress. It's as if the 76-year-old author has made a deal for immortality, as long as he can just tease the reader into waiting another 10 years for him to get on with it.

Of course, each book should be able to stand by itself, and not require an act of devoted rereading before picking up the new one. Yes, but these books are also being written and produced as a definitive series, one long book now broken into five. They should stand with the big boys: Edward Gibbon's "Decline and Fall of the Roman Empire," Carl Sandburg's life of Lincoln, and Shelby Foote's three-volume narrative of the Civil War.

In Caro’s defense, although he treads water in “The Passage of Power," what water. His incisive look at the fear and loathing Johnson had for Robert Kennedy (and vice versa) is a highlight. There are flashes of descriptive writing that achieve a kind of Stephen King-esque kind of time travel. In the case of his account of the food at a Texas state dinner for German Chancellor Erhard, Caro’s literary powers summon a longing for a bib, a handiwipe and some of that thar barbecue. But these passages are few and far between, surrounded by lengthy flashbacks to previous books, long quotes taken from those same books, and even, quotes recycled yet again from the book you are still holding in your hand. The book cries out for the Ghost of William Shawn and a red pencil. How can a book take 10 years of obsessive work and still seem sloppy? It is no service to either Caro or history that he has achieved what every great writer thinks he wants, but should not necessarily have: an editor with Stockholm syndrome.

There is another non-editor-related problem that haunts this book. An omission that will definitely haunt the new work in progress no matter how exhaustively teased: the absence of the erudite voice of Bill Moyers.

Moyers was Johnson’s press secretary when the Credibility Gap was being invented and perfected. But he still has not spoken in any insightful detail of those days, to anyone. Thanks to the New Yorker excerpt, I did learn that Moyers was standing in the back of the crowd during that traumatic swearing in on Air Force One. He’s the guy with glasses, standing upper right. But although a recent profile mentions that Moyers shares an office building with Caro, he remains AWOL in “The Passage to Power."  Moyers has stated he is writing a book about Johnson where he will grapple with their shared past. But will he? One wonders if the long arm of LBJ will throttle him into silence. For a man of Moyers' eloquence and moral insight to remain silent, when even Robert McNamara finally and very publicly grappled with his demons, is a loss to Caro’s lifework, to history, and worse, to the America that Moyers has served so well.

McGrath and Clinton’s full admiration for Caro -- and their grudging respect for LBJ -- does make one wish that Caro had learned just a few things from The Master. Perhaps, in an upcoming elevator ride as he and Moyers head to their respective offices, Caro might grab Moyers by the lapel, pull him close, and give him a bit of persuadin’ to attend a Texas-style chinwag. Hope so. Time is not on either man’s side.

If the 10-year gap between Caro’s book and the 45-year gap since Moyers resigned during the "Sgt. Pepper" summer is any indication, time is not on our side, either.