Why we're not Greece 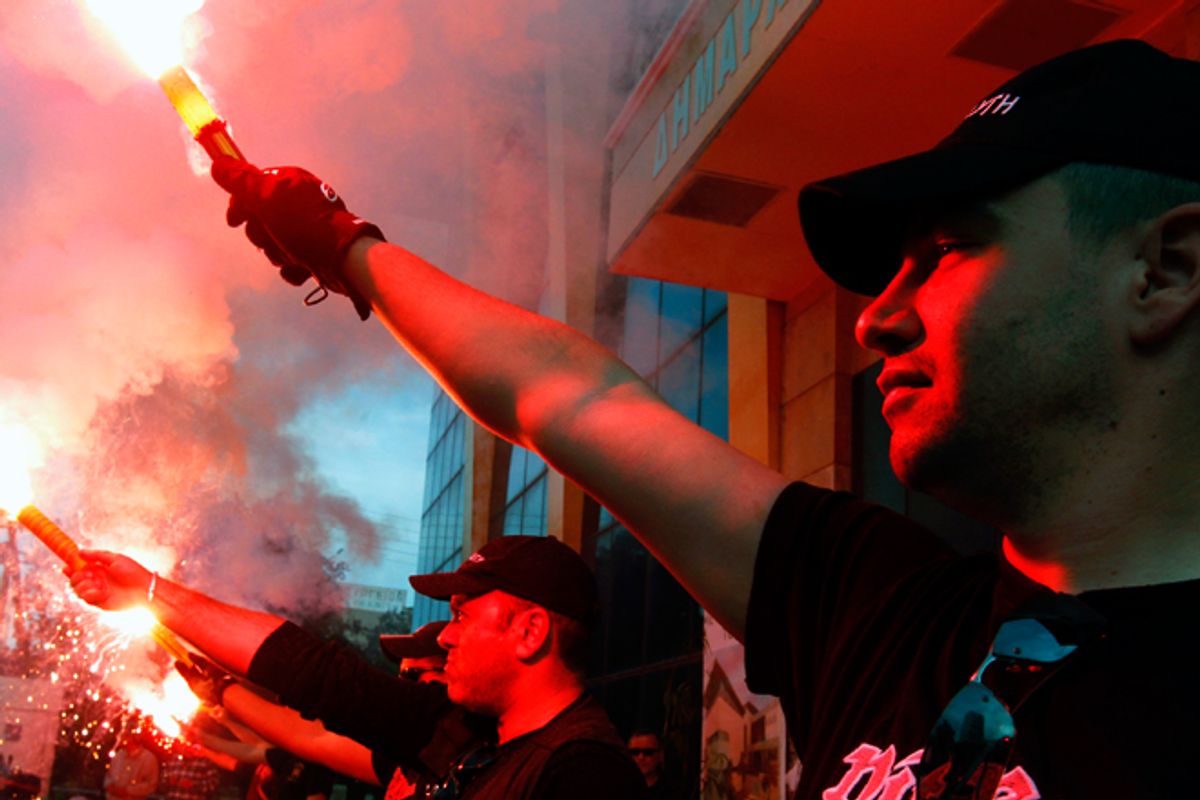 The sight of the Neo Nazi "Golden Dawn" political party scoring better-than-expected results in the recently concluded Greek elections underscores just how desperate the situation is in Athens right now. Many Greeks blame German-imposed austerity for creating 20 percent unemployment and the most dysfunctional economy in Europe. Historically speaking, Greece has also always prided itself on its resistance to the original Nazis during World War II. But as has been noted by numerous observers, economic depressions tend to nurture extreme political reactions. And suddenly, there are Greeks looking to Hitler for inspiration, while moderates are on the run. With the hard left and the hard right surging, and Germany's Angela Merkel continuing to stress a hard line on austerity, it's almost impossible to see any kind of reasonable solution to Greece's woes emerging from the current political situation.

The contrast with the U.S. is instructive. Back in the 1930s, Roosevelt saw the New Deal as an alternative to the socialist and fascist responses to the Great Depression in Europe. It worked. Today, as we watch two moderates fight it out for the presidency, it is worth wondering whether Barack Obama's pallid version of the New Deal -- the American Recovery and Reinvestment Act -- might have played a similar role in steering the nation away from a more extreme political climate.

The comparison is complicated by the fact that the stimulus (along with healthcare reform) itself encouraged its own extreme reaction: the rise of the Tea Party and the landslide GOP victory in the midterm elections. But it could have been worse! The latest economic number crunching from a study conducted by Fitch Ratings and Oxford Economics declares that Obama's stimulus added 4 percentage points to GDP growth. Absent the stimulus, the recession might never have ended and the 2 million new jobs that the economy has added over the past 18 months might never have happened. The opposite is more likely. If the U.S. has followed the example of Greece or Spain and responded to its recession with severe budget cuts, perhaps we too would be facing 15 or 20 percent unemployment. There's no telling exactly how that would have played out politically, but it wouldn't be pretty.

Of course, it isn't pretty now. The U.S. is technically out of a recession, but the recovery is fragile, unemployment is high, millions of Americans have given up looking for jobs, and the pressure to carve away at what remains of the safety net continues to intensify. What's so astounding about the current situation is that politicians don't have to look back 80 years to learn from history -- they just have to look across the ocean.