The gay election, at last

In the past few days, we 've seen how gay equality will be an unavoidable issue for both presidential campaigns 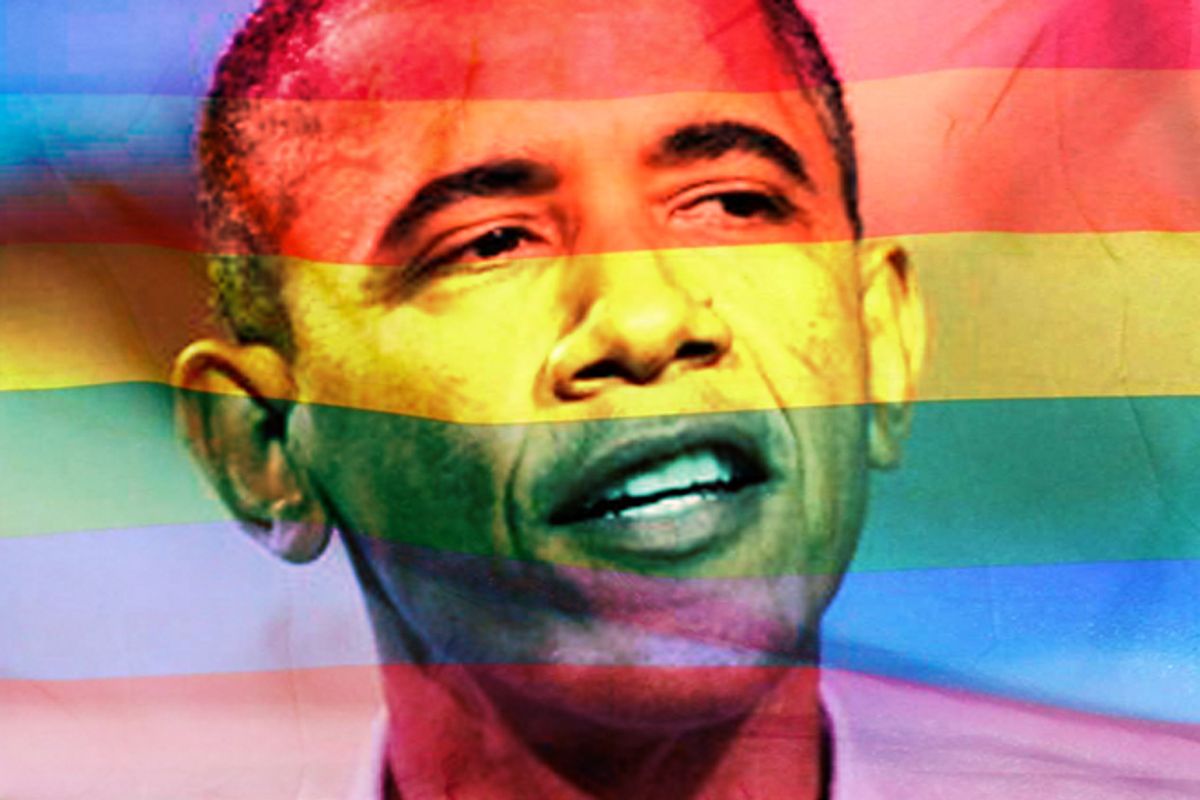 “The time has come,” says the hero of Tony Kushner’s award-winning play “Angels in America” in 1996. “We will be citizens.”

Looks like the 2012 election will be the moment. First, the Romney campaign appointed an openly gay foreign policy advisor, Richard Grenell. “It’s not an issue for us,” Eric Fehrenstrom, Romney's senior adviser, reportedly said after Grenell disclosed that he was gay.

Within days, religious conservative and plain old conservative opinion makers in the Republican Party orbit unleashed a tsunami of criticism. The gay diplomatic expert actually supported same-sex marriage; what does his appointment say about Romney’s commitments, they demanded to know. Told to lie low until the controversy blew over, Grenell resigned, leaving the Romney campaign looking clumsy or spineless (or both).

Before the Obama campaign could enjoy even a few days of superior risk management, Vice President Joe Biden went on "Meet the Press" to announce that he was “perfectly comfortable” with same-sex marriage. The White House spent the rest of the day in Grenell mode, arguing that Biden wasn’t signaling a mutation in the president’s evolving gay marriage position. The issue ate up most of press secretary Jay Carney’s press briefing yesterday, as inconsistency-sniffing media ordered him to stop reciting talking points and admit the administration’s position was nonsense.

Why is this happening? Gays are at most a small percentage of the population. Support for same-sex marriage just outpolled opposition within the last year. Wasn’t it supposed to be the economy, stupid?

Biden unwittingly revealed the answer when explaining why he was in favor of marriage. He knew so many people, he said, and saw what it meant to them and to their children. He told a story of attending a fundraiser at the home of a gay couple and how impressed he was with the way they were raising their children. Even among Republicans, as Grenell’s appointment reflects, gays are out and in too great numbers for the issue to be swept into the closet once again.

The last time the gay revolution was on the table during a presidential election was 1992. Then, Bill Clinton, revealing a most uncharacteristic naiveté about the political landscape, casually announced during a Q&A at Harvard that, if elected, he would lift the ban on gays in the military. He reiterated the commitment later at a gay fundraiser arranged by longtime FOB David Mixner. Although it didn’t cost him the election, Clinton’s premature suggestion of gay military service triggered a devastating battle in the very first days of his new administration and produced the loathsome "don’t ask, don’t tell," which embedded the exclusion into law, lasting 17 years. But that was then.

In the two decades since Clinton ran, America has changed and the change is bottom up, not the result of one man’s friendship with the inexperienced candidate. Partly because of the AIDS epidemic, which outed gay people from Roy Cohn to Rock Hudson, and partly because of the relentless ground game of gay organizations like Freedom to Marry, and partly because of, as Biden said, "Will and Grace," gay people are an acknowledged part of the social scene. When Democratic politicians started on the fundraising circuit after Congress repealed "don’t ask, don’t tell" in the 2010 lame duck session, they found to their surprise that it was the most popular thing they did all term.

Being visible, it now takes a visible effort to harm and marginalize them. The Republican right’s attack on the uber-conservative Richard Grenell and the graceless backward walk of the Obama campaign after Biden spoke demonstrate how ugly such efforts look when they are out in the open. It was one thing when black people willingly walked to the back of the bus. It was quite another when Birmingham sheriff Bull Connor had to use fire hoses to keep them down. Although it’s impossible to predict when the next incident will arise, it’s going to keep happening, certainly when the Democratic Party platform committee starts its deliberations. Smart campaigns would get out in front of the issue. Because there is no getting out of the way.