As temperatures break records, the GOP holds firm: The less we know about global warming, the better 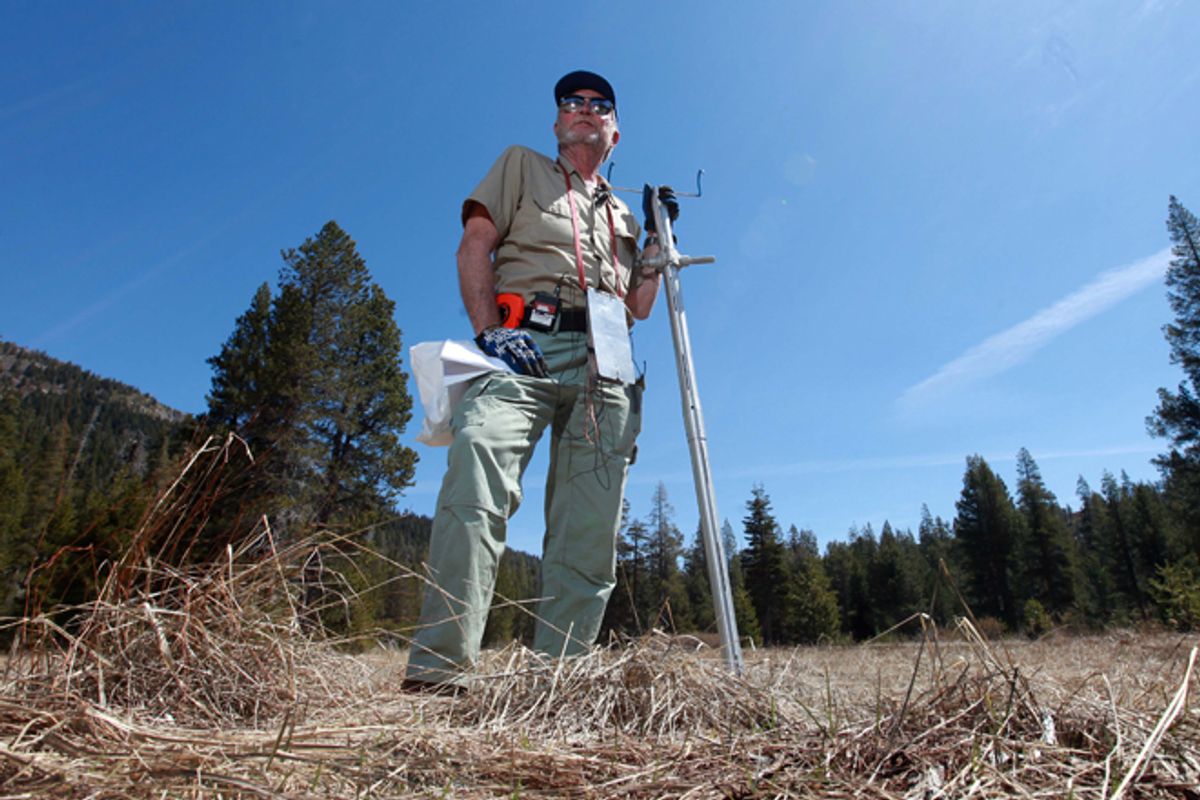 Frank Gehrke, chief of snow surveys for the Department of Water Resources, stands in a snow-free meadow at Echo Summit, Calif. Warm spring weather, combined with lower then normal precipitation, caused the statewide snowpack water content to be only 40 percent of normal for this time of year. (AP/Rich Pedroncelli)
--

Whatever adjective you choose -- ironic? tragic? ludicrous? -- the outcome of a series of budget votes held in the GOP-controlled House on Tuesday was definitely interesting. The chamber was wrangling over a series of amendments to an appropriations bill for the Departments of Commerce and Justice. The battle line was drawn between senior Republicans trying to resist further spending cuts, and young Turks looking to slash and burn.

In every case but one, the senior Republicans (with the help of Democrats) proved victorious. The lone exception? An amendment proposed by Maryland's Andy Harris, cutting $542,000 in funding for a climate website at the National Oceanic and Atmospheric Administration.

After all, who needs more information about the climate? It's not like there's been anything weird going on with the weather lately.

Oh wait. On the same day that the House voted to reduce funding for NOAA, the agency announced that the United States had just recorded its warmest 12-month period of temperatures since records started being kept in 1895.

The Washington Post provided some highlights of the report:

In the last year, the U.S. has experienced its second hottest summer, fourth warmest winter (December through February) and warmest March on record. And NCDC announced April 2012 was third warmest on record...

The degree by which some states and regions have exceeded their norms so far this year is incredible, and record-setting... The U.S. Climate Extremes Index - that tracks extremes in temperatures, precipitation and tropical cyclones - showed a record 42 percent of the country experienced extreme weather during the first four months of the year, primarily exceptional warmth.

The amendment's author, Andy Harris, is the chairman of a House Subcommittee on Energy and the Environment. He has previously criticized NOAA's funding requests for a climate-related initiative on the grounds that "the climate services could become little propaganda sources instead of a science source."

So, for fear of being exposed to propaganda, we'll just stick our heads in the sand and wait until our asses fry off. I guess it's better not to know what's happening to the planet, if we're not going to do anything about it anyway.