The loss of Dick Lugar will hurt most on foreign policy, where he was willing to buck Republican orthodoxy 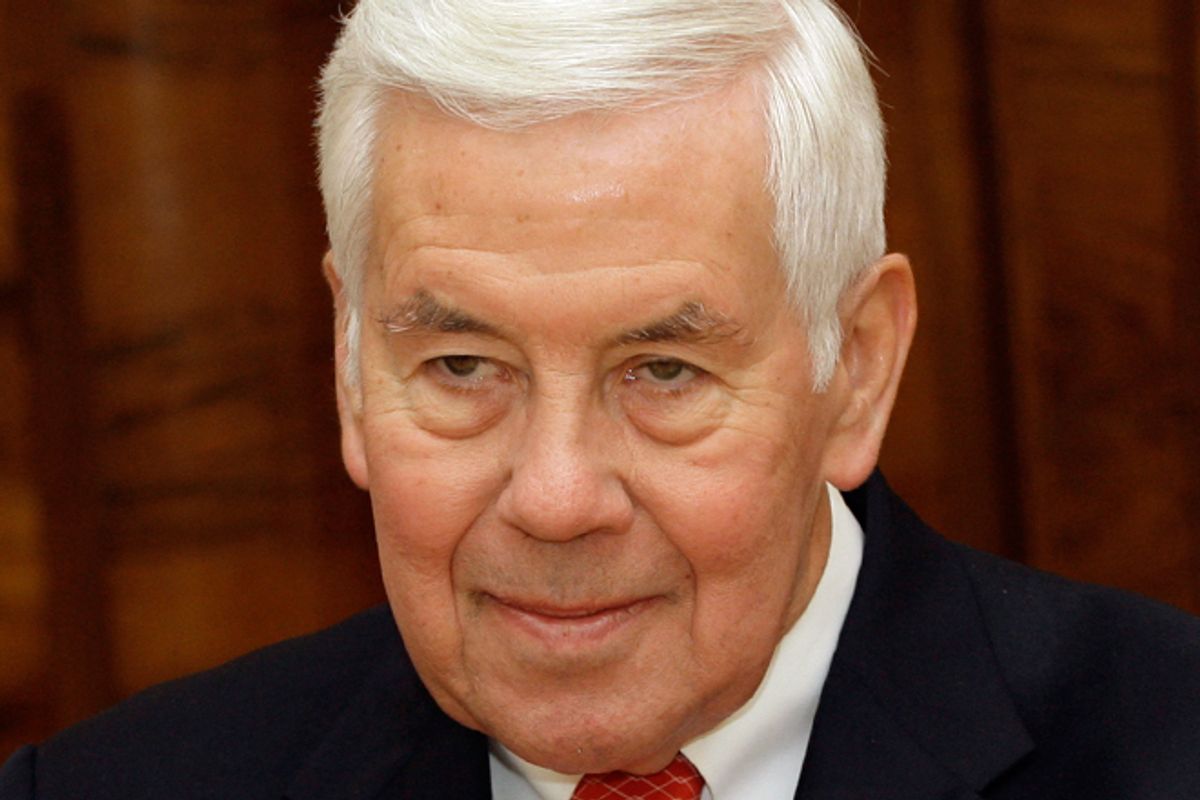 Eighty-year-old Republican Sen. Dick Lugar lost his primary on Tuesday night to Tea Party favorite Richard Mourdock. Third-party groups spent $4.5 million on the race, according to the Center for Public Integrity -- more than they've spent on any other congressional race this season. About two-thirds of that cash was spent defeating Lugar. The biggest player in the race was the FEC-violating super PAC Club for Growth Action, which spent more than $1.4 million.

The longest-serving senator in the state’s history, the “George Washington of Indiana” will be sorely missed. Not for his opposition to abortion rights, the stimulus package and Obama’s healthcare bill, nor for his votes against gay rights and for the flag-desecration amendment. No, what made Lugar matter were his important stances on foreign policy. His demise signals a further radicalization of Republican foreign policy that is already right-wing enough. Even a somewhat moderate Republican has no place in today’s GOP, it seems.

Lugar made a name for himself on international affairs in taking the lead in the Senate to reduce the world's use, production and stockpiling of nuclear, chemical and biological weapons. In 1991, he initiated a partnership with then-Senate Armed Services Committee Chairman Sam Nunn aimed at eliminating latent weapons of mass destruction in the former Soviet Union. To date, the Nunn-Lugar Cooperative Threat Reduction program has deactivated more than 75,600 nuclear warheads. In 2004, Sens. Lugar and Nunn were rightly jointly awarded the Heinz Awards Chairman's Medal for their efforts.

Though he voted for the Iraq War, he was one of the first Republicans to castigate President Bush for his handling of the war. “Our continuing absorption with military activities in Iraq is limiting our diplomatic assertiveness there and elsewhere in the world," he said on the Senate floor in June 2007. Then-Senate Majority Leader Harry Reid said, in reaction to Lugar's speech: "When this war comes to an end, and it will come to an end, and the history books are written, and they will be written, I believe that Sen. Lugar's words yesterday could be remembered as a turning point in this intractable civil war in Iraq.”

It wasn’t the only time Lugar broke party ranks on foreign policy. He castigated Republicans for opposing the 2010 START treaty with Russia, saying that voting against the treaty would jeopardize cooperation on reducing further weapons stockpiles. "There are still thousands of missiles out there. You better get that through your heads," he said to his party members.

Even better, Lugar has been stalwart on calling for the U.S. to increase its foreign assistance budget. Instead of a militarized foreign policy, Lugar looked for ways to make America’s diplomatic activities robust. “Lugar is a national treasure for his perspective on foreign affairs," P.J. Crowley, the heroic former State Department spokesman, told the Huffington Post in 2011. "Foreign aid does not have the political constituency that defense spending has ... and Lugar would be one of those people you would turn to to make the case for maintaining the global perspective on why foreign assistance is so important."

Not that Lugar’s loss can solely be chalked up to his bipartisan, moderate votes — although those certainly didn’t help his cause. As Geoffrey Kabaservice, author of “Rule and Ruin: The Downfall of Moderation and the Destruction of the Republican Party,” points out, there were other important factors involved. “Lugar is 80 years old, and he’s been in Washington for 30 years,” says Kabaservice. “It was easy to portray him as distanced from his constituents and a creature of Washington.” Lugar also did not foresee the amount of money the right-wing could devote to defeating him, especially in the age of super PACs. "Thank goodness the founder of our country did not face millions of dollars of negative advertising,” he griped last week.

Lugar was not a classic moderate Republican in the tradition of Eisenhower and George Romney, men who accepted the New Deal and were progressive on civil rights; he was simply willing to cross party lines and support Barack Obama on some issues. “Lugar was more of an Establishment Republican, which was certainly an honorable faction,” says Kabaservice. “He was a throwback to a time when bipartisanship was real.”

In practical terms, Lugar’s loss means that U.S. foreign policy will be less civilized, less responsible and less effective. Lugar’s long-standing service gave him a gravitas, and he was seen even by his opponents as a responsible voice. Says Kabaservice: “It will be more difficult for a president to conduct an effective foreign policy without him.”