The end of Dick Lugar 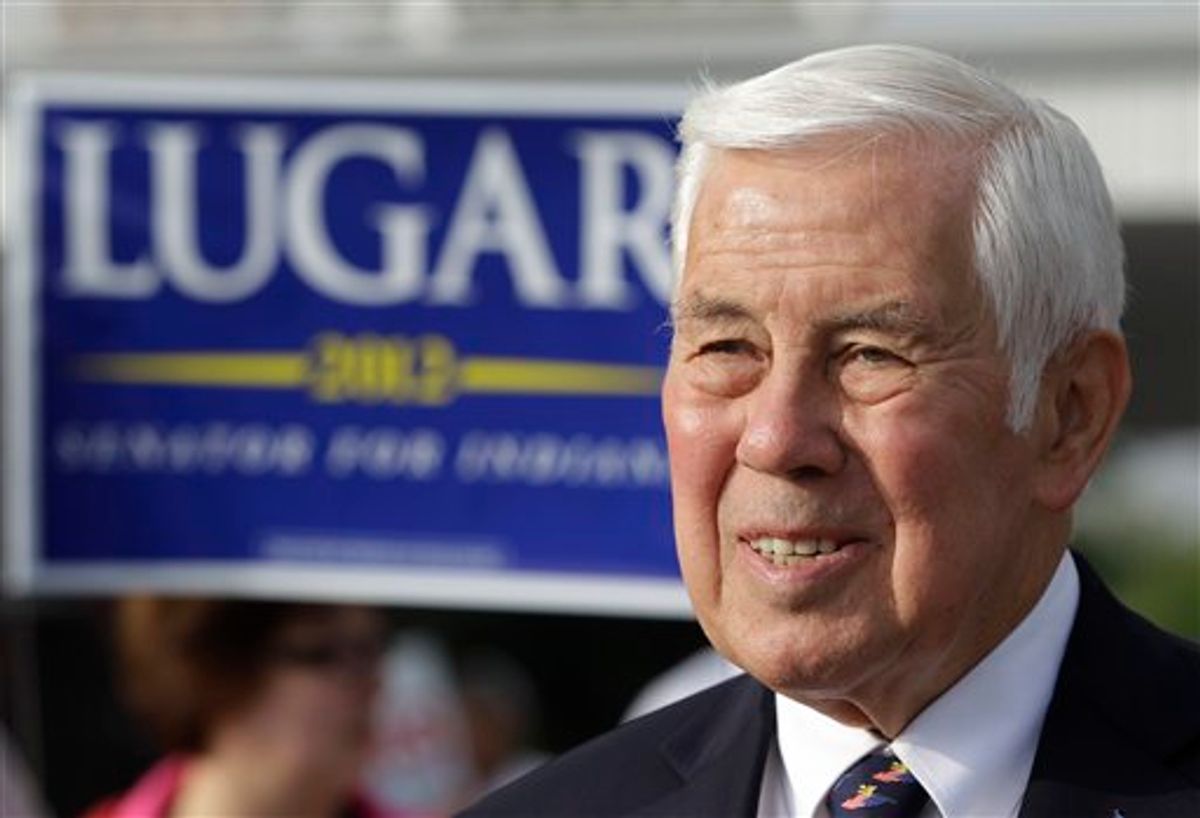 Sen. Richard Lugar meets with voters outside of a polling location Tuesday, May 8, 2012, in Greenwood, Ind. Lugar is being challenged by two-term state Treasurer Richard Mourdock. (AP Photo/Darron Cummings) (AP)
--

The romantic interpretation of Dick Lugar’s epic flame-out is that the long-serving senator was simply too proud and too principled to do what was necessary to survive. It’s also possible he was just too clueless.

Whatever the exact explanation, Lugar’s 36-year run in the upper chamber was ended on Tuesday night by his own party’s voters, who handed conservative challenger Richard Mourdock a 20-point landslide in Indiana’s Republican Senate primary.

The immediate effect is to create a general election Senate battleground that was on no one’s map until very recently. With Lugar as the nominee, Republicans would have been a lock to hold the seat in November. With Mourdock, the GOP remains favored to win, but because of his far-right views and the fact that he lacks Lugar’s cross-partisan personal popularity, there’s now at least a chance of a Democratic pickup.

Right on cue when Mourdock’s win was announced, the Democratic Senatorial Campaign Committee released a statement calling him “this year’s Ken Buck” – a reference to one of the Tea Party-aligned Republican Senate candidates in 2010 whose fringe image cost the party a winnable race. This may be wishful thinking, though. Mourdock has a limited profile in Indiana, but he has solid credentials and has won statewide office before (he’s current the state’s treasurer); it’s just as likely he’ll prove to be this year’s Pat Toomey, a similarly credentialed Tea Party candidate who managed to win Pennsylvania’s 2010 Senate race.

In the days ahead, there will be countless tributes to Lugar from his colleagues and from commentators, who will salute his seriousness, civility and willingness to work across party lines. Actually, it’s already begun, with John Kerry releasing a statement as the votes came in calling Lugar’s defeat a “tragedy.”

There’s something to this, especially when it comes to foreign policy and arms control, subjects that Lugar devoted himself to in the Senate, but it’s also easy to get carried away. Lugar’s independence had its limits, and his voting record has been reliably conservative and Republican over the years. He’s no Jim DeMint, but he’s also not an Arlen Specter.

This gets to the real significance of the Indiana result. Lugar’s loss is a blow to the Senate not so much because he’ll be absent from it starting next January but because of the lesson that the Republicans who remain will take from it. The rules and traditions of the Senate, after all, have long encouraged senators to conduct themselves as Lugar has, remaining generally loyal to their party but also exercising individual prerogatives as they see fit. But the GOP’s conservative base has in the Obama era risen up against this approach and launched a relentless campaign to turn the party’s Senate and House ranks into a uniform bloc of ideologically “pure” partisan warriors.

That campaign was wildly successful in 2010, when conservative challengers – many of whom would previously have been written off as crackpots and condemned to also-ran status – scored a series of high-profile primary season victories over Republican incumbents and Republicans with strong establishment credentials and ties. Like Lugar, most of the Republicans who went down were hardly moderates or liberals; they were standard-issue conservatives whose sins consisted of one or two wrong votes on major bills, or too much friendliness toward Obama and Democrats, or too much of an association with the party establishment. Think of Utah Sen. Bob Bennett, who was trounced at the state’s GOP convention, or South Carolina Rep. Bob Inglis, who was crushed in a primary.

It’s impossible to overstate the traumatic effect that 2010 had on the way Republican members of Congress approached their work. Many of the newly elected senators and House members were true believers, as were a fair number of Republicans already in the House and Senate. But there remained many legislators like Lugar, who had in the past been willing to occasionally break with their party and work with the other side. 2010 was a clear message to these senators and House members that they risked suffering the Bennett/Inglis fate if they didn’t change their ways.

Most got the message. A prime example is Orrin Hatch, Bennett’s Utah colleague and a man whose Senate service began the same year as Lugar’s, 1977. For the past two years, Hatch has embraced – or re-embraced – unrelenting and vitriolic partisan warfare, hurling insults at the White House and Democrats and catering to the conservative base’s siege mentality. Hatch is up this year too and was in grave danger of losing his party’s support, but his transformation appears to have saved him; he won the Utah GOP convention by 18 points a few weeks ago.

2010 clearly had some impact on Lugar. His voting in the Senate became more conservative and his posture toward Obama – whom he’d gone out of his way to praise on foreign policy in the 2008 campaign – became more hostile. But he would only go so far, and resisted the complete makeover that Hatch put himself through. Whether this was a principled stand or simply a miscalculation is a matter of opinion, but it didn’t take long for Lugar to release a statement on Tuesday night bluntly spelling out his objections to the approach to legislating that Mourdock and his wing of the party represent:

He and I share many positions, but his embrace of an unrelenting partisan mindset is irreconcilable with my philosophy of governance and my experience of what brings results for Hoosiers in the Senate. In effect, what he has promised in this campaign is reflexive votes for a rejectionist orthodoxy and rigid opposition to the actions and proposals of the other party. His answer to the inevitable roadblocks he will encounter in Congress is merely to campaign for more Republicans who embrace the same partisan outlook. He has pledged his support to groups whose prime mission is to cleanse the Republican party of those who stray from orthodoxy as they see it.

In Utah, Hatch has gone out of his way to convince Republicans that he embodies this philosophy. He still has to get through a primary next month, but assuming he does, Hatch’s survival and Lugar’s defeat will probably have the same effect on Republicans in the next Congress that the 2010 primaries had on Republicans in this one.