States want more data on abortion patients. Zealots want their hands on it. Shame is the new anti-choice strategy 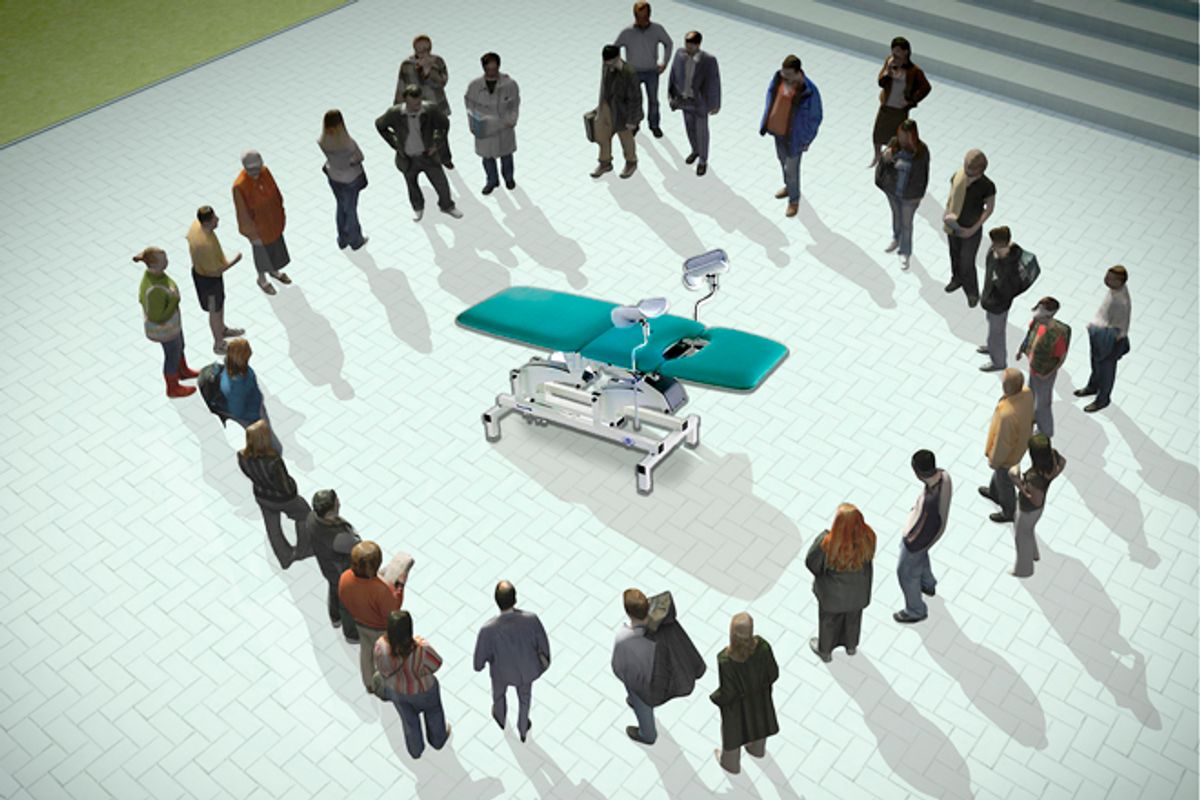 It was an “anonymous informant,” Operation Rescue claimed last week, after someone slipped them the April records of 86 women who were treated at Central Family Medical. The clinic’s lawyer was blunter. “It certainly appears to me that a crime was committed,” Cheryl Pilate told the Kansas City Star. Though the clinic (which performs abortions) had already reported a break-in to a locked dumpster, Pilate said it wouldn’t have contained patient records, which are shredded. The “informant” must have gotten the documents – containing names, addresses and details of procedures – another way.

“Our concern is for the privacy of these women and for their health and safety, for which Central Family Planning has shown very little regard,” said Operation Rescue’s Troy Newman – while posting photographs of the documents, partially redacted in black marker, online.

Antiabortion activists want to create the impression that one way or another, a woman’s decision to have an abortion will be discovered and exposed. The Central Family Medical incident is only the latest skirmish in a decades-long effort to undermine the privacy of abortion patients and harass doctors. In the early '90s, for example, at least one group of clinic protesters printed on their signs the names of women seeking abortions that day, alongside “don’t kill your baby.” Such actions, while failing to make abortion illegal, have nevertheless managed to cloak it in a stigma that belies the fact that one in three women will have an abortion before the age of 45. Now, activists are seeking new ways to shame women who seek abortions, from requiring them to hand over personal information to actually hacking into their medical records.

Kansas has been ground zero for this: Last year, the Kansas Board for Discipline of Attorneys recommended that former Attorney General Phill Kline, a hero to Operation Rescue, have his legal license suspended indefinitely for mishandling the records from murdered abortion provider George Tiller’s clinic. (The Kansas Supreme Court will make the final call.) But the zeal to keep, and sometimes steal, abortion records casts a wide net.

In Texas, the state Department of Health is trying to implement a failed legislative measure that would require abortion clinics to report far more information about their patients to the state. In Florida, voters will weigh in on a ballot measure that would exempt abortion from the privacy clause in the state constitution, with the short-term aim being to strip minors of a right to privacy that would preclude parental consent. The U.K. recently jailed a hacker who stole and intended to publish the records of 10,000 women who visited the country’s largest abortion provider.

“It promotes the idea that abortion – or your privacy, if you have any – is not safe,” says Katie Stack, a graduate student and activist who spoke out about her abortion on an MTV special, “No Easy Decision.” That put her in close contact with the “online ministry” – the name antiabortion activists have given their efforts to reach women considering abortions through the Internet.

This has been the unstated goal of many activists in the antiabortion movement -- and, sometimes, the stated one. “This might sound a little strange,” said antiabortion activist Lila Rose at the Value Voters Summit in 2009, but “if I could insist, as long as they are legal in our nation, abortions would be done in the public square, until we were so sick and tired of seeing them that we would do away with the injustice altogether … maybe then we might hear angels singing when we ponder the glory of conception.”

Rose won’t get her wish any time soon, but antiabortion activists are trying to use the Internet to have a similar effect. Rose was recently on a panel at the International Pro-Life Youth Conference about social media and pro-life activism, where topics included targeting women who are seeking information about abortion online, whether through Yahoo Answers or YouTube commenters – including figuring out where they live and recommending a crisis pregnancy center nearby.

“Privacy is very important to women who have abortions,” says Kate Cockrill, program director of the Social and Emotional Aspects of Abortion project, at the University of California, San Francisco. She points out that abortion is traditionally underreported even in confidential surveys, “which is a good indication that women don’t want to be associated with abortion experience in the eyes of someone who’s gathering data, even if it’s anonymous.”

Cockrill recently conducted a survey, as yet unpublished, that seeks to measure the impact of social stigma on women who’ve had abortions. It asked 641 women who had had abortions about 61 items, including questions about the fear people would gossip about you, judge you or hurt you, or the fear that you would lose an important relationship.

But as with other abortion restrictions, which create extra burdens in the supposed service of changing women’s minds, it’s not clear that anyone’s mind is being changed.

“Lots of women who feel a lot of stigma about abortions have abortion anyway,” Cockrill says. “If it’s not doing what antiabortion people want it to do, which is reducing the number of abortions, is it doing something on the other end, [after the fact]?”

Cockrill and her team are going to be using their scale in a study next year to look at the relationship between stigma and poor coping after abortion. Given that antiabortion activists have added to their obsessions the alleged harm abortion causes to women, there’s reason to believe that this is a self-fulfilling prophecy.

Women who have abortions, Cockrill says, “have a huge range of political views.” In fact, in her survey, only 62 percent of the women identified as pro-choice. (Seven percent identified as prolife, and 18 percent described their position as “mixed or neither.”)

“A lot of women don’t experience their abortions as a political act,” Cockrill says, partly an extension of the fact that they don’t see it as constitutive of their identity.

They may not see it as political, but that silence functions as a vicious circle that antiabortion activists happily seize upon and promote. Cockrill says, “Some people say, ‘We need to have more people come out about their abortions.’ But it’s impossible to get more women to talk about their abortions if they don’t feel supported. And it needs to be on women’s own terms.”