The CEO of JPMorgan, a strident critic of bank regulation, admits a spectacular trading loss 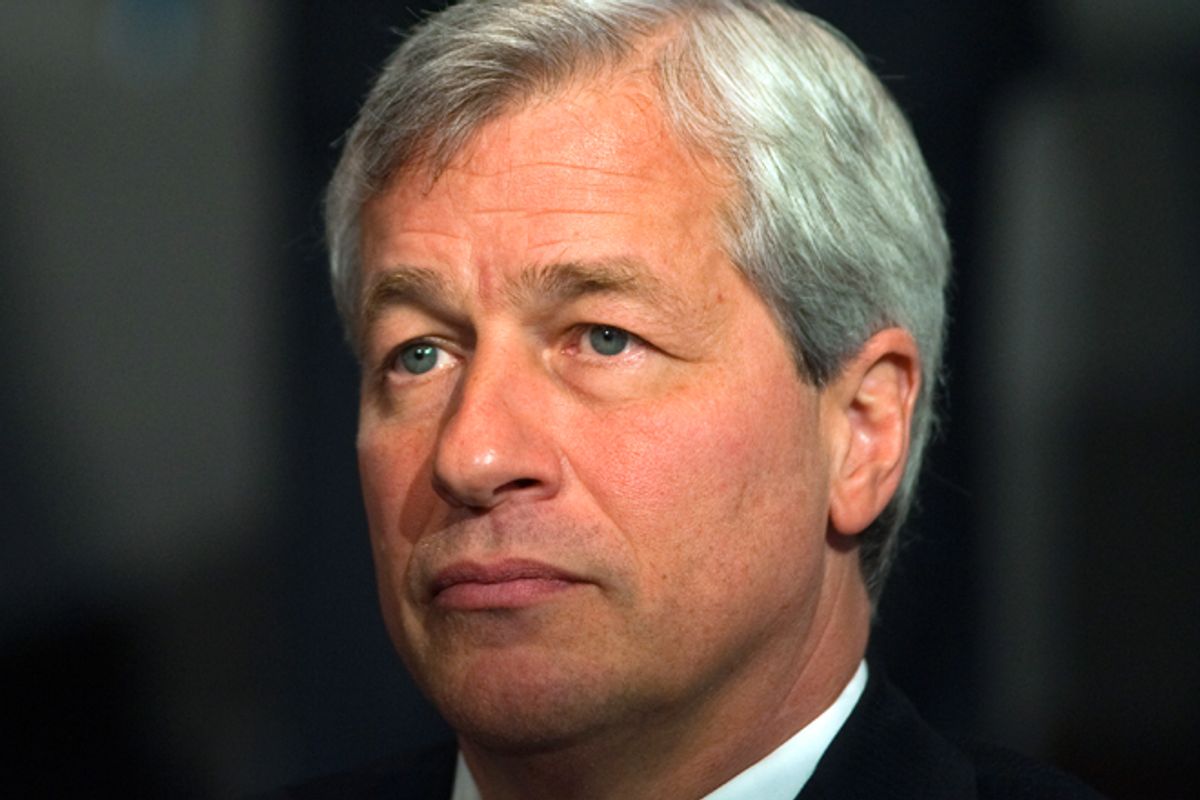 It was a quiet Thursday afternoon, and then Twitter exploded with the frenzy of a zillion financial pundits snarking all at once.

At 4:30 p.m. JPMorgan CEO Jamie Dimon convened an impromptu conference call in which he admitted that a spectacularly bad bet by a London-based trader had resulted in at least $2 billion of trading losses over the last six weeks. And the numbers could get even worse, Dimon warned, depending on how the market behaved in upcoming days. Another $1 billion in losses could happen.

A big bet gone wrong is hardly unusual on Wall Street. It's the nature of the beast, the kind of thing one expects from over-testosteroned speculators surfing the waves of their own monster egos. It happens all the time.

But not to JPMorgan. And not to Jamie Dimon. Until now JPMorgan was renowned for the excellence of its risk management strategies. It was one of the few big banks to come out of the financial crisis stronger than before the meltdown. While other banks collapsed or sought shotgun mergers, JPMorgan was the killer whale gobbling up the weakened predators around it. Dimon even complained mightily about being forced to take a government bailout. His bank didn't need it, he said, and he returned the money as fast as he possibly could.

But it was his behavior after the meltdown that has really stoked the fires of pundit schadenfreude. An early supporter of Barack Obama -- once even considered a possibility for Treasury secretary -- Dimon's feelings were hurt by the president's mild anti-Wall Street "fat cat" rhetoric. He took great exception to the notion that Wall Street needed better regulation, and he fought long and hard to gut Dodd-Frank. All the while, he could point to his own bank's relative fiscal strength as support for his superior attitude.

But not anymore. Now, one of his own employees has reminded the entire world that Wall Street needs to be protected from itself, both for its own good and for the rest of the global economy.

Finally to top it all off, there's the nature of the trade itself -- a huge bet on credit default swaps. Cue the credit crunch flashbacks! Details are sketchy, but what we know so far indicates that a London-based JPMorgan trader made a complicated bet on an index of corporate bonds that assumed that the individual corporations were likely to do well in the near future. The trader was essentially selling insurance protection on that index of bonds. If the companies did badly JPMorgan would have to pay off the buyers of that protection.

For weeks, there was scuttlebutt in the financial markets that a group of hedge fund sharks had figured out the strategy and were executing their own bets in a fashion designed to put pressure on Morgan. At the time Dimon and his chief financial officer casually dismissed the rumors. On April 13, Dimon called it "a complete tempest in the teapot." Ooops!

We don't know exactly what happened, yet, but in this case, it looks like the sharks savaged the killer whale.

So there you have it: the most arrogant of Wall Street's investment bankers, a virulent critic of the notion that Wall Street's sorry record of speculation in complex financial derivatives needed any kind of government regulation, gets brought back to earth by a taste of the meltdown's worst medicine. As Dimon, no dummy, acknowledged on the conference call: " “It’s very unfortunate ... It plays right into the hands of a bunch of pundits out there, but that’s life.”