His attacks on gay students and disabled teachers reveal a preppy, entitled cruelty. Not remembering makes it worse 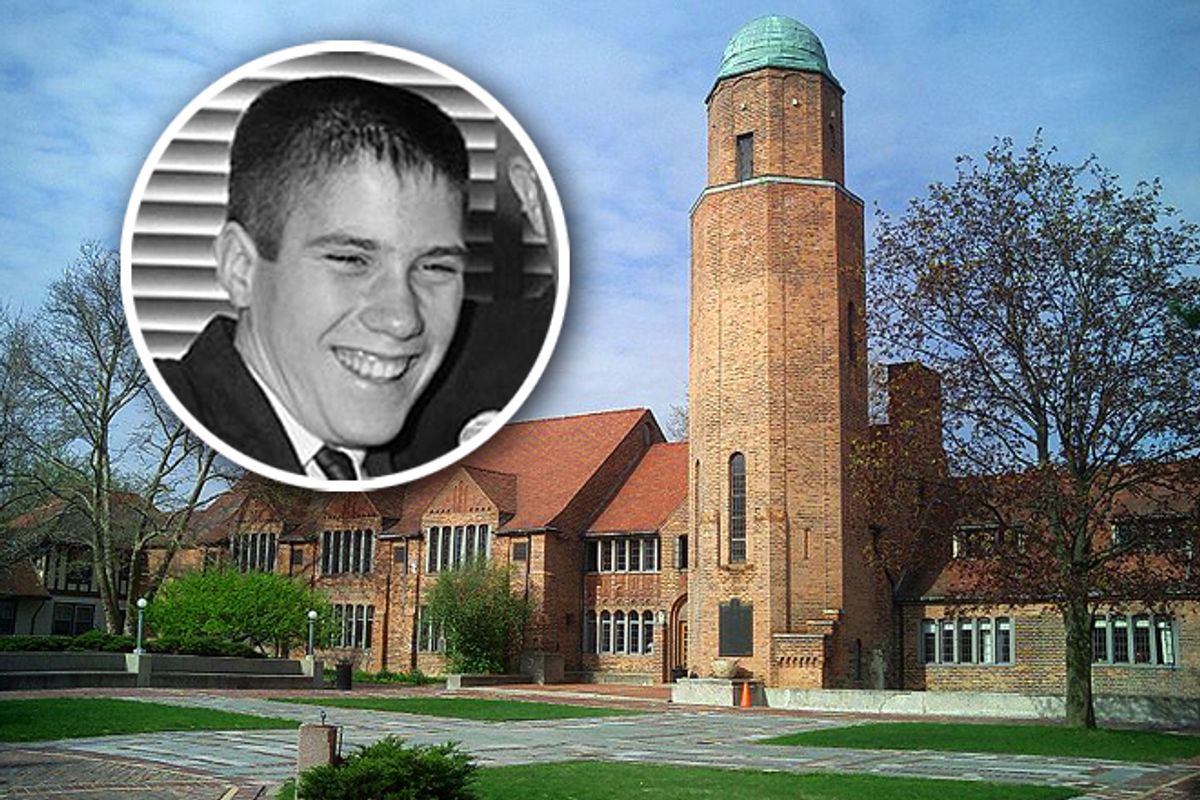 Last week we learned about President Obama's first post-college romantic relationships. This week, we're discovering details of Mitt Romney's prep-school sadism. While I think we should tread carefully when examining the youthful experiences and mistakes of both presidential candidates, I thought Obama's romantic past was fair game in Vanity Fair. I think the Washington Post's well-reported feature on Young Mr. Romney's entitled cruelty to gay classmates and a disabled teacher is even more revealing and important.

The Post has four named sources and a fifth who stayed anonymous to recount an incident in which Romney gathered a "posse" to forcibly cut the hair of a gay-seeming classmate:

Back on the handsome campus, studded with Tudor brick buildings and manicured fields, he spotted something he thought did not belong at a school where the boys wore ties and carried briefcases. John Lauber, a soft-spoken new student one year behind Romney, was perpetually teased for his nonconformity and presumed homosexuality. Now he was walking around the all-boys school with bleached-blond hair that draped over one eye, and Romney wasn’t having it.

“He can’t look like that. That’s wrong. Just look at him!” an incensed Romney told Matthew Friedemann, his close friend in the Stevens Hall dorm, according to Friedemann’s recollection. Mitt, the teenaged son of Michigan Gov. George Romney, kept complaining about Lauber’s look, Friedemann recalled.

A few days later, Friedemann entered Stevens Hall off the school’s collegiate quad to find Romney marching out of his own room ahead of a prep school posse shouting about their plan to cut Lauber’s hair. Friedemann followed them to a nearby room where they came upon Lauber, tackled him and pinned him to the ground. As Lauber, his eyes filling with tears, screamed for help, Romney repeatedly clipped his hair with a pair of scissors.

“It happened very quickly, and to this day it troubles me," Cranbrook wrestling champion John Buford told the Post. He later apologized to Lauber, who he said was “terrified,” he said. “What a senseless, stupid, idiotic thing to do.” Another classmate ran into Lauber, who later came out as gay, and apologized in the 1990s.  “It was horrible.” Lauber told him. “It’s something I have thought about a lot since then.”  The bullied classmate died in 2004, with his thinning hair still blonde. “He never stopped bleaching it," his sister told the Post.

Lauber wasn't the only gay student bullied by Romney. Gary Hummel, who was closeted, recalled that Romney mocked his efforts to speak out in class by shouting, “Atta girl!”  He pulled several pranks on a teacher with seriously compromised eyesight, once "escorting" him into a closed set of doors and "giggling hysterically" when he ran into them. Another time he propped up the back axle of the teacher's VW bug and laughed as the man hit the gas pedal "with his wheels spinning in the air." Hilarious!

In a hastily scheduled interview with a friendly Fox host, Romney made this statement: “I participated in a lot of hijinks and pranks during high school, and some might have gone too far, and for that I apologize." He sort of said he didn't remember assaulting Lauber. “I don’t remember that incident,” Romney said, laughing. (Laughing?) "I certainly don’t believe that I thought the fellow was homosexual. That was the furthest thing from our minds back in the 1960s, so that was not the case.” So he obviously remembers something – but he didn't know the guy was gay! About taunting Gary Hummel with "Atta girl," Romney offers a similar qualified denial: “I really can’t remember that. As this person indicated, he was closeted. I had no idea that he was gay and can’t speak to that even today." So I didn't do it, and anyway, the guy was closeted. Romney closed with the classic non-apology apology:  "If there’s anything I said that is offensive to someone, I certainly am sorry for that, very deeply sorry for that."

I'm not sure what's worse – that he remembers his cruel pranks, and he's lying about it, or that such cruelty doesn't stand out in his memory. It's all of a piece with Romney's cavalier statements about power and entitlement: "I like being able to fire people who provide services to me;" joking to a group of unemployed voters that he's "unemployed" too; the $10,000 bet with Rick Perry; his statement the other day that retirees "can't begin to live off the puny interest from their CDs." He's still the same entitled rich kid, the one whose classmate told the Post he thought deserved some punishment in the Lauber incident --  punishment that of course never came. No wonder the story of poor Seamus on the roof of the car never goes away: we have stories of Mechanical Mitt, and Mean Mitt, and very few of Mitt as a man who shows genuine empathy to people (or other living beings) less powerful than he is.

Update: This is rich: Some of Romney's school-days friends are being asked by the campaign to step forward and defend him from the Washington Post story charges - and they're balking. Stu White told ABC News that he is “still debating” whether he will help, addding, “It’s been a long time since we’ve been pals.”

Another classmate and old friend of Romney’s told ABC “a lot of guys” who went to Cranbrook have “really negative memories” of Romney’s behavior there. He described it as “evil” and “like Lord of the Flies." The classmate, who wouldn't be named, says Romney is lying when he says he can't remember the hair-cutting incident.

“It makes these fellows [who have owned up to it] very remorseful.  For [Romney] not to remember it? It doesn’t ring true.  How could the fellow with the scissors forget it?” the former classmate said.

And another classmate, Phillip Maxwell, who witnessed the hair-cutting incident, told CBS today: "Mitt was a prankster, there's no doubt about it. This thing with Lauber wasn't a prank. This was, well, as a lawyer, it was an assault. It was an assault and a battery. And I'm sure that John Lauber carried it with him for the rest of his life."

It seems like Romney's glib dismissal of the story is bothering his old friends. Stay tuned; Romney's going to have to say  more about this soon. A lawyer just termed it "assault."