The president has "evolved" past religious conservative figures, like Rick Warren, to whom he used to pander 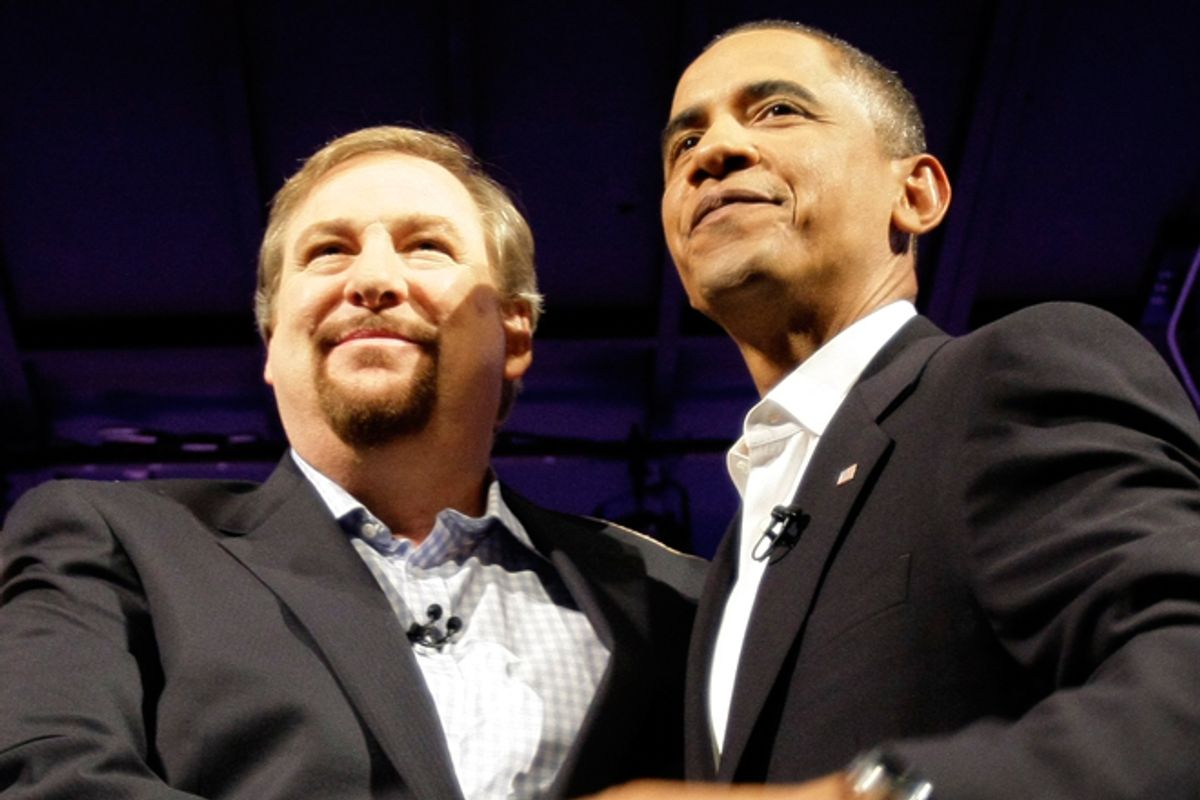 “God is the author of marriage,” came the declaration of National Organization for Marriage president Brian Brown moments after President Obama’s historic ABC News interview aired this afternoon. It cannot be redefined, Brown charged, “according to presidential whim.”

Indeed not, but while Obama’s expressed support for marriage equality changes nothing legally, his words — and particularly those about how his faith informed his views — signal a new direction away from kowtowing to a religiously narrow concept of marriage. In previous statements Obama had parroted the conservative line about “one man and one woman” and just two years ago paid homage to “traditional marriage.” Today Obama explicitly rejected the idea that religious conservatives have a monopoly, either legally or rhetorically, on defining marriage as a straights-only institution.

As the Rev. Welton Gaddy, president of the Interfaith Alliance pointed out, “it is the Constitution, not his religion that should form the basis of his position.” Yet while Obama certainly shouldn’t say that his religious views dictate policy or legislation, his discussion of how his faith informed his own thinking may signal a political turning point. By rejecting the idea that “true” Christianity demands fealty to “one man and one woman,” Obama appeared less invested in pandering to religious conservatives like Rick Warren, Jim Wallis or Joel Hunter, Obama’s spiritual advisor, who say they’re concerned about issues beyond the culture war but nonetheless remain opposed to marriage equality.

Somehow, though, Obama will have to square this newfound position with his allegiance to anti-equality religious figures. The director of the Democratic National Committee’s faith outreach, the Rev. Derrick Harkins, for example, is opposed to same-sex marriage. While he’s not “a bomb-thrower in terms of saying things that will get a rise out of a crowd,” he told me last year, he is still opposed to same-sex marriage, calling it a “vexing” theological issue. Now the president is for it, but the director of the party’s faith outreach is not.

Republicans, though, are gloating, because they think Obama’s change of heart will energize voters to pull the lever for the flip-flopping Mitt Romney. Ralph Reed, chairman of the Faith and Freedom Coalition, whose chief talking point following the 2010 midterms was that evangelical turnout decides elections, threatened that Obama’s turnabout “is certain to fuel a record turnout of voters of faith to the polls this November.” Romney, said Family Research Council president Tony Perkins in a statement, “may have been handed the key to social conservative support by President Obama.” And Mike Huckabee, whose name was floated earlier in the day by National Review as a possible Romney running mate to energize the social conservative base, maintained that marriage “is going to be a defining issue this election.”

There are already signs that conservatives are going to taunt Obama with predictions of losing black voters. In his statement, Perkins took pains to point out that majority-black counties in North Carolina voted in favor of Amendment 1, the constitutional amendment that will ban not just same-sex marriage, but civil unions and domestic partnerships as well. (Obama opposed the amendment, although his decision not to campaign in North Carolina in the days before the vote was seen as skittishness over alienating voters in a traditionally Republican state that gave him its electoral votes in 2008.)

Perhaps any black and Latino voters who might be moved to vote against Obama over this single issue should take a look at NOM’s own strategy document, in which the organization admits it aims to “drive a wedge between gays and blacks — two key Democratic constituencies.” Targeting Latinos, NOM wants to “interrupt this process of assimilation by making support for marriage a key badge of Latino identity — a symbol of resistance to inappropriate assimilation.” And it wants to portray Obama as a “social radical” unfit for the presidency.

Picking up on that last theme, Rick Santorum accused Obama of “radical social engineering” and blamed “cultural elites” for undermining “the institution that gives the best opportunity for healthy, happy children and a just and prosperous society.”

But public opinion is not on NOM’s side, except for the base it already attracts. While a vast majority (77-21 percent) of white evangelicals remain steadfastly opposed to marriage equality and a smaller segment of minority Christians (50-43 percent) oppose it, other groups — Catholics, mainline Protestants, Jews and the unaffiliated — support it, according to recent data from the Public Religion Research Institute. And a recent polling analysis by the Pew Research Center for the People and the Press found that “since 2008, the proportion of African Americans favoring gay marriage has increased from 26 percent to 39 percent, while opposition has fallen from 63 percent to 49 percent.” Another PRRI analysis found that “younger black Millennials (age 18-24) and younger black Protestant Millennials demonstrate more support for same-sex marriage than black Americans overall.” The younger someone is, the more likely he or she is to support same-sex marriage, although young white evangelicals remain the most resistant.

Before Obama’s announcement, the Romney campaign had been reaching out to the Rev. Samuel Rodriguez, an outspoken opponent of marriage equality and president of the National Hispanic Christian Leadership Conference, which claims to represent 16 million Latino evangelicals. There’s a conventional wisdom that these voters matter a lot in swing states like Florida, or Colorado. But polling data on the religious breakdown of Latinos is hard to come by; a spokesperson for the Pew Hispanic Center told me the organization “does not have any data on the religious composition of Hispanics by state.” Rodriguez’s actual sway over or representation of voters has never been measured.

To be sure, the religious right is going to make as much hay over this as it can, through fundraising, campaigning, moralizing and browbeating. But in the end, it will probably turn out to be a definitive case of preaching to the choir.