Obama's next moves on marriage 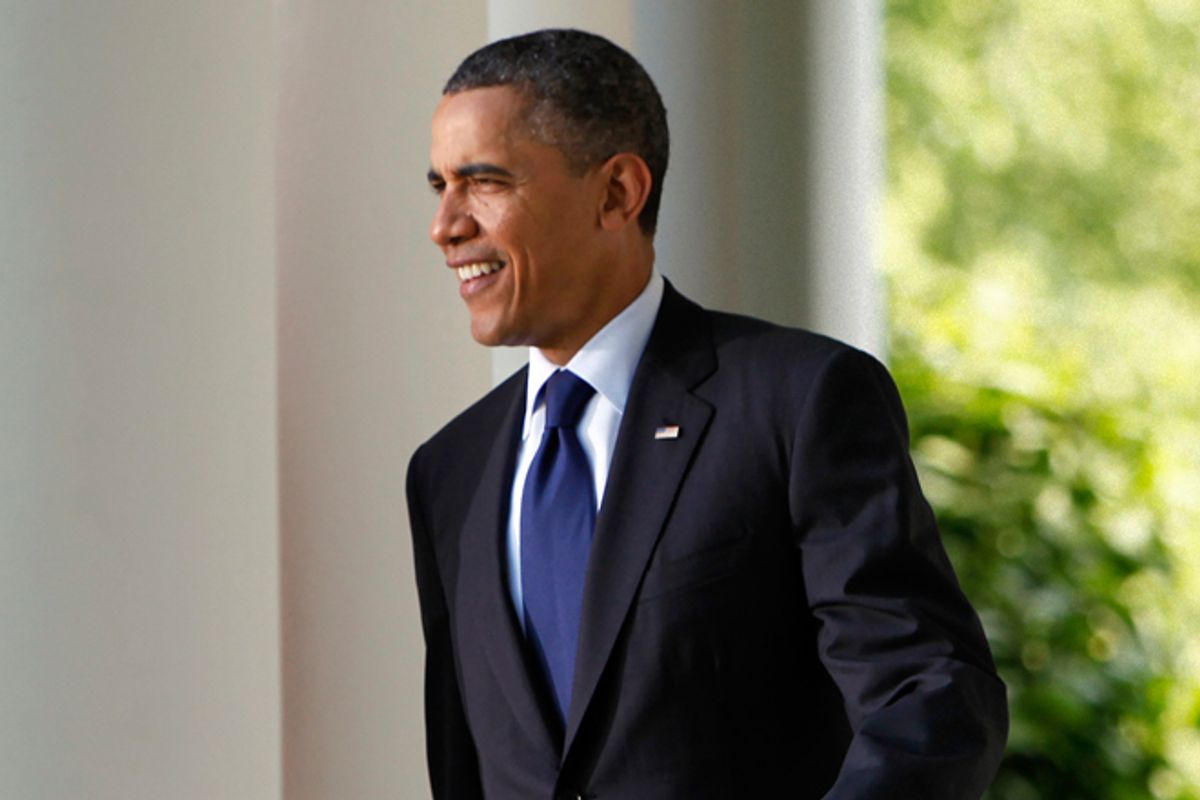 President Obama's support for same-sex marriage is a huge victory for the gay rights movement, but it's also a qualified one. Obama said he still supports the right of states to deny couples same-sex marriage rights, but "personally," he thinks that's wrong. In addition to making Obama's stance on gay rights a bit less incoherent — how much sense did it make for him to oppose both gay-marriage and the gay-marriage ban in North Carolina, which passed on Tuesday? — the president's much-anticipated "evolution" opens the door for him to be a more fierce advocate for gay rights.

I don't mean to downplay the importance of having the president support marriage equality. It's a decisive blow in the culture war. For years, the National Organization for Marriage, which opposes same-sex marriage, has been able to deflect criticism by pointing out that Obama shared its views.

"Four years ago in California, Prop. 8 supporters had a flyer that they passed out saying Obama opposed same-sex marriage," says John Lewis, legal director for Equality USA, a gay-rights group. "They used his equivocation quite effectively against us. They can’t do that anymore."

But there are key ways in which Obama can pay this forward. A few weeks ago, the president angered many in the gay-rights community by refusing to sign an executive order banning government contractors from discriminating against gay people. In most of the country, your employer can still fire you because of your sexual orientation. The Defense of Marriage Act (DOMA) continues to prevent the federal government from recognizing same-sex marriages performed in the states, which among other things means same-sex partners who aren't U.S. citizens face deportation. The president's announcement yesterday, while a step forward, is hardly the end of the road.

Most immediately, say gay-rights advocates, the president should use his platform to oppose proposed bans on same-sex marriage in Minnesota, Maryland and Washington state, as well as support a ballot initiative in Maine that would grant same-sex couples marriage rights (last year, the state's gay-marriage law was overridden by a referendum).

"I hope he speaks out on the ballot measures," says Marc Solomon, national campaign director for Freedom to Marry. "We want the president to speak out forcefully on each of [these pieces of legislation], and I think he will."

The president can also champion other important pieces of legislation, among them the Employment Non-Discrimination Act, which would make discrimination against gay people in employment and housing illegal, and the DOMA repeal currently struggling in the House of Representatives.

Many people also don't realize that, while "don't ask, don't tell" put an end to the systematic removal of gay people from the military, it doesn't abolish discrimination entirely. Because there are no affirmative protections in place (as there are for women and minorities in the military), gay service members can still be passed up for promotions or, hypothetically, get kicked out of the military for being gay. The difference is that now, it's not an official policy.

"The repeal of 'don't ask, don't tell' did not affirmatively put into law protections against discrimination," Lewis says.

Perhaps the most significant way the Obama administration can make things better for gay people is to stop enforcing DOMA. It has plenty of cover to do so. Last year, the Department of Justice said it would no longer defend the law against the numerous challenges it faced in court, which has already been ruled as unconstitutional by two separate federal courts. It can take a similar position when it comes to putting it in place. Earlier this year, and after a lot of legal wrangling, the administration finally allowed Karen Golinsky, a federal lawyer, to add her wife to her Blue Cross/Blue Shield health plan. But the decision was a one-off, and doesn't allow other federal employees the same benefits. While the Obama administration would need legislative approval for other things — like recognizing same-sex couples for tax purposes — extending health benefits to all federal workers is one concrete way it can show its support for gay people.

This election, social issues will take a backseat to concerns over the economy, which might be a good thing for gay-rights supporters. It allows the president to make to make inroads on gay rights without the maelstrom of controversy that might erupt were conservatives not busy trying to put us back on the gold standard or firing federal workers. In other words, Obama has plenty of room left to evolve.