On the rack: A cultural history of breasts

Did breasts evolve for lactation or to enhance sex appeal? A new book explores why they matter 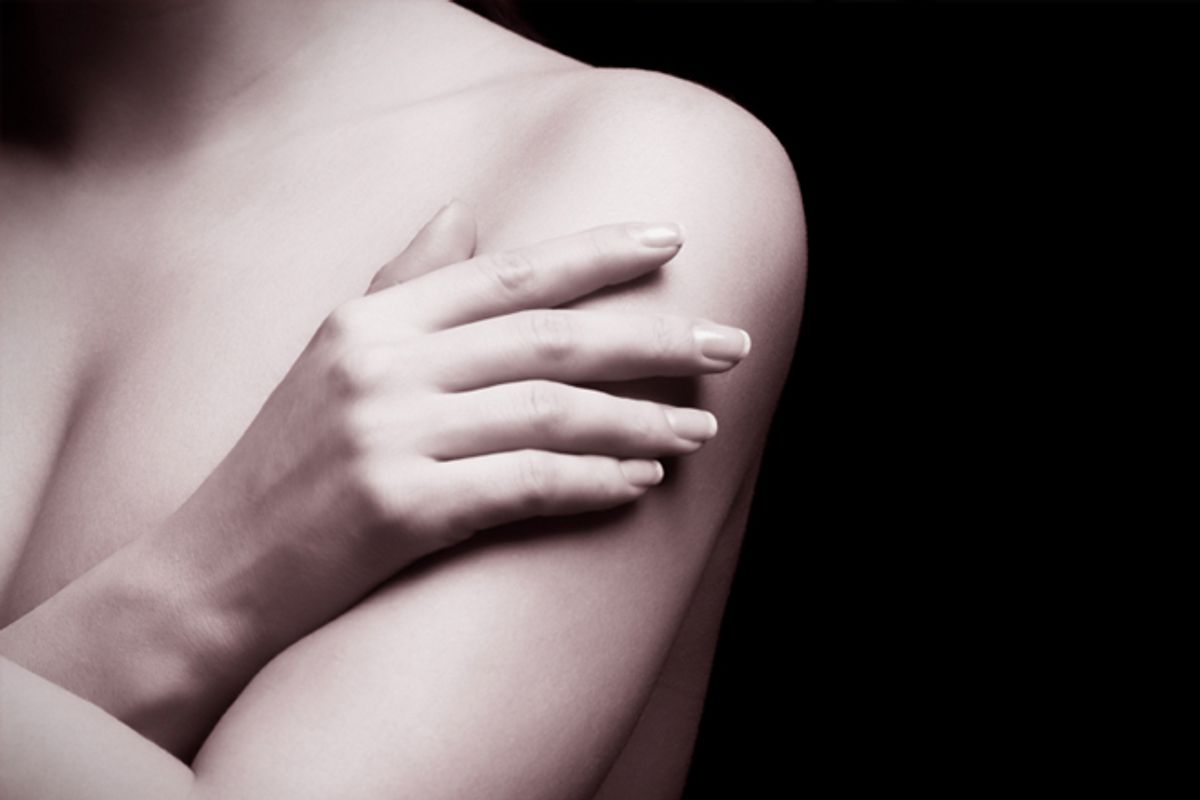 It's hard to be boobs. Sure, breasts are cherished as givers of milk and the pinnacle of sex appeal, but the modern world hasn't been good to mammaries.

As Florence Williams writes in "Breasts: A Natural and Unnatural History," they're the most tumor-prone organ in the human body. They "soak up pollution like a pair of soft sponges," and transmit environmental toxins to babies through breast milk. "Breasts are bellwethers for the changing health of people," she says. While we've "genetically modified our crops to be able to protect them from the ill effects of pesticides," Williams writes, "we haven't yet figured out how to modify our breasts." Aside from using saline and silicone, of course.

Speaking of, breast implants are more popular than ever: It's the most common form of plastic surgery, above even nose jobs and liposuction. Even cosmetic enhancement notwithstanding, breasts are bigger than ever, and girls are getting them at increasingly younger ages. These recent dramatic changes are the heft of Williams' book, although she also covers evolutionary basics, like why we have them, what they're made of and how they work. It's an interesting and engaging read peppered with factoids the kid from "Jerry Maguire" would no doubt appreciate (e.g., "the average breast weighs just over a pound"). Occasionally, it veers into technical territory that will put some readers to sleep, but overall it's a much-needed look at why breasts matter more than we realize, even in our boob-obsessed society.

I spoke with Williams by phone about the myth of the perfect pair, growing bra sizes and toxic breast milk.

One of the trickiest questions posed by the book is the simple one of why breasts exist. After all of your research, where do you stand on that question?

It’s a pretty contentious debate and surprisingly so. I think both sides have some biases and also some logic behind them, but where I see it coming down is between natural selection -- like, “Are these breasts for women and their babies?” -- or sexual selection, as in, “Are they signals for men?” Ultimately, I really fall down on “Let’s look at how breasts work and what they’re made out of.”

So, for me, it made sense that these are naturally selected organs, which is true for mammary glands in every other mammal that we know of. There are no other mammals in which breasts are sexually selected. It just makes sense that in our deep evolutionary past we really needed those extra few percentages of fat, and breasts gave us a place to put that, and really helped gestate and lactate the human infant, which has these unique fat requirements. The mammary gland in the breast in humans is filled with estrogen receptors and those actually make fat. There's this relationship between fat and estrogen, and where there’s estrogen, that’s going to tell cells to start storing fat, and as there’s more fat, that’s going to help make more estrogen.

So it’s possible that breasts are the result of natural selection but they also play their part in sexual selection?

Yeah, absolutely. There’s no doubt at all that a lot of men are really, really attracted to breasts! But it could be that that attraction came later or was secondary, and it’s never really been satisfactorily proven that all men in all cultures across all times are obsessed with breasts.

It hasn’t been proven. In fact we have such strong cultural biases about breasts that it’s easy to see how some of these anthropologists may just be projecting their own beliefs back into evolutionary times, and that’s just a classic no-no. We don’t really have fossil evidence of when breasts evolved because you can’t dig up a fossil of an early human and know what her cup size was.

So, there’s no “perfect” breast in terms of male sexual preference?

Well, certainly Hollywood and plastic surgeons would like us to believe that there’s a universally preferred large breast, but the evidence just doesn’t really bear that out. There are a lot of men out there who like small- or medium-size breasts, and there are some men out there who don’t seem particularly interested in breasts. In fact, breasts are so varied in humans that if there really was this evolutionary or even sexually selected preference for large breasts, you’d think we’d see a lot more of them. Women with small breasts are just as capable of nursing infants and that’s why those traits persisted.

Speaking of plastic surgeons: You actually had one evaluate your own breasts for the book. What was that like?

It was really bizarre and funny. I always thought my breasts were sort of perfectly fine. I kind of went in there thinking, “Oh, he’s gonna tell me that, ‘Congratulations, your breasts are fine,’ because he’s this great judge of breasts and presumably he’s seen all these incredible deformities.” I walk in there and take off my robe and he squeezes me and squishes me and pulls out a measuring tape and gives his final pronouncement, “Well, let me just say you would be a perfect candidate for augmentation.” I had to just crack up. So much of that industry is about the soft sell -- they’re just so good at making women think that they’re not good enough the way they are.

The first silicon breast implant was performed in 1962, so 50 years ago. It was up and running pretty quickly after that. It was particularly popular among women who made their living onstage -- the go-go dancers and the burlesque dancers and the topless dancers and then Hollywood. Eventually it leaked into the broader culture, and certainly by the '70s and '80s women were going for this. Then there was the implant scare of the '90s, in which a lot of women had problems with their implants, and the FDA actually banned them for 14 years. But now they’re back; they’ve never really been proven to be linked to disease or cancer. In fact, more women are getting implants now than ever before -- over 300,000 a year.

And breasts are getting bigger in general, not simply because of plastic surgery. What’s going on there?

There also may be other factors at play that have to do with hormones in food and birth control pills and in hormone replacement therapy, and of course we have all these estrogenic chemicals in our environment. All of those things appear to be interacting with our breasts on some level.

Somewhat related, why are girls experiencing puberty and getting breasts earlier and earlier?

I would say similar reasons. We don’t know for sure, but it appears that diet is the major factor there. Girls are sort of undergoing what’s sometimes called over-nutrition. A third of kids now are overweight or obese. You’re also seeing skinny girls getting breasts earlier, so the obesity theory does not seem to fully explain the phenomenon. There are researchers out there that have tried to examine the role of chemicals and pharmaceuticals, but the jury is still out.

Turning to the function of breasts for feeding infants, one of the purposes of breasts that’s not actually up for debate: How and why did lactation evolve?

Lactation evolved 200 million years ago, even before there were mammals as such. It evolved in the precursor to mammals, probably not as a food but as an anti-infection substance. It helped fight pathogens and helped the immune system, and many of those qualities have been conserved. Breast milk today is not just filled with nutritional substances but it’s filled with these immune system-boosting substances that scientists are just beginning to understand. There are proteins and enzymes and complex sugars that are really quite amazing at inhibiting parasites and killing E.coli on contact. It also seems to be filled with bacteria too, and so it may be inoculating the infant’s immune system or educating it as to which bacteria are good and which are bad.

It’s an amazing, complex, highly evolved substance. It’s the only food on the planet that’s really meant to be eaten by humans.

It seems that nearly everything breast-related is controversial and lactation is no exception. What’s your position on the breast-is-best debate?

Really, throughout human history there have been women who just didn’t want to breast-feed, and I totally get it. Breast-feeding can be really hard. One of the earliest professions was not prostitution but actually being a wet nurse.

Certainly in Western societies it’s really safe to be raised on formula. Where you see the more dramatic benefits from breast milk are with preemies; they do much, much better. When you go to developing countries where the water isn’t safe, formula isn’t a great option, and you can really use these extra immune-boosting benefits because of these pathogen rich environments. It makes sense from a public health standpoint to really advocate breast milk in developing countries. In our country, what would be great is to really support women who want to breast-feed through better workplace policies.

We see negative entities in breast milk as well. The weight of the book is devoted to ways that our breasts are, as you write, “the catchment for our environmental trespasses.” Why are we seeing toxins show up in breasts and breast milk, of all places?

A lot of these substances, if they exist in the breast they also exist in the blood and in a lot of cells in our body. But many of them are attracted to fat and our breasts are among the fattiest organs we have next to our brains. So breasts are these soft sponges and they soak up a lot of things in our environment. They’re incredibly good at converting these substances into breast milk. It’s a little creepy.

What about the transmission to nursing babies?

It appears that the benefits of breast milk still by far outweigh the risks, and even though we have these unnatural substances in our breast milk it still exists for the most part in small quantities. Nonetheless, we don’t really understand what the health effects of this are. It seems wise to look harder at these chemicals. If they’re not proven safe, maybe we should try to use something else. It would be great to provide greater incentives for manufacturers to put safer chemicals on the marketplace.

I’m so curious what you think of sexualized attempts at raising awareness about breast cancer -- ads like the "Save the Boobs" PSA, which pictured a pair of bouncing bikini-clad breasts, and the explosion of "I (heart) boobies" bracelets.

I guess the sexualization of breasts is a reality and we’re not going to change that any time soon. I did like that those ads tried to reach a younger audience, so there you have it. Breasts are filled with contradictions and conflicting messages, but the more we can understand their complexity and appreciate that complexity, the healthier we’ll be down the road.