New stats about the NYPD's racist tactics show why some Occupiers chant "F*** the police." 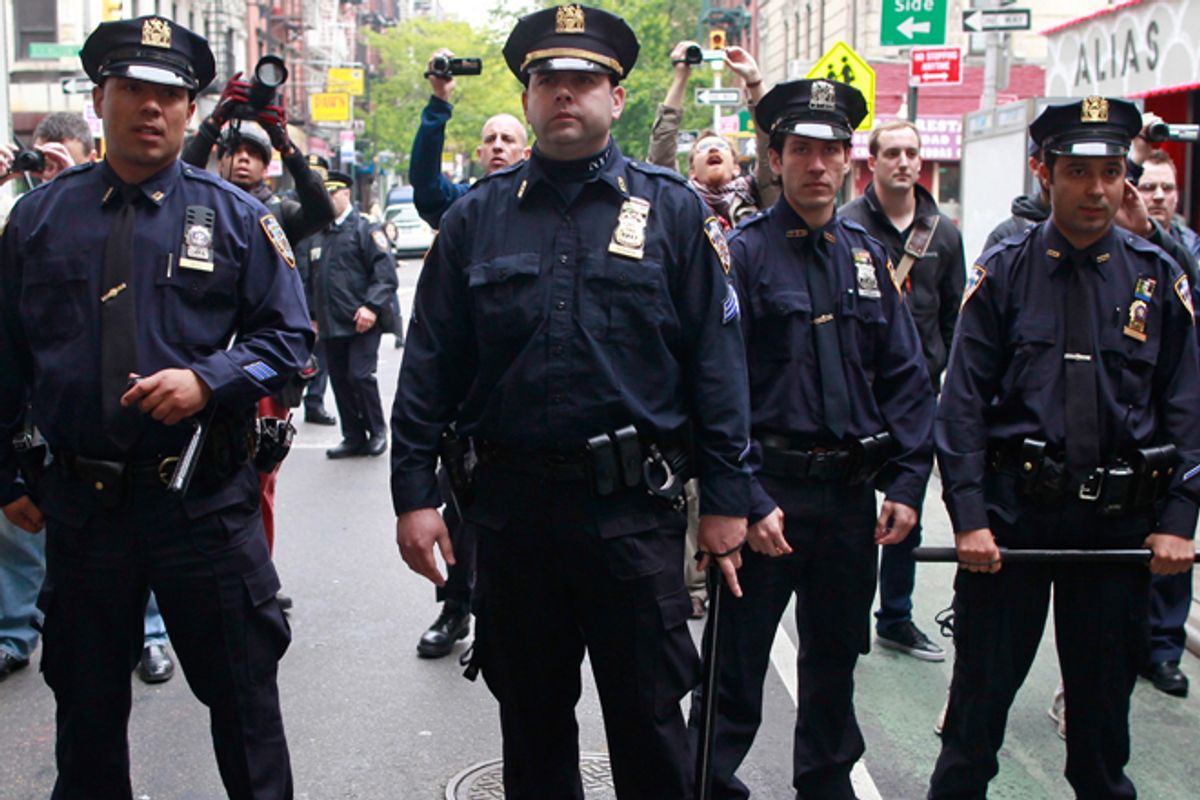 Attitudes toward the police are the source of innumerable disagreements and divisions between those who've participated in Occupy-related actions in the past half year. From Oakland, Calif., to New York "Fuck the Police" marches regularly snake through the streets, while in early encampments chants of "We are the 99%, and so are you!" would ring out invitingly to surrounding police officers. (Unsurprisingly, anti-police sentiment increasingly outweighed support for police as more and more Occupy participants felt the jab of billy clubs and the sting of tear gas.)

It's beyond the purview of these paragraphs to explain the many reasons someone might take to the streets and shout "fuck the police!" However, as a new report from the New York Civil Liberties Union confirms, the consistently racist practices of the NYPD should make fierce anti-police sentiments understandable, even for those who find such an attitude unpalatable.

Using the NYPD's own statistics, the NYCLU report highlights what they describe as a "two-tiered" policing system, in which black and Latino New Yorkers receive very different treatment from whites. Perhaps the most shocking finding of all: There were more stops of African-American young men in 2011 than there are African-American men living in the city -- and nine out of 10 of those stopped had committed no crime.

In nearly half of New York's 76 police precincts, black and Latino New Yorkers accounted for more than 90 percent of those stopped; in almost all precincts black and Latinos accounted for more than half of stops. Furthermore, frisks, which are only supposed to take place if police suspect someone is carrying a weapon, occurred far more often if the person stopped was black or Latino, even though white people were found more often to be carrying weapons. The report also notes that despite the 600 percent increase in stop-and-frisks under Mayor Bloomberg, the number of guns recovered has not increased proportionately.

"This cannot stand. Real people's lives are in the balance. Whole generations of boys and girls are growing up afraid of the very people that are supposed to be keeping them safe," Donna Lieberman, executive director of the NYCLU, told press on Wednesday.

Is it a surprise, then, that in a march of 5,000 predominantly non-white New Yorkers organized to call for justice for the murdered Trayvon Martin, with Occupy support, that chants moved smoothly from "We are Trayvon Martin!" to "Fuck the Police!"? The greater surprise should perhaps be why more people don't feel angry at the NYPD. Of course, many will continue to disagree with anti-police marches. However, when statistics on policing show what the NYCLU's Lieberman called "a tale of two cities," disagreements should only arise over tactics to redress this system; it seems there's an overwhelming case for fury at the police.

In a statement, NYPD spokesman Paul Browne defended police practices, saying that "stops save lives" and that New York has this year seen a record low for murders. He said that it is "the safest big city in America," which prompts the question: safe for whom? When vast swaths of New York's population live in constant fear of being harassed by a well-armed, uniformed gang -- and that this fear is largely contingent on a person's skin color -- this strikes me as the sort of safety I have no interest in maintaining.