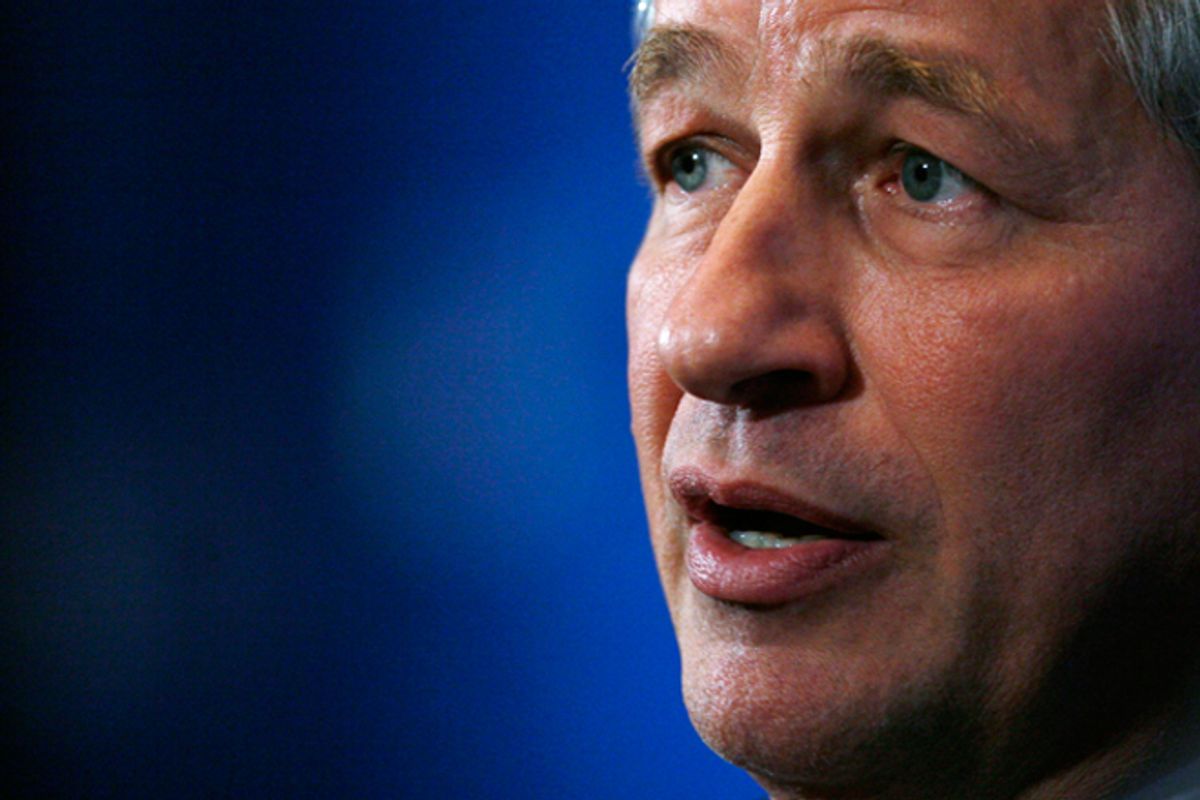 If you're looking for the most easy-to-understand breakdown of how JPMorgan managed to lose $2 billion, read Marketplace reporter Heidi Moore's fabulous explainer. Readers who fancy themselves financially sophisticated can ponder DealBreaker's Matt Levine's analysis. If all you want is a guide to the critics "flaying" Dimon's hide, check out the New York Times' DealBook.

But for our purposes right now, all you need to concern yourselves with is Dimon's monumentally disingenuous self-castigation. Because Dimon is not stupid. Under his tenure, JPMorgan has been the best-run of the big banks. So Dimon's self-criticism gets it all backward. The fact that JPMorgan was so very stupid is so very scary because we can rest assured that just about everybody else is doing things even more idiotic.

The whole point of the infamous "Volcker Rule" included in the Dodd-Frank bank reform act is to restrict the banking sector's ability to clobber the economy by doing dumb things. As the Huffington Post's Mark Gongloff noted, if  a strict version of the Volcker rule had been in place, JPMorgan, quite possibly, would have been prevented from making a bet that would lose the bank $2 billion -- or more.

However, the Volcker Rule is not yet in effect. The final details are still being hammered out, and the brutal truth is that financial sector lobbyists have almost undoubtedly ensured that the kind of "hedging" bet JPMorgan just made would be technically legal under the new rules. There's a remote possibility that the blowback from Morgan's disaster might strengthen the final version of the rule, but don't hold your breath. The worst financial crisis in 80 years resulted in bank reform that at best can be categorized as tepid and perhaps fatally compromised. One bad stumble by JPMorgan that, lucky for us, doesn't seem likely to ignite a system-wide crash isn't going to make a dent in Washington regulatory policy.

On the other hand, there could well be real political repercussions. Because if anyone is going to come out of this mess looking even stupider than Jamie Dimon, it's got to be Mitt Romney -- the presidential candidate actively campaigning on a pledge to repeal Dodd-Frank.

Barack Obama has been rightly dinged from the left for his soft approach to Wall Street, but there's a reason why Big Capital is shunning him and pouring money into Romney's campaign. Romney's answer to the financial meltdown is to do absolutely nothing; to abandon even any pretense of reining in Wall Street bad behavior, to return us to the pre-crash regulatory status quo.

I can't say with certainty that Dodd-Frank will do a good job of protecting us from a replay of the great financial crash of 2008. But the prospect of electing someone as president who is promising Wall Street that he will let them blithely self-regulate? That seems even stupider than JPMorgan's $2 billion bad bet.