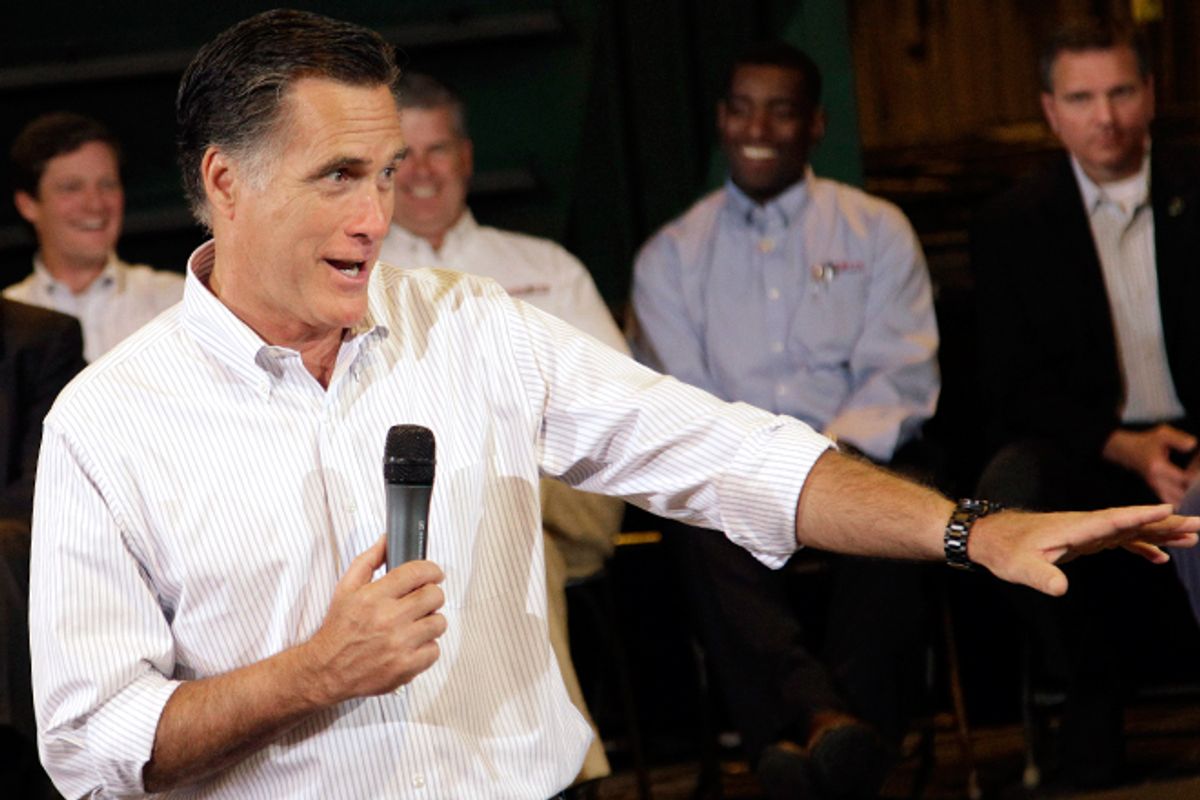 It's not precisely the same as Gary Hart daring reporters to follow him, when faced with Donna Rice rumors back in 1988, and then getting caught in an affair. But when Ann Romney pointed to her husband's fun-and-games prankster high school days to show us "the real Mitt," she made those years even more interesting and relevant to political reporters, and potentially to voters. "I still look at him as the boy that I met in high school when he was playing all the jokes and really just being crazy, pretty crazy," she told the CBS "Early Show" 10 days ago. "There's a wild and crazy man in there."

The right wing is now trying to accuse Washington Post reporter Jason Horowitz of an oppo-research operation, but his meticulously reported and well-sourced story of Romney's prep-school bullying, including two cases involving gay classmates, won't be destroyed by the noise machine.

What's giving the story legs isn't merely the homophobic hair-cutting episode, which a lawyer friend of Romney's termed "assault and battery," not "hijinks." It's Romney's callous reaction. His campaign first tried to shrug off the story with an insincere non-apology, but when the details of Horowitz's tale got people's attention – the "terrified" classmate John Lauber "with tears in his eyes" as Romney chopped off his hair with a scissor; the callow preppie leading a sight-impaired teacher into a set of closed doors – the candidate made his own statement. And what a statement it was.

You know, I don't, I don't remember that incident. I'll tell you, I certainly don't believe that I or – I can't speak for others – thought the fellow was homosexual. That was the furthest thing from our minds in the 1960s.

You really have to listen to it to hear that the callow preppie hasn't changed much in 50 years. As I noted yesterday, it's rather brazen to say he doesn't "remember that incident," but to immediately volunteer that he didn't think "the fellow was homosexual." How could Lauber's being gay have anything to do with an incident he says he doesn't remember?

The other way his answer hurts him is that it seems to have riled up the friends who told Horowitz the story. After 50 years, they all confessed that the incident made them feel guilty, but Romney says he doesn't remember it?

The pro-Obama PAC American Bridge is using the incident in a campaign video it called "Mitt Gets Worse," a play on the moving series of famous folks reassuring gay teens "It Gets Better." I don't think we should judge Romney's actions of 50 years ago with the exact same values society has evolved to hold today. But I do think we should judge his reaction to the story with those values. At a time when we know bullying of any kind, but particularly homophobic bullying, can leave lasting scars and even lead to suicide, Romney's non-apology shows he has an empathy problem, plain and simple.

I'll be debating the issue on "Hardball" with former RNC chairman Michael Steele. In the meantime, here's the "Mitt Gets Worse" video.