Gritty Rust Belt cities, once left for dead, are on the rise -- thanks to young people priced out of cooler locales 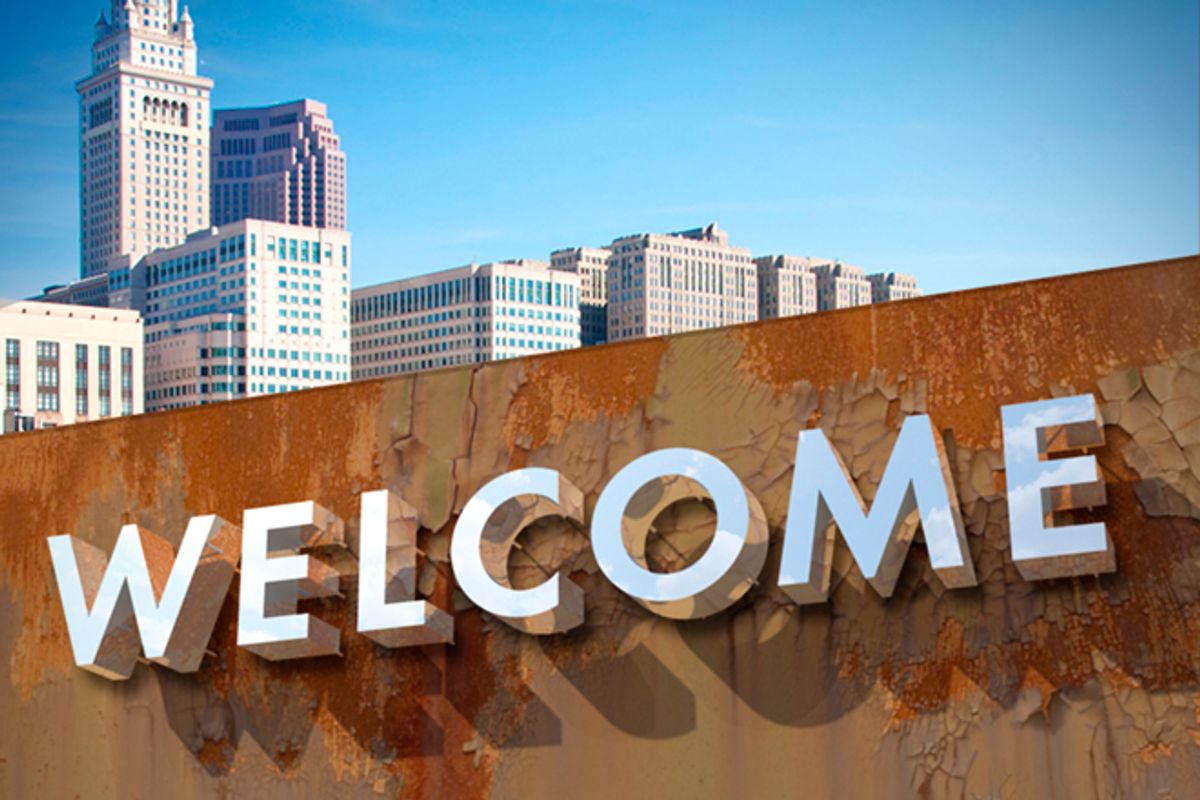 More than any other city in America, Cleveland is a joke, a whipping boy of Johnny Carson monologues and Hollywood's official set for films about comic mediocrity.

But here's what else is funny: According to a recent analysis, the population of downtown Cleveland is surging, doubling in the past 20 years. What's more, the majority of the growth occurred in the 22-to-34-year-old demo, those coveted "knowledge economy" workers for whom every city is competing. Pittsburgh, too, has unexpectedly reversed its out-migration of young people. The number of 18-to-24-year-olds was declining there until 2000, but has since climbed by 16 percent. St. Louis attracted more young people than it lost in each of the past three years. And as a mountain of "Viva Detroit!" news stories have made clear, Motor City is now the official cool-kids destination, adding thousands of young artists, entrepreneurs and urban farmers even as its general population evaporates.

It's a surprising demographic shift that has some in the Rust Belt wondering if these cities should trumpet their gritty, hardscrabble personas, rather than try to pretend that they're just like Chicago or Brooklyn, N.Y., but cheaper. Detroit has certainly proven that a city's hard knocks can be marketed, from "ruin porn" coffee table books to award-winning Chrysler ads to "Detroit Hustles Harder" hoodies. Could other Midwestern cities go all-in on their own up-by-your-bootstraps appeal? "I think there's a backlash in the American psyche that's longing for that," says Cleveland native Richey Piiparinen. "Look at Miami. We've learned that all that glitters isn't gold."

Piiparinen recently referenced this trend as "Rust Belt chic" in a post on the blog Rust Wire, describing its allure as "the warmth of the faded, and the edge in old iron and steel ... part old-world, working culture, like the simple pleasures associated with bagged lunchmeat and beaten boots in the corner. And then there is grit, one of the main genes in the DNA of American coolness."

Demand for decay could spell a new era for post-industrial cities -- or run its course as a faddish blip that attracted more media coverage than actual converts. Piiparinen believes the shift could last, as more and more people find themselves not just priced out, but burnt out by increasingly tidy, boutiquey cities like New York and Seattle. "The country in the 2000s, it became about growth, glamour, living beyond your means," he says. "It was all aspiration. Now we're comparing the foreclosed glass condo tower to the old brick building that's stood for a hundred years."

But Rust Belt chic is at least partly a romantic fantasy, and that makes it a risky way to try to revitalize. Last year, Guernica magazine ran a withering critique of what it called "Detroitism," the fetish for crumbling urban landscapes mixed with eccentric utopian delusions, "where bohemians from expensive coastal cities can have the $100 house and community garden of their dreams." What these dreams seldom include, however, are the almost unimaginable systemic problems many of these cities suffer from: failed schools, violent crime, the threat of municipal bankruptcy. Photographers parachuting in to shoot Michigan Central Station and Anthony Bourdain's gushing endorsement may be clouding the fact that cities in crisis won't be lifted by chicness alone.

What struggling cities need are jobs, and not just jobs at coffee roasteries in abandoned railroad terminals that make for great style-section articles. "The only way [a turnaround] will really happen is by reintroducing meaningful, equitably compensated work into these cities," says Catherine Tumber, author of "Small, Gritty and Green: The Promise of America's Smaller Industrial Cities in a Low-Carbon World." "This longing can be expressed aesthetically, but it can only be satisfied by restoring the workforce."

That kind of pragmatic attitude defines Jim Cossler's approach. The CEO of the Youngstown Business Incubator in Youngstown, Ohio, Cossler wants one distinctly non-gritty thing for his city: software companies. "We don't want to take any other company," he says, because software firms are cheap to start up, their location is irrelevant, and they either succeed or fail quickly.

Sexy, it ain't. But the approach is simple and efficient: YBI uses LinkedIn to find young people who grew up in Youngstown but then moved away and now work in the computing field. "Then we make this pitch to them," says Cossler. "We pitch them the fantastic software industry growing here in Youngstown, and the prospect of moving back to where their parents and grandparents are, and oh, by the way, have you seen our real estate prices?" So far they're communicating with 1,800 of what he calls the "Youngstown diaspora," and 187 of those -- who now work everywhere from Austin to Tokyo to Tel Aviv -- have asked to meet with him. But Cossler doesn't believe that anyone who didn't grow up in Youngstown will ever move there. "We're making the case that they could run a software company for a fraction of the cost of Chicago, and their kids can see their grandparents more than once a year."

Of course, Youngstown, population 60,000 and falling, is no Cleveland. And certainly, whatever tactics will work should be employed, be they gritty aestheticism or unsexy pragmatism. But it does point to a conflict: A lot of people love glassy condo towers. They may not want their city to be shabby. There could be potential Rust Belt returnees who disagree with Piiparinen's opinion that Cleveland's ossifying railroad bridges are the city's "best pieces of public art." Marketing a city as rough-hewn and rusty could attract a certain type of resident, but inadvertently repel another.

"I think there's a certain schizophrenia going on in these cities," says Tumber. "The local boosters and government leaders are pushing to rebrand themselves as part of the creative class. But then there are people who recognize that Akron will never be New York, who want to use the assets they do have to create a different kind of urban identity."

There are ways the two can work in tandem. Tumber points to movements like New Environmentalism, part of which is the idea that repurposing old construction makes these cities a greener choice than, say, San Francisco. And there are many High Line-esque acts of readaptation that everyone can agree on -- the Economist recently reported on a dying Cleveland mall that turned itself into an indoor garden.

If Rust Belt cities did find themselves in the position of having both decay and upscale development -- if industrial loft apartments started selling in the millions and Cleveland became as well branded as Brooklyn -- many residents might consider that a good dilemma to have. "This whole process of using the beauty and aesthetics of decay to revitalize, it's a paradox you can never get out of," says Piiparinen. "We're competing with other cities to attract eyes and talent, and so we're going to use our grit, our authentic landscapes, our coolness. Just don't cheese it up. Don't get cute. This Rust Belt chic, it could be a way toward something good."