How I met my mother

After our dramatic fights, I swore I'd be a different kind of mom than my mom. I didn't realize how similar we are 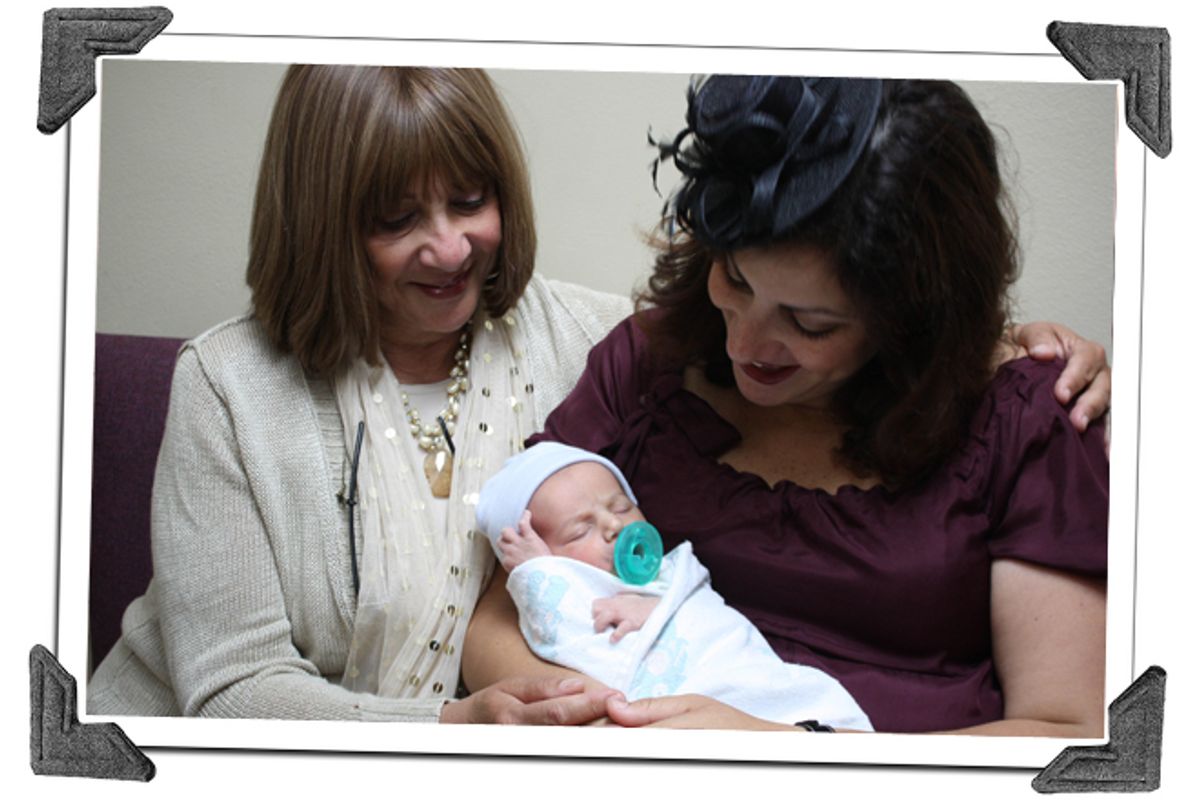 A photo of the author with her mom and son. (Reyna Zack Photography/Melissa King via Shutterstock)
--

I could say we didn’t get along, but that sounds benign. There are plenty of people I don’t get along with, but we’ve been able to opt out of each other's lives. This was my mother, and though we both would have opted out if we could, we couldn’t — except for the brief year I went to live with my father, which was a mistake — and so we didn’t.

I wish I could tell you exactly why we didn’t get along. Maybe I resented my parents’ divorce, and because she screamed louder, I blamed her more. Maybe I blamed her for seeming to hate me. (I was what was called, back before all children were pathologized, a “difficult child.”) She felt mothers should be respected universally, and I felt like we should talk everything out. I wanted to be understood. She wanted me to understand that I wasn’t her friend, I was her daughter. When she hears my sister using the parenting language of today on her son – “I hear that you’re frustrated, because it’s frustrating to not be able to own a machine gun, but you just can’t have one” – she rolls her eyes and thinks back to the days when a kid who asked for something unreasonable could just be sent to his room.

As I grew older, I went from “difficult” to “rebellious.” There were accusations, door slams. We are both temperamental and quick toward theatrics, both prone toward shaking our hands at the heavens and screaming, “Why me?!”

Eventually, though, we learned to get along. We still do. When I had children, I promised our home would be calm and reasonable. We would talk everything out. We would never, ever yell.

At first, I was a different kind of mother than she was. My son was quiet and compliant -- and sweet. He hugged me when I put my arms out; he never defied me, at least not until much later. My mother would visit, and I would show her how loving and not screamy I was with him. I sat on the floor with him and played with him during those visits, though I find stacking and shape-sorting excruciating. By my example, I would try to teach her how nice and easy it could have been. On our daily phone calls, I would show how I was the model of patience and how I was understanding and not reflexively impatient. I was showing her how she could have been a better mother; in truth, I was waiting for an apology.

Then my younger son was born. He is beautiful — you should see him — and he is charming. He smiled, I swear, the day he was born. He laughed when he was just 4 weeks old. Then, about two months after we brought him home, he opened up his mouth and began screaming, and he didn’t stop for something like 15 months. He has not yet slept through the night for more than a week in a row. He is old enough now to get very angry at me and throw tantrums, and for those tantrums to upend our household. He’ll grow out of them, or maybe he won’t. Maybe he’ll sit at his desk in 34 years and write an essay about what a terrible mother I was.

But that will be his essay. In my essay, I start to scream. I scream so loud that the neighbors want to know if, um, everything’s OK in there? I scream so much that my throat is raw. I give looks that are identical to the ones my mother gave — sharp and pointed — not just to the younger one, but to the older one, who has started testing my limits, too. I send the 2-year-old to his room. I try to speak the way my sister speaks, to tell them that I understand their frustration, but honestly, I don’t, and I don’t think I should have to. I tolerate no amount of disobedience or backtalk. My husband comes home to find me a frazzled mess.

I am, in short, the kind of mother my mother was.

But my mother is a different person than I realized. I first came to understand this after the delivery of my older son. It was traumatic, and I was depressed for months following it. My mother came to stay with me and tried to show me new ways of having perspective on this, but all I kept saying was that she had never had to triumph over anything this difficult. As I sat in a dark trance, rocking my baby, she told me to put him down while he slept. I wouldn't. I was going to be a calm, peaceful -- OK, completely depressed -- presence for this kid in a way she never was for me.

The day before she returned home from her visit, she had been told that a lifelong heart condition had reached critical condition. I knew nothing about this. She told me about it when she returned home. She called to tell me that she was scheduled for open-heart surgery. I knew she had a heart murmur, but that sounded so -- I don't know -- benign.

She told me the whole story: She’d been born with a heart condition. When she was a young child in Israel, the doctors told her she wouldn’t live very long. They didn’t let her play in gym class or ride a bike. They told her she would never have children. When she got to America as a teenager, she decided that she would live on her own terms. She bought a pack of cigarettes and didn’t tell anyone about her heart condition. No one would tell her how to live her life. She married my father, and she spent the next 10 years gestating me and my several sisters and smoking Kents, alternately.

I was stunned. I had never known my mother had such a secret. I’d never know that it was she who was the rebellious one. I started to see my mother as someone about whom I did not have the whole picture. I was starting to find common ground with my mother. We were both rebellious, it turns out, but she was truly brave.

I came to imagine a new side to my mother: The bad-ass side, the take-no-crap-from-anyone side. And here is where I should mention my mother’s looks. She is so, so beautiful. She was devastating to look at. Even with her children in tow, yelling at them in some public mall, men would turn to look and women would comment with envy on some aspect of her body or face. In her jewelry box, I found letters from old boyfriends, begging her to stay.

And you should see the photo albums: The white bikini, the strapless dress, the beehive hairdo with the liquid eyeliner, that trench coat. She did not know how long she would live, but she would live until then. She would live and die according to her own terms. V’ze-hoo, as she’d say in Hebrew: And that’s that.

But we have no idea who our mothers really are. They are mysteries to us, and we don't ever have all the information. Even my kids, who will one day use their Google brain chips to read my essays — me, the oversharingest woman in the world — still won’t know my entire story.

Yet, lately -- maybe because of the behavior that I’ve tried and failed to control -- I’ve started to wonder if the kind of mother I had wasn't exactly the kind of mother I needed. Because I turned out fine. I am a loving daughter, a loyal and warm wife, a doting (if screaming) mother. I am what my mother wished for. So are my three sisters. And we are sure of nothing if not that we are loved by our mother.

Or could it be that motherhood is far more forgiving than we ever could imagine? Could it be that, later, our children will forgive us our faults because there is nothing like a mother who screams at you and suspects you and checks on you at midnight and is afraid for your future to show you how loved you are?

My older son was just a few months old when my mother’s heart surgery was scheduled. We flew back to New York on a redeye and went straight to the hospital just in time to see my sisters head into the waiting room: It was almost time to begin. I sneaked into the pre-op room, where babies were not allowed, and where she’d been given a drug to relax her as they arranged the IVs and monitors so they could be wheeled into the operating room.

“I’m sorry I made your life hard,” I told her, just in case, as two nurses carefully guided her bed out of the pre-op room and into the hall.

“You made my life a joy,” she told me. I held my son close on my hip as they wheeled her down the long hall, all the way down, until she became so tiny that I couldn’t see her at all.