As week-long protests against the NATO summit begin, city police may use a potentially dangerous sound cannon 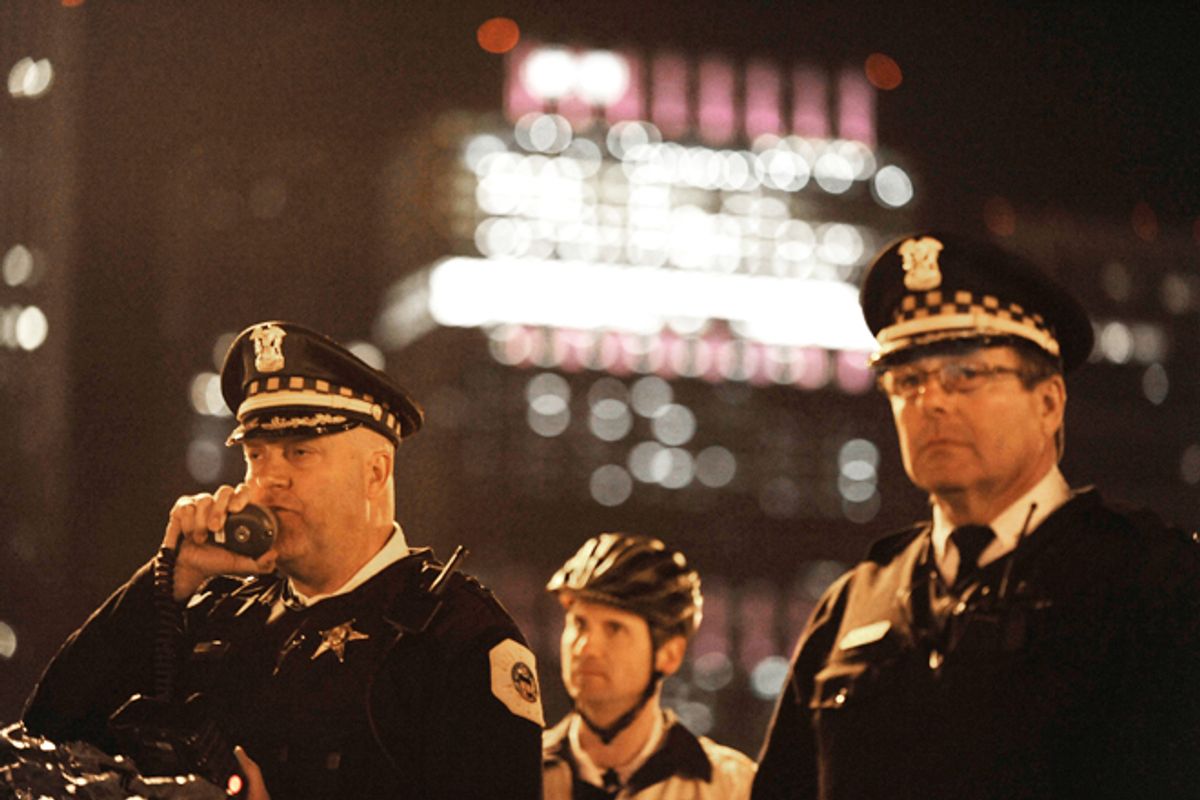 This week, Occupy Chicago welcomes allies from around the country and the world as they descend on the Windy City to protest the weekend's NATO summit. The Chicago Police Department is ready: Not only has the city passed strict new protest ordinances, but it's been stockpiling serious riot gear in anticipation of conflict with the protesters.

According to a report from the Guardian's Adam Gabbatt, in recent months the Chicago police have spent over $1 million on riot equipment, and are preparing to use a controversial LRAD (long-range acoustic device) -- a sound cannon designed to cause extreme pain to those in its path.

The Chicago Police Department is pitching the LRAD largely as a means to communicate with large crowds:

"This is simply a risk management tool, as the public will receive clear information regarding public safety messages and any orders provided by police," Chicago Police spokeswoman Melissa Stratton told the Guardian.

However, during its first outing at a U.S. protest, during the G-20 summit in Pittsburgh in 2009, police blasted non-lethal sound waves from the device as a crowd deterrent. Unlike firing tear gas or swinging batons, deploying the LRAD does not create a dramatic media spectacle; indeed, videos from the Pittsburgh protests capture the LRAD emitting little more than a high-pitched siren. Those within the sound cannon's range, however, have described immense pain and severe headaches and -- in some cases -- irreversible hearing damage. LRAD Corp., which produces the weapon for the military and domestic policing, said that anyone within 100m of the device's directed sound path will experience "extreme pain," according to Gizmodo.

"In Pittsburgh, they directed the LRAD at a crowd coming up the center of a wide street, then sent tear gas canisters down the sides of the street. Tear gas is painful, but everyone ran into the tear gas to get out of the LRAD path," one protester who attended the Pittsburgh G-20 told me, asking to remain anonymous. Chicago's Police Superintendent Garry McCarthy has recently expressed that he believes tear gas to be an ineffective crowd control device -- and based on lessons from Pittsburgh, the LRAD can produce a painful enough effect to force crowd dispersal without the dramatic media impact tear gas creates; it's certainly a more insidious weapon. (Indeed, the Chicago police riot during the 1968 Democratic National Convention went down in infamy partly because of the excessive use of tear gas.)

Norm Stamper, the former Seattle police chief who oversaw the policing of the Battle in Seattle in 1999, has learned some hard personal lessons about protest policing. Stamper resigned after his department was condemned for excessive use of force and tear gas against the '99 World Trade Organization protesters; he has since become an outspoken critic of harsh crowd control techniques. Of the LRAD Stamper told Salon, "I'm not a fan. And it's not just because I suffer from tinnitus. Everyone, without ear protection, is at risk for permanent hearing damage. Not worth it, as far as I'm concerned."

Mayor Rahm Emanuel has assured Chicagoans that no taxpayer money will go toward covering any summit activity (federal and private money was secured for this purpose). However, Chicago organizers and participants in the counter-summit have nonetheless balked that money can be made available for such purposes, while public services, such as mental health clinics are being shuttered (six out of 12 of the city's mental health clinics are set for closure, which sparked the week-long occupation of one clinic by staff and clients with the support of Occupy Chicago).

Occupy Chicago's press committee late last week held a conference to give the media a preview of the week of protests. Although it was made explicit that actions would take place that have not yet been disclosed or even planned, scheduled protests include a march Tuesday organized by National Nurses United (who are paying for 12 busloads of protesters to get to Chicago from across the country). The NNU march will end with a musical performance by Rage Against the Machine guitarist and "guitarmy" instigator Tom Morello, and aims to speak out against austerity measures implemented by the G-8. Having changed original plans to hold the G-8 summit in Chicago the same week as NATO, G-8 leaders are instead meeting this week in the rural seclusion of Camp David. Organizers plan to make their opposition to the G-8 visible in Chicago nonetheless.

Other actions specifically targeting NATO include a procession to the summit headquarters on May 20, during which veterans of the Iraq and Afghanistan wars plan to hand back their service medals to NATO generals in protest against ongoing wars. Occupy Chicago also has plans for an unpermitted march to shut down Boeing's main office on May 21, in opposition to the government defense contracts the company receives.

Occupy Chicago, CANG8 and other organizing groups have pitched all counter-summit activity as "peaceful," prompting further outcry that the city is preparing a militaristic crowd control response, especially with the threat of the LRAD.

Clarification: An earlier version of this story suggested the LRAD was a new purchase for Chicago. The riot gear is newly purchased and CPD are preparing to use the LRAD, which they already owned.