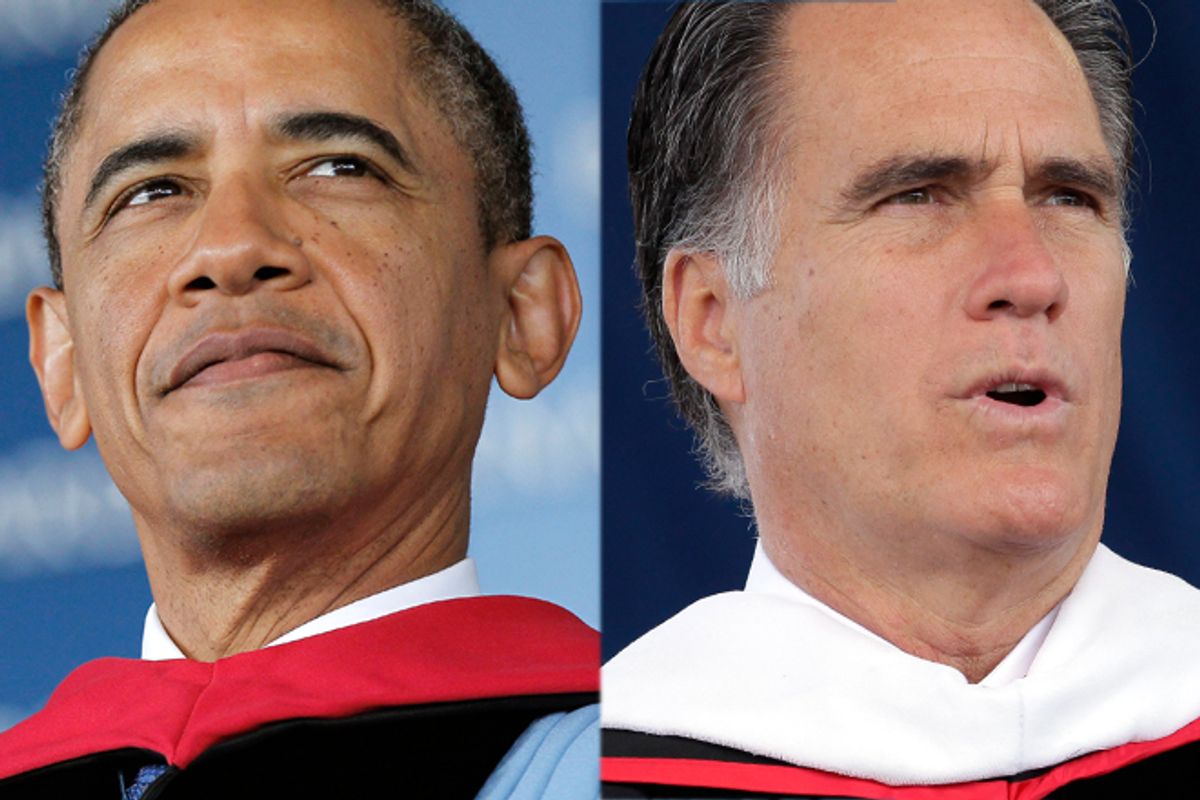 It's come to this: “An incredibly boring white guy.” That was how a “Republican official familiar with the campaign officials” described the “prized pick” for Mitt Romney’s vice presidential candidate. Framed as the Romney campaign’s desire not to make John McCain's mistakes, it distills something fundamental about this election -- how it's become a culture war in the most profound sense, one way of looking at the world diametrically opposed to the other.

This is not supposed to be the “change” election, and yet somehow we have an incumbent who, at a commencement address at Barnard just today, approvingly drew continuity from “Seneca Falls to Selma to Stonewall,” and talked about black and Latina girls seeing themselves in his administration. His challenger, meanwhile, visibly hopes same-old and presumed competence carry the day. There was so much in the 2008 election that scrambled the familiar calculus and allegiances – the young black man with the exotic upbringing against Hillary, the white boomer woman; and McCain, the only “white guy” in the picture, recruiting a guns-and-baby-toting Republican woman praising Title IX. But this week all you have to do is read Barack Obama’s speech at Barnard and Mitt Romney’s at Liberty University to see a dichotomy as stark as the one on either side of a picket line.

What mattered in Obama’s speech wasn’t the standard praise for his wife, mother or mother-in-law, or his hopes for his daughters. It was how he talked about the Constitution, of which he said, “Yes, it had its flaws -- flaws that this nation has strived to perfect over time. Questions of race and gender were unresolved. No woman’s signature graced the original document.” But, he added, “What made this document special was that it provided the space -- the possibility -- for those who had been left out of our charter to fight their way in. It provided people the language to appeal to principles and ideals that broadened democracy’s reach. It allowed for protest, and movements, and the dissemination of new ideas that would repeatedly, decade after decade, change the world -- a constant forward movement that continues to this day.”

It’s a formulation that sees the inclusion and participation of the excluded – even when the process is painful – as the consummation of the country’s ideals, not something from which it needs to be “taken back.” Contrast that with Romney at Liberty this weekend, in which he cited David Landes to declare that “Culture makes all the difference ... Central to America’s rise to global leadership is our Judeo-Christian tradition, with its vision of the goodness and possibilities of every life.” There was the purposeful declaration that “marriage is a relationship between one man and one woman," the shout-out to the anti-gay marriage Chick-fil-A founder and various clergy, the sermonizing. And crucially, there was an invocation of resentment, of persecution: “Your values will not always be the object of public admiration. In fact, the more you live by your beliefs, the more you will endure the censure of the world.” (Who’s supposed to play the politics of victimization, again?)

As for “incredibly boring white guy,” no one sentient would deny picking Palin was a mistake, but it wasn’t a mistake because she was a woman – the implication of that unnamed Republican’s comment, intended or not. It was a mistake because the McCain campaign thought demographics alone would give them the sheen of being transformative, and it blinded them to all else.

It’s not crazy to think that this time, safety and competence might appeal at a time of economic uncertainty. The Romney campaign didn’t create the supposition that a white guy is the standard, the safe and the certain, or that “diversity” is something you get one chance to try -- even if they’re only too happy to exploit it. But in the end, from what can be determined from her wildly erratic public performance, Palin turned out to be a fairly conventional social conservative. (The erratic part ended up making all the difference.) This time around, Romney and his camp are manifestly uninterested in heeding what, per Newsweek’s headline today, “New Mexico’s Governor can teach the GOP.” That would be Susana Martinez, the first Latina governor, a pro-life, pro-gun Republican who differs from Palin in a crucial way: The worst thing a critic is quoted saying about her is that she’s “maintaining a competent, minimalist administration so there’s nothing to hang around her neck during the next campaign.” That sounds … incredibly boring, actually.

It’s not just being female and Latina that would set Martinez apart from the current GOP direction, though given their steady alienation of those groups, that’s not nothing. She’s chosen not to be a mother, off-message for a Republican moment that considers elaborate mother-worship an effective rejoinder to accusations of misogyny, and she has no patience for what little we know about Romney’s immigration stance (“‘Self-deport?’ What the heck does that mean?”).

But most significantly of all, she essentially dismisses the fiercest conservative dogma of the moment, calling the mantra of “lower taxes” “this five-liner of nothingness,” to Newsweek. The primary caretaker for a disabled sister, she says, “I believe in providing services to adults and children who can’t take care of themselves … Sometimes Republicans engage in number-crunching analysis that doesn’t always take the neediest into account.” It was a clear shot at the Ryan budget, an article of faith for Republicans – and a reminder that even when wrapped in social conservatism, there’s a whole other sort of radicalism at stake in this election.