The EU's future will become clearer this week, as Francois Hollande meets Angela Merkel before heading to the U.S. 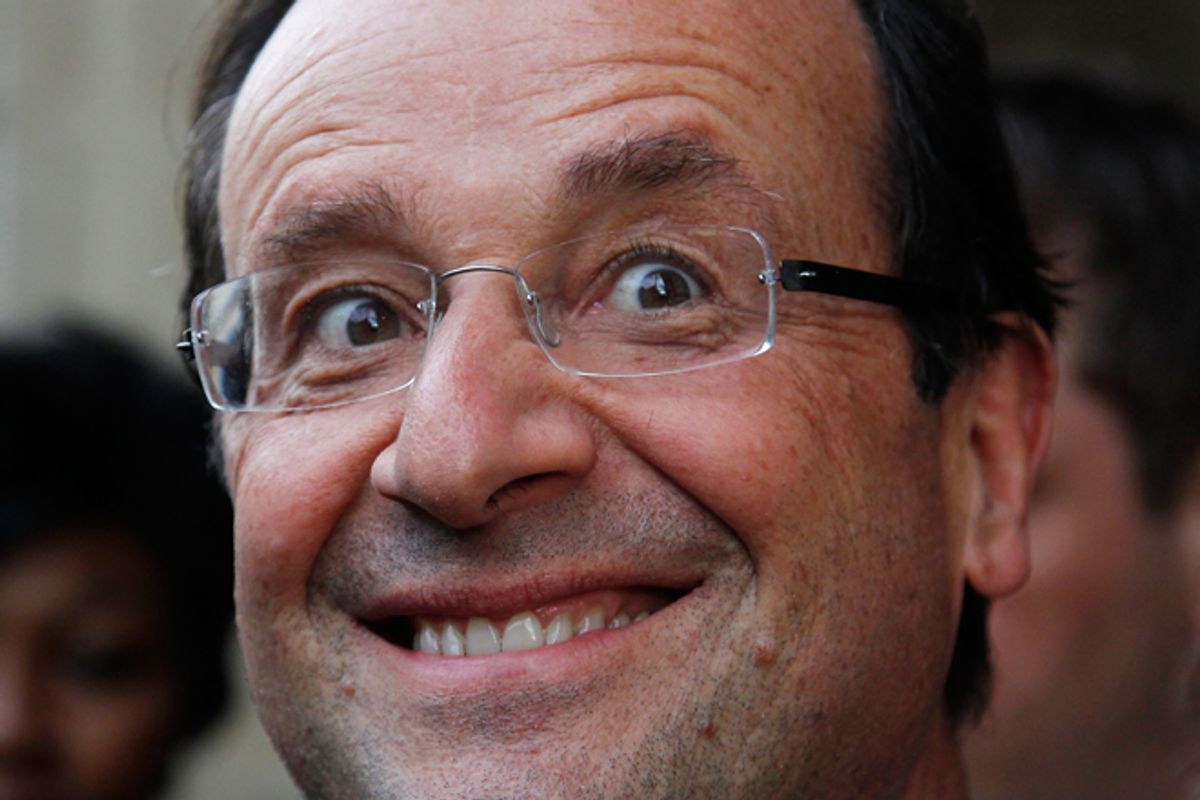 Angela Merkel, Europe’s master schoolmarm, scolds her neighbors that they have “no alternative to austerity.” François Hollande, the new French president, preaches the need for growth, challenging Merkel’s leadership with a social democratic alternative. The two meet in Berlin tomorrow, for the first time since Hollande ousted Merkel’s pal, Nicolas Sarkozy. And the tension will be on display later this week, as they head to the United States for the G-8 and NATO Summit. No matter how diplomatically conducted, their conflict will determine the direction of Hollande’s presidency and the very future of Europe.

The debate can be confusing, especially for Americans. Even as Merkel insists on cost cutting, her economic team rushes to explain that Germany has always been pro-growth. Well, maybe, but Merkel’s “growth” more likely means wasting Greece, Ireland, Portugal, Spain and France. Hollande, a one-time professor of political economy, understands this as he preps for the grip of Madame Merkel’s open arms. He knows that she will try to smother him with her much-loved Treaty on Stability, Coordination and Governance, which would press thorny sanctions on any country that fails to hold its deficits below 3 percent of gross domestic product. This fiscal compact, drawn up by Merkel and Hollande’s defeated predecessor Nicolas Sarkozy, mandates harsh spending cuts that would further deflate the continent’s already weak economies, boost  unemployment, agitate unrest, reduce GDP and thereby increase everyone’s debts and deficits — including very likely her own.

Before the treaty becomes binding, though, it still has to be ratified by at least nine more nations, including Germany, where Merkel needs the support of the opposition Social Democrats to get the measure through parliament. Hollande, who is closely allied with them, has promised to block ratification unless Merkel agrees to more growth.

To date, she’s said OK to €10 billion in new funding for the European Investment Bank, greater pro-growth flexibility for the European Central Bank, possible delays for Spain, if not for Greece, on deficit reduction, maybe some Europe-wide money for infrastructure projects like roads and rails, and boosting wages for German workers even at the risk of slightly increasing domestic inflation. However, politically, Merkel’s “growth agenda” appears much too late. Right-wing extremists are already showing new muscle across Europe. Anti-austerity protesters have taken to the streets in Spain and walked out on strike in Britain. Her Christian Democratic Union took a routing in a second state election on Sunday, which gravely weakens Merkel in the run-up to next year’s national elections. Her political kindred lost elections in France and Greece. The latest polls from Athens predict that the left-wing anti-bailout Syriza coalition will win new elections in June if, as widely predicted, the pro-bailout politicians fail to form a governing coalition.

Economically, the German growth talk sounds far too limited and is simply wrong-headed. Taken all together, Merkel’s concessions would barely touch the anti-growth impact of the fiscal compact’s prescribed spending cuts. Does the lady really believe that suicide, personal or collective, is painless?

Growing Irish, Greek and Spanish rebellion has also thrown light on two of Europe’s dirty little secrets. Back in the 1990s, Germany was suffering badly from the huge costs of unifying East and West. The novel solution came with the invention of the European Union and the creation of the euro. German and other northern European banks began flooding the European periphery with low-interest loans. These paid for massive imports, mostly from German industry and much of it from the low-wage factories in the newly liberated Eastern Europe. (In Ireland, farmers chuckled over all the new EU sheep that so crowded the pastures that they fell into the sea.) The late British economist John Maynard Keynes, the bête noire of austerity mongers, could hardly have devised a better application of deficit spending.

Then came the downer. Much like U.S. mortgage creditors, the German and EU lenders knew that many of their borrowers could never pay back the loans without government intervention. They knew that the Greeks and others were hiding the extent of their indebtedness, often with help from U.S. investment banks and their deadly credit default swaps.  Far worse, German industrialists – like Siemens and Ferrostaal – paid bribes by the millions to highly receptive Greek officials. So much for German self-righteousness and Greek corruption.

Shorn of the shoddiness, European institutions today could easily provide a similar flow of life-saving funds to the faltering economies through a combination of printing money, borrowing, and raising taxes, which could include a Tobin tax on financial transactions. Given the low level of demand, any inflation would be minimal and could even prove beneficial. All of Europe would then grow, and the beneficiaries could pay down their deficits when times get better. Lord Keynes taught that as well, though it’s a lesson that too many of his would-be followers forget to follow.

As the Nobel Prize winning economist Joseph Stiglitz has explained too many times to count, “If Europe – particularly the European Central Bank – were to borrow, and relend the proceeds, the cost of servicing Europe’s debt would fall, creating room for the kinds of expenditure that would promote growth and employment.”

The Germans had no problem following the  Keynesian path when it served their  own interests, but now Madame Merkel insists:  “Growth on credit would throw us back to the start of the crisis and therefore we will not do that.” Do as we say, not as we did.

Compare Germany’s earlier credit-driven success to the bailout deal that Merkel, the IMF and the European Union imposed on the Greeks and you’ll discover the second dirty secret. No one – neither economists nor policy-makers – ever imagined that the required cuts, privatizations and fire sales of public treasures would allow the Greeks to dig themselves out of their ever-deepening hole. The bailout was never meant to help Greece. Its goal was primarily to buy time: first for the banks and other financial institutions that lent Greece money or hedged the loans; and then for the EU to gather funds to preempt a run on Italian, Spanish, Portuguese – and even French – banks should the Greeks finally abandon the euro (which many German officials now want them to do).

All this prickly platter comes along with Madame Merkel’s “open arms” when she welcomes Monsieur Hollande first on Tuesday in Berlin, and then again in the United States for G-8 and NATO summits later in the week, and it will bubble up at an informal EU summit in Brussels next week on May 23. Merkel hopes that Hollande will accept her concessions as sufficient and have France ratify the austerity-minded fiscal pact. Never a dunce, the French president is more likely to hold off on any firm commitment until next month’s French legislative elections, which his party expects to win.

What will he do then? Will he put his stamp of approval to Madame Merkel’s pro-growth talk? Or will “the red Socialist” as Americans like to characterize him, hold out for a serious growth pact that could bring Europe back into the black?  That will be the big test of what François Hollande is made of.