More and more thinkers are warning that our glory days are over, but their arguments are flawed -- and old 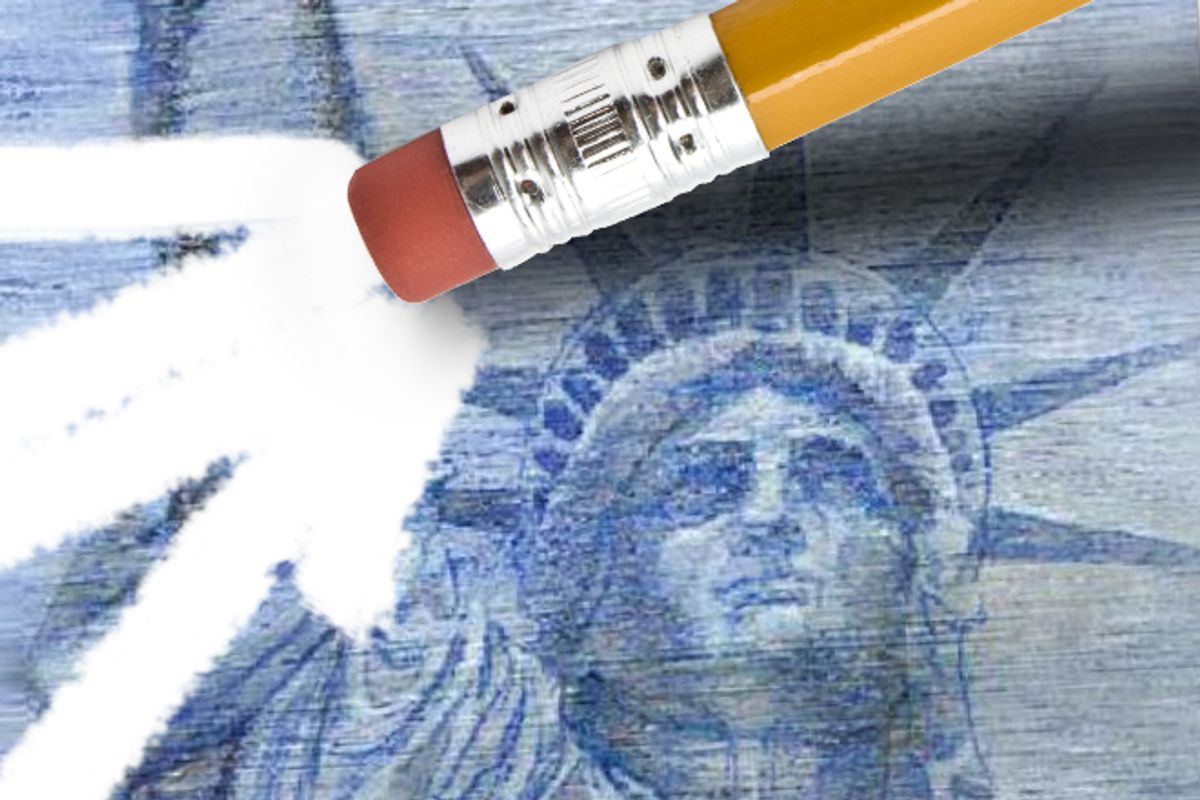 This article was adapted from the new book, "Power and Willpower in the American Future" from Cambridge University Press.

“[T]he United States cannot afford another decline like that which has characterized the past decade and a half....[O]nly self-delusion can keep us from admitting our decline to ourselves.”

In these words, one of America’s most distinguished strategic thinkers and policy makers expresses alarm at America’s condition and the perils it faces. The warning seems timely, yet it was written more than half a century ago as an assessment of the Soviet threat, problems with allies and the developing world, and in frustration with what the author saw as dangerously inadequate policy and strategic choices. Henry Kissinger was by no means alone. He cited George Kennan’s lament about our domestic failings with race, the cities, the education and environment of our young people, and the gap between expert knowledge and popular understanding, even while criticizing Kennan’s focus on those problems to the exclusion of military and diplomatic threats.

Since World War II, the United States has been the preeminent actor in world affairs. Its status at the end of that conflict, its role in creating postwar international institutions, its leadership in the reconstruction of Europe and Japan, and its dominant status within the Western alliance during the Cold War are well known and beyond dispute. With the collapse of the Soviet Union in 1991, America emerged as the lone superpower. Yet some two decades later, its position of both absolute and relative power appears to have deteriorated. Many scholars and strategists point to economic, structural, political, and even military vulnerabilities, and contend that the United States is in serious decline. Meanwhile, the rise of important regional actors, especially Brazil, Russia, India, China and South Africa (the BRICSs), as well as others such as Indonesia, Turkey, Iran, and the increasingly prosperous and dynamic countries of East and Southeast Asia, is said to be seriously diminishing U.S. primacy in world affairs.

These depictions are pervasive on the Internet and in the press. A quick Google search for the term “American decline” yields 117 million “hits” in 0.13 seconds. A columnist for The New York Times writes that, “Wherever you choose to look . . . you’ll see a country in sad shape.” A leading German news magazine headlines, “A Superpower in Decline.” And from the realm of pop culture, the comic book action hero Superman renounces his U.S. citizenship. But are such assessments accurate?

Two propositions are widely asserted by those who see the ebbing of American predominance: first, that America itself as a society, an economy, and a political power is in decline; and second, that its international primacy is eroding as a result of the rise of other countries.

On the domestic front, the effects of a severe financial and economic crisis, an unprecedented national debt and deficit, a yawning balance of trade and payments deficits, and an aging and overloaded infrastructure lead a prominent financial journalist to foresee “the beginning of the end not just of an illusory ‘unipolar moment’ for the US, but of western supremacy in general and of Anglo-American power, in particular.” Fareed Zakaria, a widely quoted public intellectual, warns that America has become an “enfeebled” superpower and embellishes his case by observing that the world’s tallest Ferris wheel is now in Singapore and the largest casino is in Macao. For good measure he adds: “America’s success has made it sclerotic.”

Without a doubt, the United States now confronts serious problems at home and abroad. Nonetheless, recent declinist arguments carry an unmistakable echo of the past. Antecedents of these views were apparent in the 1970s, 1980s, and 1990s, and on occasion were even phrased in identical language. Indeed, declinist proclamations have appeared on and off since the late eighteenth century.

For the United States, historical as well as relatively recent comparisons provide evidence for its robustness and adaptability as a society and as a leading power. Time and again, America has faced daunting challenges and made mistakes, yet it has possessed the inventiveness and societal flexibility to adjust and respond successfully. In this regard, neither the rise of the BRICS and other regional powrs, nor competition in a globalized world economy, nor “imperial overstretch,” nor domestic weakness are by themselves bound to have the transformative effects that have been so often suggested. Despite major changes and severe challenges, these domestic and international constraints do not in themselves predetermine the end of America’s international predominance. All the same, just because America has previously overcome adversity and retained both its strength and international primacy does not guarantee that it will do so now.

Debate about America’s world role is nothing new. One notable version of it took place in the late 1980s. Paul Kennedy’s 1987 best seller, "The Rise and Fall of the Great Powers," became one of the most widely cited books of that era. Kennedy cautioned that the United States ran the risk of “imperial overstretch,” which he defined not just in terms of military commitments, but in regard to the balance between resources and obligations. In a 1990 response, Joseph Nye was less pessimistic, arguing that the issue was not one of resources per se, but of policy and choice – that is, that to the extent the United States faced a problem, it was because it “lacks the will, not the wallet.”

The problem of “wallet” has since become more pressing. Even before the financial crisis that began in 2008, the historian Niall Ferguson cited the shift in America’s balance of payments and the change in its net international investment position – the difference between American-owned assets abroad and foreign-owned American assets – as a sign of deterioration. In doing so, he invoked comparisons with the decline and fall of the Roman Empire nearly two millennia ago. The comparison is tempting, but as with the parallels to the British experience of the past century, its relevance is tenuous at best.

Certainly the domestic situation is more difficult now than two decades ago. Yet while these problems should not be minimized, they should not be overstated either. Contrary to what many observers would assume, the United States has managed to hold its own in globalized economic competition and its strengths remain broad and deep. For the past several decades, its share of global output has been relatively constant at between one-quarter and one-fifth of world output. According to data from the International Monetary Fund (IMF), in 1980, the United States accounted for 26.0 percent of world GDP, and in 2011, 21.5 percent. These figures are based on GDP in national currency. Alternative calculations using purchasing power parities are somewhat less favorable, but still show the United States with 19.1 percent in 2011, as contrasted with 24.6 percent in 1980.

Moreover, America benefits from a growing population and one that is aging more slowly than all its possible competitors except India. And despite a dysfunctional immigration system, it continues to be a magnet for talented and ambitious immigrants. It is a world leader in science and in its system of research universities and higher education, and it has the advantage of continental scale and resources. In short, the United States remains the one country in the world that is both big and rich.

In addition, the American military remains unmatched and, despite intense stress from a decade of war in Afghanistan and Iraq, it has not suffered the disarray that afflicted it in Vietnam. This is evident in terms of indicators such as successful recruitment and performance of the volunteer force, the ongoing quality of the officer corps, and broad public support for the military as well as casualty tolerance. Moreover, in its capabilities, technology, capacity to project power, and command of the global commons, the United States has actually increased its military margin as compared with others, although with the important and challenging exception of China.

Beyond material strengths, the society itself benefits from a durable political system, rule of law, vigorous free press and information media, and a competitive and adaptable economy, as well as strong traditions of entrepreneurship and innovation, leadership and critical mass in new technology, and a history of resilience and flexibility in overcoming adversity.

The declinist proposition that America’s international primacy is collapsing as a result of the rise of other countries should also be regarded with caution. On the one hand, the United States does face a more competitive world, regional challenges, and some attrition of its relative degree of primacy. This process, or diffusion of power, is not exclusive to the post–Cold War era, but began at least four decades ago with the recovery of Europe and Japan from World War II, the rise of the Soviet Union to superpower status, and the emergence of regional powers in Asia, Latin America, the Middle East, and Africa. Still, in contrast to other great powers that have experienced decline, the United States has held a substantially more dominant position. For example, Britain at the start of the twentieth century was already falling behind Germany and the United States, although it did manage to continue for half a century as head of a vast empire and commonwealth.

Because of the enormous margin of power the United States possessed after the end of the Cold War, it should be able to withstand erosion in its relative strength for some time to come without losing its predominant status. While it is true that the weight of important regional powers has increased, many of these are allied or friendly. Those that are not (Iran, North Korea, Syria, and Venezuela) do not by themselves constitute serious balancing against the United States and its allies. Russia occupies an intermediate position, at times acting as a spoiler, but not an outright adversary. China presents a potentially more formidable challenge, notably through its growing economic might and the rapid expansion of its military capacity, but it has not yet become a true peer competitor. In any case, and despite the burden of a decade of war in the Middle East, America continues to possess significant advantages in economic breadth and depth, science, technology, competitiveness, demography, force size, power projection, military technology, and even in learning how to carry out effective counterinsurgency, and thus retains the capacity to meet key objectives.

In sum, although the United States predominates by lesser margins, it still remains a long way from being overtaken by peer competitors. However, given profound disagreements about policy, intense partisan rancor among political elites, growing social-class division, distrust of government, and deep disagreement about foreign commitments, nonmaterial factors could prove to be a greater impediment to staying power than more commonly cited indicators of economic problems and military overstretch. The United States retains the power and capacity to play a leading world role. The ultimate questions about America’s future are likely to be those of policy and will.

Power and Willpower in the American Future: Why the United States Is Not Destined to Decline, by Robert J. Lieber Copyright © 2012 Robert J. Lieber.  Reprinted with the permission of Cambridge University Press.