Is it ethical to drive stick? 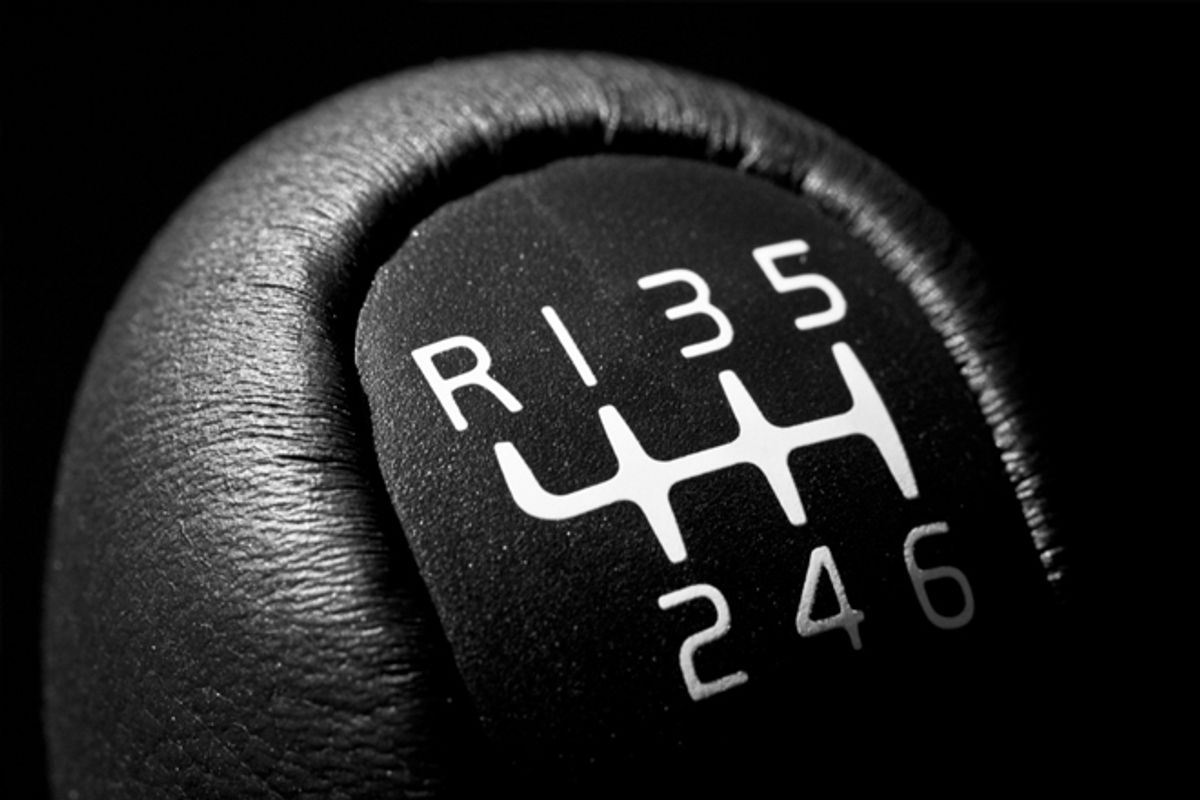 Ever since I first watched my dad drive his chocolate brown Datsun 280 ZX back in the early 1980s, I've been inculcated to believe that driving -- true driving -- can only be performed with a stick shift. From that childhood experience, I came to see the manual transmission as a birthright passed down from my grandfather, to my father, and eventually to me via a series of tense, stall-filled lessons when I turned 16. In my case, after ripping apart the transmission one too many times, my dad went barking drill sergeant on me, eventually teaching me that a stick requires a special kind of focus, and that I needed to ease up more slowly on the clutch in order to get into first gear on those damn inclines. Through the experience, I learned to consider my stick-shifting skill a special talent with transcendent value.

Yes, of course, in the intervening years I've had the chance to drive an automatic transmission. But that has always felt a bit like playing a post-Konami Code game of Contra -- a bit too easy, a bit too idiot proof, a bit too, shall we say, inauthentic. On top of that, the automatic always seemed like a wasteful luxury because it always was more expensive and less fuel-efficient. That difference consequently added an ascetic populism to the inherent machismo of the engine-revving manual transmission.

No doubt, for stick shift enthusiasts, these factors have all conspired to create an alluring mystique around the manual transmission -- one that, according to new data, is on the rise.

Last week, USA Today reported that while "the percentage of new vehicles with stick-shift gearboxes remains a small slice of the new vehicle market," the "the first quarter this year manuals were in 6.5 percent of new vehicles sold, and that's getting close to double each of the past five years." The stick shift is back in a big way -- but is that really such a good thing?

Upon hearing the news, my initial thought -- for aforementioned reasons -- was that, yes, of course it's a good thing. In an ocean of bad drivers and wasteful vehicles, the news seemed like a distant island of hope. I thought that perhaps more motorists are being converted to the automobile religion (cult?) I first was exposed to in Dad's Datsun 280 ZX. And maybe, just maybe, that's a sign that American drivers are wising up, both stylistically and efficiency-wise.

Then I did a bit more investigation, and realized the news might not be so good, and that my quasi-religious fervor for the gearbox may have blinded me to my catechism's new downsides.

In the past, the stick shift was an all-but-guaranteed fuel saver. But not anymore. As AOL Autos notes, computer technology has advanced to the point where "automatics have become so efficient that most of the time their fuel economy is on par with manuals -- and in some cases even better." USA Today notes that such a trend may eventually erase the long-term price differential between manual and automatic transmissions, meaning the manual will lose its frugal-chic appeal. Meanwhile, according to AOL, new technology also boosts automatics' overall performance (read: speed), meaning many driving aficionados have come to prefer the automatic over the manual.

Thanks to all this, on the days I don't bike to work and instead fire up my 11-year-old Saturn and shift it into first gear, I no longer feel so righteous or populist. I feel like part of the problem -- not just because I'm driving a fossil fuel-dependent vehicle, but also because the manual transmission seems like a silly relic. Likewise, word that manual transmissions may be coming back no longer seems like such great news; it seems like more proof that when it comes to transportation, we're still prone to making shortsighted decisions.

And yet, I can't let go of my love for the stick -- or maybe "can't" isn't the right word. Perhaps "don't want to" is more appropriate. If the automobile is still one of the key chronological markers in a typical American's life (and, unfortunately, it still is), the stick shift is a special symbol of our general heritage, and my specific family traditions.

That’s why I was happy to see that there remains one significant reason to still love the manual transmission -- a reason that’s substantive, rather than just aesthetic or experiential. In the age of distracted driving, many believe the stick shift might encourage kids to stay focused on operating their vehicles, rather than operating their smartphones. The idea is that because a manual transmission requires special attention to operate, it doesn’t allow for as much multitasking as an automatic.

While there’s no science (yet) to prove the manual-transmission-as-deterrent-to-distracted-driving hypothesis, the memory of those first harrowing stick-shift lessons -- with my dad imploring me to "really focus, goddammit!” -- suggests to me that there’s something to the theory.

At least, that’s what I’m going to tell myself to justify my stick-shift fetish -- that is, until the automatic fully surpasses the manual in every other way.