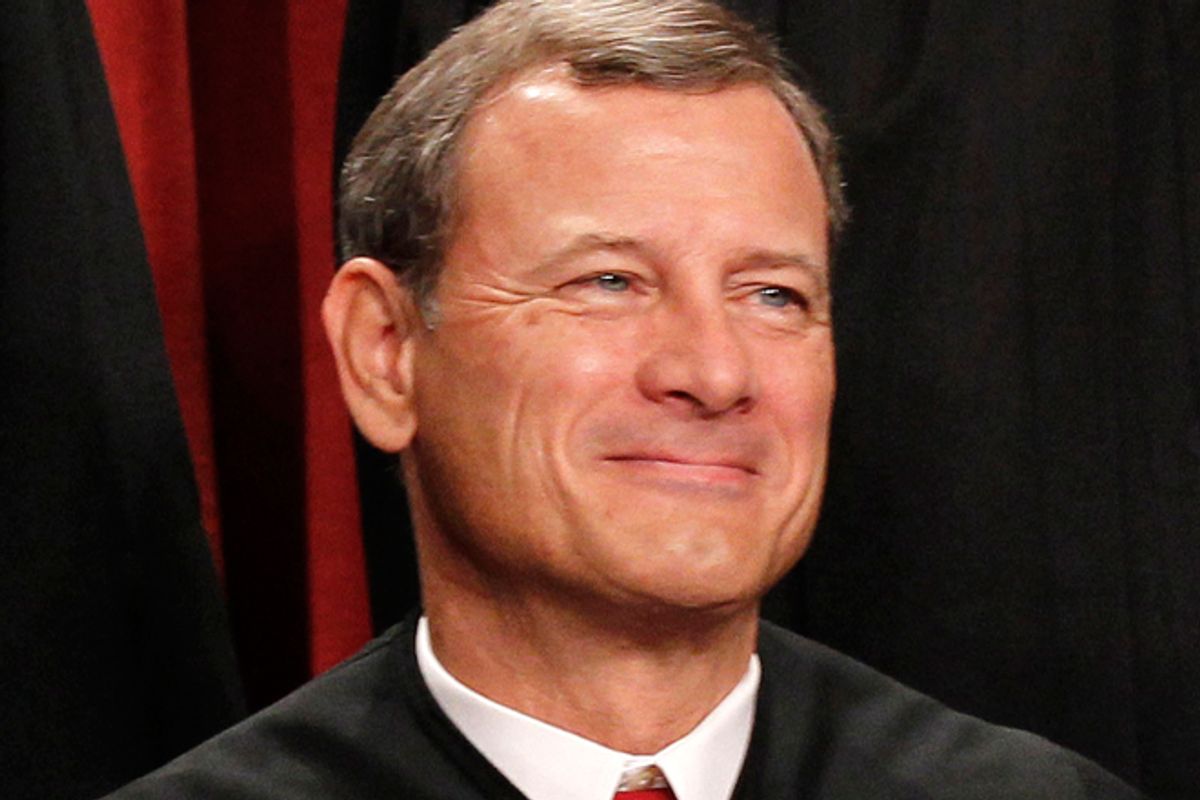 The most important revelation in Jeffrey Toobin's 10,000-word New Yorker piece on Chief Justice John Roberts' takedown of campaign finance laws in the Citizens United case is the extent to which modern conservatism is trying to restore the Gilded Age. That was a time when corporations had more rights than individuals, when a conservative Supreme Court did its best to protect those corporate rights, and wealth and corruption ran unchecked. Of course, we live in a neo-Gilded Age, when income inequality is more pronounced than at any time since the Great Depression, and the Roberts court's decisions in the Citizens United case helps bring us all the way back to those bad old days.

Much is being made of Toobin's revelations about the dramatic internal political divisions and infighting within the court triggered by the CU decision (more on that later). But what I think is most politically significant in Toobin's piece is that it shows the dramatic rightward – and backward -- march of Republicanism over the last 30 years. In January 1982, Ronald Reagan famously wrote in his diary, "The press is trying to paint me as trying to undo the New Deal … I'm trying to undo the Great Society." Reagan was anxious to unravel the anti-poverty programs Lyndon Johnson pushed into place (though not Medicare), but he collaborated with House Speaker Tip O'Neill to pass payroll tax increases to stabilize Social Security for the next 50 to 60 years.

Today's Tea Party, of course, is going after what's left of the Great Society and the New Deal too, trying to privatize Medicare and Social Security and undo the labor protections passed by Congress and many states in the wake of the Great Depression. But the Roberts court wants to go back even further, to the Progressive Era, when some politicians in both parties recognized that the omnipotence of Gilded Age robber barons had to be curbed – and that campaign finance regulation was a good place to start.

Back then a conservative Supreme Court majority also disagreed with that Progressive reform push. In an 1886 tax case it first held that the 14th Amendment's equal protection laws applied to corporations. In its 1905 Lochner ruling, striking down a New York law limiting bakery workers to a six-day 60-hour week, it declared such regulations a breach of contract rights, an "unreasonable, unnecessary and arbitrary interference with the right of the individual to his personal liberty or to enter into those contracts in relation to labor which may seem to him appropriate or necessary for the support of himself and his family." As Toobin observes, "In simple terms, the majority in Lochner turned the Fourteenth Amendment, which was enacted to protect the rights of newly freed slaves, into a mechanism to advance the interest of business owners."

Progressive era reform also included campaign finance regulation, starting with the 1907 Tillman Act, which prevented corporations from directly contributing to campaigns. The Court let the act stand, but over the years a series of rulings by conservative majorities have managed to establish that money is "speech," and though contributions could be regulated, expenditures – speech – could not.

Toobin shows decisively that the court could have kept its decision on Citizens United quite narrow. Attorney Theodore Olson wasn't seeking to strike down McCain-Feingold, but to clarify that it applied to television commercials, not to 90-minute political "documentaries" such as "Hillary: The Movie" (a shriekingly negative "documentary" on the woman who was expected to be the 2008 Democratic presidential nominee). But in oral arguments the conservative justices sought to broaden their purview, and Roberts helped them along. "As the Chief Justice chose how broadly to change the law in this area, the real question for him, it seems, was how much he wanted to help the Republican Party," Toobin writes. "Roberts’s choice was: a lot."

After taking a shot at drafting the CU ruling himself, he later assigned it to "swing vote" Anthony Kennedy, whose views on campaign finance regulation reliably put him with the conservative majority. Assigned to write the dissent, outgoing Justice David Souter accused Roberts "of violating the Court’s own procedures to engineer the result he wanted," Toobin says. That's when Roberts took the extraordinary step of asking that CU be re-argued – though with five justices already committed to a sweeping attack on McCain-Feingold, the outcome of those re-arguments were never really in doubt.

Justice John Paul Stevens, a moderate Republican once on the court's more conservative end, wrote in his dissenting opinion, "Five Justices were unhappy with the limited nature of the case before us, so they changed the case to give themselves an opportunity to change the law." Stevens's dissent continued for a record 90 pages.

At bottom, the Court’s opinion is thus a rejection of the common sense of the American people, who have recognized a need to prevent corporations from undermining self-government since the founding, and who have fought against the distinctive corrupting potential of corporate electioneering since the days of Theodore Roosevelt. It is a strange time to repudiate that common sense. While American democracy is imperfect, few outside the majority of this Court would have thought its flaws included a dearth of corporate money in politics.

Toobin's conclusion is no less scathing: "The Roberts Court, it appears, will guarantee moneyed interests the freedom to raise and spend any amount, from any source, at any time, in order to win elections."

It's worth noting that the most spirited opposition to Citizens United is coming from Montana, where the ties between Gilded Age corporate abuse and campaign finance regulation are perhaps the most explicit. Copper mining interests essentially owned the state in the late 19th and early 20th century, but Montana Progressives pushed a tough campaign finance law as a way of clawing back control of their state from the "copper kings," who Mark Twain wrote "bought judges and legislatures as other men buy food and raiment." Montana's state Supreme Court upheld that 1912 "Corrupt Practices Act" in January, putting the state on a collision course with SCOTUS. Gov. Brian Schweitzer has been one of the most articulate voices against Citizens United, and supports a state ballot initiative that would ban corporate money in politics and make it state policy that corporations are not people.

"Montana's going first, but we have before," Schweitzer told the Huffington Post earlier this month. "It was Montana in 1912 that banned corporate money from our elections. We don't mind leading and we believe it has to start somewhere. This business of allowing corporations to bribe their way into government has got to stop."

But in a world where the Citizens United decision is precedent, it's hard to imagine that ballot measure surviving a legal challenge. Toobin's piece makes clear the stakes in the 2012 presidential race as vividly as anything else does: American democracy can't survive the appointment of more justices like Roberts, Sam Alito and Antonin Scalia, who mainly serve the interests of corporate America. Mitt "Corporations are people, too, my friend" Romney can be expected to give them company in the years to come if he wins the White House.