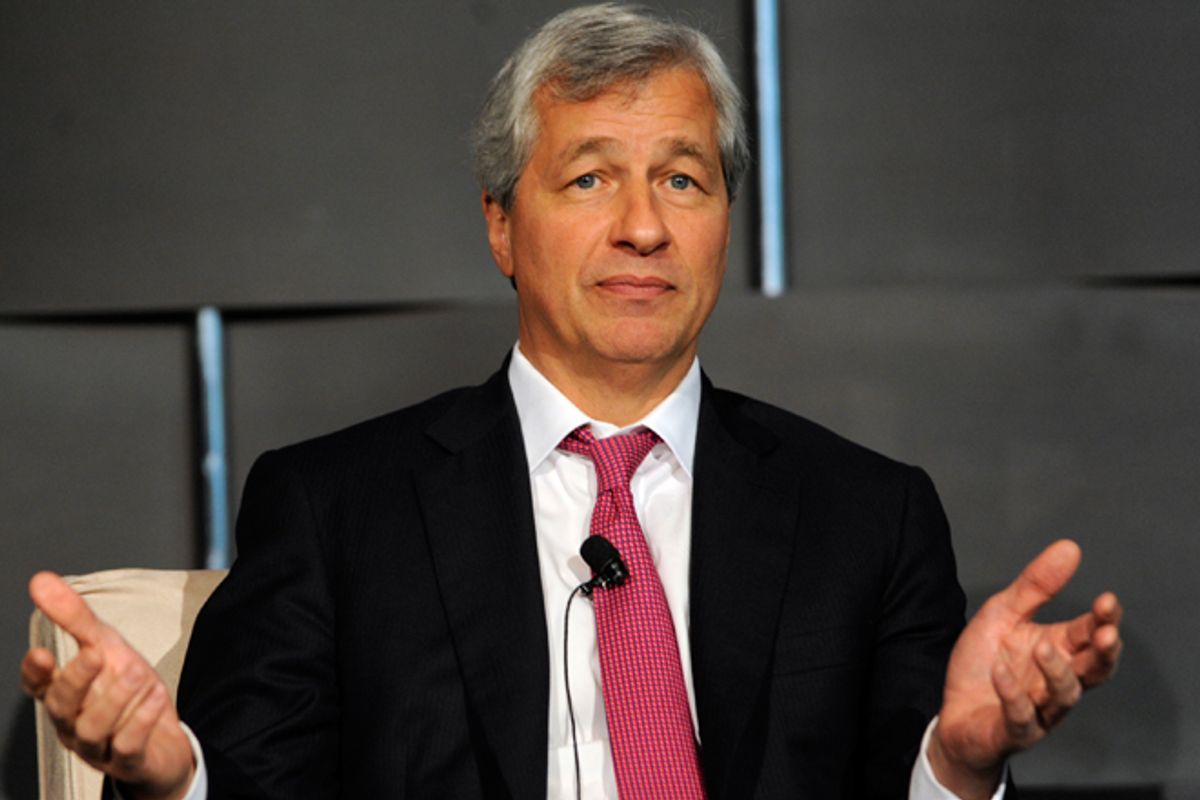 Let's put JPMorgan Chase chairman, president and CEO James "Jamie" Dimon on trial. Mr. Dimon has a reputation for being the sagest guy on Wall Street and an expert at managing risk. JPMorgan emerged from the financial crisis not just unscathed but secure enough to step in and rescue Bear Stearns when the government asked it to. (He gets very mad when you say that his bank got bailed out by the government, and he insists that the government made him take all that free money.) Then his bank somehow accidentally lost billions of dollars last week, whoops! And he is really embarrassed, but not embarrassed enough to fire himself. So, let's put him on trial and force him to explain what good he and his bank are.

The SEC is investigating the massive loss, but that will take a lot of time and the eventual report will probably be very difficult for novices to understand and probably they won't put anyone in jail. Dimon might have to be hauled before Congress to answer questions, but no one watches congressional hearings, and no one likes members of Congress. I think a big televised prime-time tribunal would be best. And then maybe some JPMorgan shareholders, unemployed people, journalists and angry bloggers can just ask him some really simple questions about why he thinks JPMorgan shouldn't be regulated at all.

While I am definitely endorsing a humiliating show trial, we don't have to send Jamie Dimon to jail afterward, even if a jury of people who had their houses foreclosed on them find him guilty. The point of this is to mainly have him on the record, compelled to answer questions plainly and clearly, to an unfriendly audience of non-Davos people.

This very good explainer helps us to understand how exactly JPMorgan came to misplace billions of dollars, but it raises more questions than it answers. Questions like, "Wouldn't it have been better if that $2 billion had been used for almost anything in the world besides shady mega-bank gambling that no one understands?" And, "Doesn't it seem you guys could save a bit of money on salaries and so forth while still achieving basically the same results if you replaced your chief investment officer with some old people who play video slots all day?"

I am just not really clear on the role JPMorgan has in a healthy and functioning economy, whether it is making billions in high-stakes gambling or losing billions in high-stakes gambling. It seems like America was actually doing pretty well with there not being any such thing as credit-default swaps, which JPMorgan invented, in the 1990s, right before investment banks were allowed to merge with retail banks and do whatever they wanted with everyone's money.

I'd also like Mr. Dimon to have to explain whether he knew he was about to have to admit to losing billions of dollars when, on May 3, he complained about the "discrimination" faced by bankers. Dimon also argued a few days later that the economy would've added twice as many jobs in the last 24 months if it weren't for a "constant attack on business" from various unnamed hippies and government bureaucrats. I would like to know how many jobs were created when JPMorgan accidentally lost some unknown amount of money that is likely to end up being more than $2 billion? Also did Dimon lie during his first-quarter earnings call last month, or did he have no idea what sort of things his chief investment office was up to (even after their actions were reported in the press)? If he didn't have any idea, shouldn't he maybe step down to run a smaller bank, where he can keep a closer eye on everything? Dimon said initially that the stuff that lost all the money wouldn't have violated the Volcker Rule, even though it plainly violates the spirit of the Volcker Rule but also he's not sure if the bank broke any laws? Jamie, I think maybe you should consider retirement; this bank is too complicated for you.

Dimon gets so defensive when people trash banks and bankers because he thinks his bank makes the world a better place. He thinks that JPMorgan making as much money for itself as possible is good for everyone, because capitalism. Much as today's super-rich, the .01 percent who are largely CEOs and financial industry professionals, are a bunch of rentiers who've convinced themselves that they are job-creating titans of industry, Dimon has convinced himself that his firm is making our economy function better instead of just playing incredibly complex computer games with unimaginable sums of other people's money.

So let's haul him before a judge (I would be fine with Judge Judy) and ask him to explain, without jargon, what positive role JPMorgan plays for the American and world economies that a few much smaller, less leveraged firms couldn't also play while not being at risk of losing billions of dollars by accident in a "hedge" and sending world markets reeling.

I mean, I'm sure he'd never admit to any sort of culpability for our current morass (it's the gubmint's fault!) because he clearly believes his own bullshit and he's never faced any sort of serious challenge to his viewpoint, but it still might be very good television.