After a disastrous showing in a regional election, the German leader's party is at risk -- and so is Euro stability 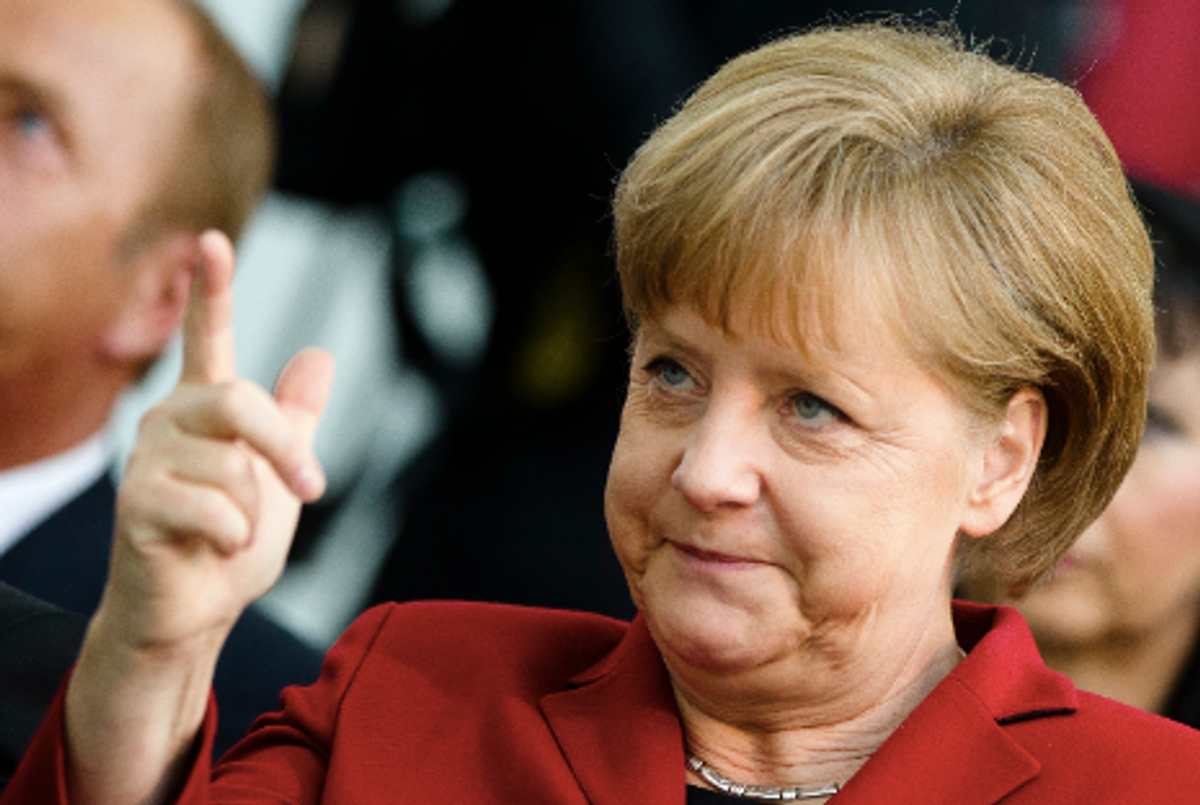 BERLIN, Germany – It is a paradox of German politics that Chancellor Angela Merkel remains overwhelming popular, while the parties that make up her governing coalition lurch from one defeat to the next in a string of regional votes.

That was made evident yet again on Sunday when her conservative Christian Democrats (CDU) suffered their worst ever result in Germany’s most populous state of North-Rhine Westphalia. The party only managed to get just over 26 percent of the vote in the snap election, shedding almost 9 points since securing 35 percent in the last vote there in 2010.

Her junior coalition partners the Free Democrats did manage an impressive comeback, securing a surprise 8 percent and managing to return to the state parliament thanks to its dynamic leader in the state, Christian Lindner. However, the disastrous performance by the CDU will allow the Social Democrats and Greens to form a stable coalition, after operating as a minority government for the past two years.

The SPD won 39 percent of the vote in what had been its traditional heartland, largely thanks to the huge popularity of its leading candidate, state governor Hannelore Kraft. The Greens only fell back slightly, down from 12 to 11 percent, a relief given the strong showing of the Pirates who stormed into their fourth regional parliament after securing almost 8 percent. The post-communist Left Party only attracted just over 2 percent, compared to over 5 percent in 2010, and thus failing to enter parliament.

North Rhine-Westphalia is often a strong indicator of the national mood. When former SPD Chancellor Gerhard Schroeder suffered a defeat there in a state vote in 2005 he called an immediate snap general election, which paved the way for Merkel’s rise to power.

Now, seven years later, could the bruising defeat in that state again be a harbinger of change at the federal level?

Even though the CDU had been braced for defeat on Sunday, the extent of the drubbing left the party reeling. “We have been bludgeoned,” said Peter Altmaier, the CDU’s chief whip in the Bundestag, on Sunday.

Their campaign had been a disaster, with their leading candidate Norbert Roettgen infuriating voters by failing to commit to giving up his current job as federal environment minister to lead the state opposition if the CDU were defeated. As such yet another possible internal rival to Merkel has been eliminated. Yet this also signals a defeat for a man who represented the moderate center of the party, and particularly for a possible coalition with the Greens.

While the CDU in North Rhine-Westphalia are left to lick their wounds, Merkel and the party strategists in Berlin will have to assess the vote's significance for the party’s chances of holding onto power after next year’s federal election.

The party had been working on the assumption that the FDP would continue to implode and that the CDU would need to form a new alliance either with the SPD or with the Greens, who it was assumed would fail to muster enough support for a coalition of their own.

Now the victory in a state that is home to one in four Germans points to a possible resurgence of the SPD and Green alliance. However, it might be unwise to assume that the parties could achieve a similar result on a national level and revive their coalition of 1998-2005.

After all much of the victory on Sunday is being attributed to the successful duo of the SPD’s Kraft and the Green party leader and deputy governor Sylvia Loehrmann. The two women worked extremely well together, managing to form alliances with the other parties on a range of issues, and seemed to present a less harsh, more socially oriented governing style. “We put people at the heart of this election campaign,” Kraft said on Sunday.

The SPD at a national level is far less popular, and it has still not decided who will challenge Merkel at the next federal election. The current troika of leaders, Peer Steinbrueck, Frank-Walter Steinmeier and Sigmar Gabriel lack the common touch and warmth displayed by Kraft. They are also more associated with the severe welfare cuts and labor market reforms of the previous SPD-led government, which alienated much of the party’s traditional base.

While Kraft is increasingly being touted as a possible rival to Merkel in 2013 based on her triumph on Sunday, she has so far insisted that she has no desire to switch to federal politics.

Nevertheless the North Rhine-Westphalia election has given both the SPD and Greens a much needed boost. The SPD suffered its worst ever election defeat in the federal election of 2009, attracting only 23 percent of the vote and it has struggled to make headway against the ever popular Merkel.

Their strong performances both in North Rhine-Westphalia and in Schleswig-Holstein the previous week could encourage the opposition to be more forthright in demanding more concessions from Merkel when it comes to her austerity policy in Europe.

Merkel needs a two-thirds majority in the Bundestag in order to ratify the so-called “fiscal compact” which would see EU states commit to strict budget discipline.

The SPD and Greens, already emboldened by the victory of Socialist Francois Hollande, are demanding that the vote be delayed until the French and German leaders agree to some form of growth package to complement the fiscal rectitude ordained by the pact. While the SPD and Greens have largely backed Merkel’s euro policies, they are increasingly complaining that concentrating on austerity alone is not only failing to cure the euro zone’s ills but proving to be counter-productive.

While Merkel has insisted that no more debt can be taken on as part of any growth package, Hollande’s victory and the defeat in North Rhine-Westphalia may prompt her to show more flexibility on going beyond strict austerity in Europe. However, she has insisted that any growth strategy cannot be achieved by taking on more debt and she will not see the pact itself renegotiated, considering that it has already been ratified by a number of countries as is up for a public vote in the Irish referendum on May 31.

What remains to be seen is whether Merkel’s clout in Europe will be affected by her party’s election debacle back home.

After all, the austerity versus growth debate was very much a part of the North Rhine-Westphalia campaign, with the CDU campaigning on the merits of belt-tightening and budget consolidation, while the SPD and Greens advocated a looser approach to state finances.

Kraft’s government had fallen over its budget, which envisaged taking on more debt in order to help out cash-strapped cities dealing with the long-term effects of post-industrialization in a state which has a long tradition of steel production and mining. Roettgen had sought to portray the SPD and Greens as profligate spenders, not unlike the much maligned southern Europeans. In North Rhine-Westphalia at least, it seems German voters were happy to see the purse strings eased.

Nevertheless, polls still show that over 60 percent of Germans do not want growth policies in Europe to involve taking on more debt. And around the same number approves of Merkel’s firm handling of the euro crisis.

Yet, that popularity it seems is not translating into support for her party, despite a relatively strong economy and the lowest unemployment levels in 20 years. And if the euro crisis starts to really impact the German economy, then Merkel’s own popularity, never mind that of her party, could rapidly evaporate.