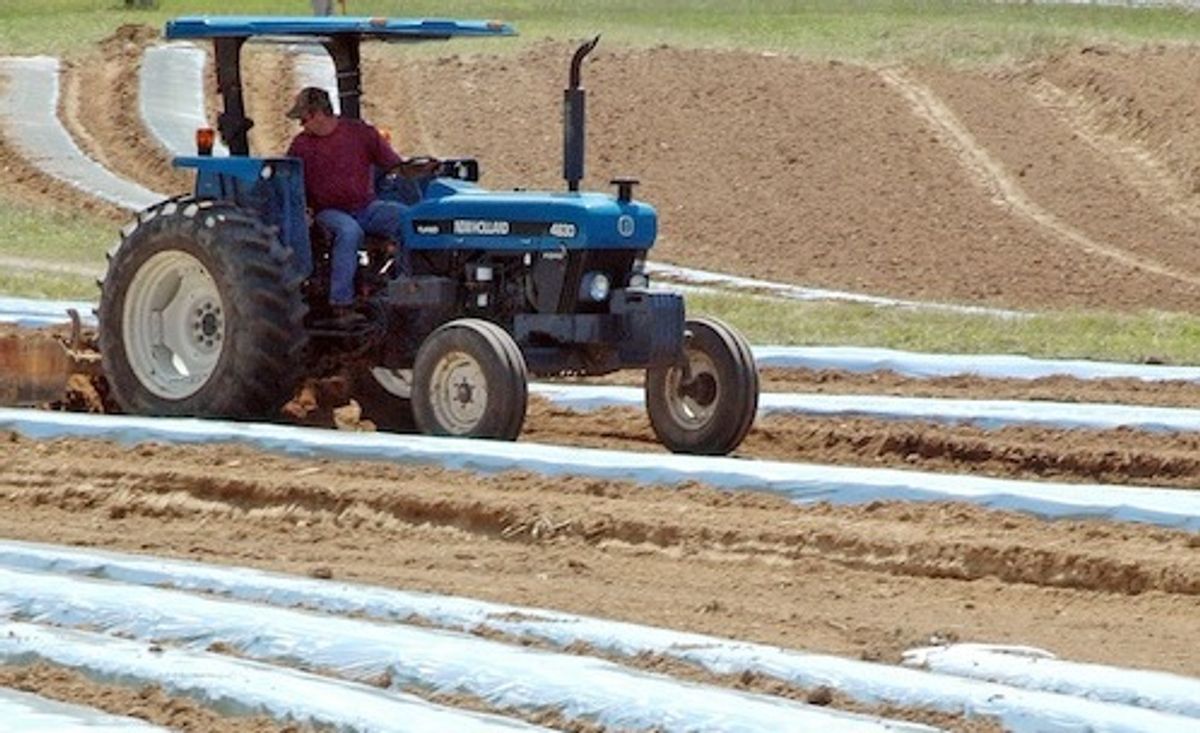 Here’s what happens when corporations begin to control education.

"When I approached professors to discuss research projects addressing organic agriculture in farmer's markets, the first one told me that 'no one cares about people selling food in parking lots on the other side of the train tracks,’” said a PhD student at a large land-grant university who did not wish to be identified. “My academic adviser told me my best bet was to write a grant for Monsanto or the Department of Homeland Security to fund my research on why farmer's markets were stocked with 'black market vegetables' that 'are a bioterrorism threat waiting to happen.' It was communicated to me on more than one occasion throughout my education that I should just study something Monsanto would fund rather than ideas to which I was deeply committed. I ended up studying what I wanted, but received no financial support, and paid for my education out of pocket."

Unfortunately, she's not alone. Conducting research requires funding, and today's research follows the golden rule: The one with the gold makes the rules.

A report just released by Food and Water Watch examines the role of corporate funding of agricultural research at land grant universities, of which there are more than 100. “You hear again and again Congress and regulators clamoring for science-based rules, policies, regulations,” says Food and Water Watch researcher Tim
Schwab, explaining why he began investigating corporate influence in agricultural research. “So if the rules and regulations and policies are based on science that is industry-biased, then the fallout goes beyond academic articles. It really trickles down to farmer livelihoods and consumer choice.”

The report found that nearly one quarter of research funding at land grant universities now comes from corporations, compared to less than 15 percent from the USDA. Although corporate funding of research surpassed USDA funding at these universities in the mid-1990s, the gap is now larger than ever. What's more, a broader look at all corporate agricultural research, $7.4 billion in 2006, dwarfs the mere $5.7 billion in all public funding of agricultural research spent the same year.

Influence does not end with research funding, however. In 2005, nearly one third of agricultural scientists reported consulting for private industry. Corporations endow professorships and donate money to universities in return for having buildings, labs and wings named for them. Purdue University's Department of Nutrition Science blatantly offers corporate affiliates “corporate visibility with students and faculty” and “commitment by faculty and administration to address [corporate] members' needs,” in return for the $6,000 each corporate affiliate pays annually.

In perhaps the most egregious cases, corporate boards and college leadership overlap. In 2009, South Dakota State's president, for example, joined the board of directors of Monsanto, where he earns six figures each year. Bruce Rastetter is simultaneously the co-founder and managing director of a company called AgriSol Energy and a member of the Iowa Board of Regents. Under his influence, Iowa State joined AgriSol in a venture in Tanzania that would have forcefully removed 162,000 people from their land, but the university later pulled out of the project after public outcry.

What is the impact of the flood of corporate cash? “We know from a number of meta-analyses, that corporate funding leads to results that are favorable to the corporate funder,” says Schwab. For example, one peer-reviewed study found that corporate-funded nutrition research on soft drinks, juice and milk were four to eight times more likely to reach conclusions in line with the sponsors' interests. And when a scrupulous scientist publishes research that is unfavorable to the study's funder, he or she should be prepared to look for a new source of funding.

That's what happened to a team of researchers at University of Illinois who were funded by a statewide fertilizer “checkoff” after they published a finding that nitrogen fertilizer depletes organic matter in the soil. Checkoffs are a common method used to market agricultural products, and they are funded by a small amount from each sale of a product – in this case, fertilizer. Richard Mulvaney, one of the U of I researchers, feels it is twisted that, in this way, farmers fund research intended to promote fertilizer use with their own fertilizer purchases.

But often the industry influence may be more subtle. Joyce Lok, a graduate student at Iowa State University, said, “If a corporation funds your research, they want you to look at certain research questions that they want answered. So if that happens it's not like you can explore other things they don't want you to look at... I think they direct the research in that way."

John Henry Wells, who spent several decades as a student, professor and administrator at land grant universities sees it a different way. As an academic, he hopes that his research is relevant to real world problems that agriculture faces at the time. “When you ask the question, did I ever outline a research plan with the explicit notion of is this going to be fundable, I would say no. But I thought very deeply about whether my research plan was going to be relevant, and one of the indicators of relevancy would be if the ideas I put forward would get the attention of trade associations, private industry, benefactors, etc.”

If scientists use fundability as an important criteria of selecting research topics, research intended to serve the needs of the poor and the powerless will be at a disadvantage. However, Wells says that this is hardly a new phenomenon: land grants have existed to serve the elites since their creation in the 19th century.

Land grant universities and the USDA itself first came into being at a time when the academic view of agriculture was fundamentally changing – even if most farmers at the time ignored the advice of academics, dismissing them as “book farmers” who knew little about actually working the land. Will Allen writes about this period in his book "The War on Bugs," telling the story of Justus von Liebig, a prominent agricultural chemist in Germany.

“In the 1830s, Liebig began asserting that the most essential plant nutrients were nitrogen, phosphorus and potassium. His theories fueled the development of chemical fertilizers and ushered in a new age of agricultural science and soil chemistry in the 1840s and 1850s. Though many of Liebig's theories were wrong, he was the first great propagandist for chemistry and for chemical-industrial agriculture.” Perhaps the most significant of his mistakes was his belief that organic matter in the soil was unimportant.

Dozens of Americans studied under Liebig and returned to the U.S. to continue their work. Two of these students established labs at Harvard and Yale, and soon “all agricultural schools and experiment stations in the country followed their lead.” Thus, practically from the start, the elites in this country served the interests of those who peddled chemical fertilizers and other agricultural inputs – even if that wasn't their intent. No doubt many were enticed by the prospect of founding a new, modern, scientific form of agriculture, as they felt they were doing.

The unholy trinity of industry, government and academics promoting industrial agriculture and de-emphasizing or dismissing sustainable methods has a long history and it continues today. In its report, Food and Water Watch advocates a return to robust federal funding of research at land grant universities. But government is hardly immune from serving the corporate agenda either.

Take, for example, Roger Beachy, the former head of the National Institute of Food and Agriculture (NIFA), the agency in the USDA that doles out research grants. Beachy spent much of his career as an academic, collaborating with Monsanto to produce the world's first genetically engineered tomato. He later became the founding president of the Donald Danforth Plant Science Center, Monsanto's non-profit arm, before President Obama appointed him to lead NIFA.

As Schwab noted, policy is often based on research, but good policy requires a basis in unbiased, objective research. In a system in which corporations and government both fund research, but due to the revolving door, the same people switch between positions within industry, lobbying for industry, and within government, what is the solution?