Paul-ites wreak havoc at yet another GOP state convention, and this time their victim is Mitt Romney’s son 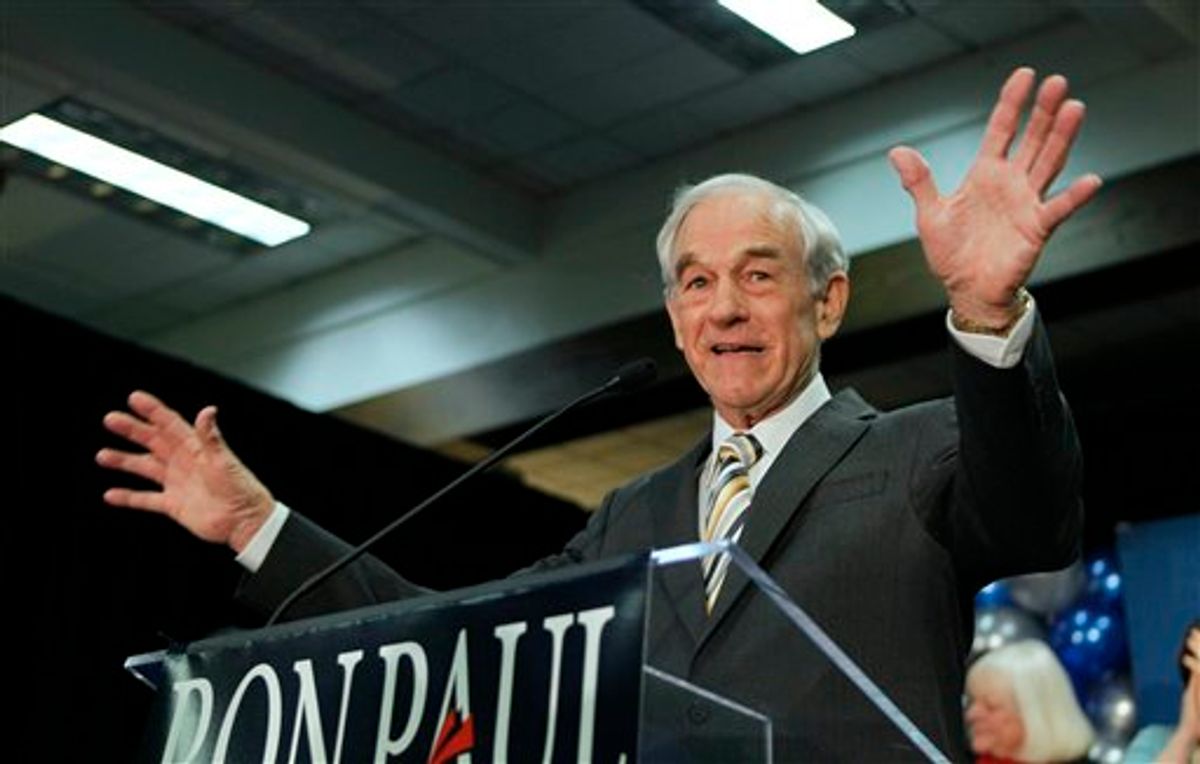 This weekend brought another reminder of the real threat that Ron Paul and his supporters pose to Mitt Romney: chaos in Tampa, Fla.

As they’ve done elsewhere, hundreds of supporters of the libertarian congressman descended on Saturday’s state Republican convention in Arizona, which was being held to choose delegates to the party’s national convention. The state’s delegation will be pledged to support Mitt Romney, who easily won Arizona’s Feb. 28 winner-take-all primary, in Tampa, but there’s nothing to prevent Paul-ites from packing state conventions and gobbling up delegate slots, even if they won’t actually be able to vote for their candidate.

What the Paul crowd can do, though, is make noise – loud, uncontrollable noise that disrupts the proceedings and gives the media something to play up. Exhibit A: The headline from the Arizona Republic’s story about Saturday’s convention: “Arizona Ron Paul supporters boo Romney’s son off stage.”

There’s some dispute over the accuracy of that headline, which was mimicked by leading national publications. According to the Republic’s report, Josh Romney, who was representing his father’s campaign at the convention, “had to stop repeatedly as people booed and yelled for Paul.” But some Paul supporters say Romney was only jeered when he encouraged attendees to support his father’s slate and that he wasn’t forced to leave the stage. The video that’s available doesn’t clear things up.

Not that it really matters: Whether it was over and over again or just once, the bottom line is that Paul’s crowd loudly booed the son of their party’s presumptive nominee. And it’s hardly the first time something like this has happened at a state convention. When they seized control of Alaska’s convention last month, for instance, pro-Paul attendees heckled two United States senators, Lisa Murkowski and John Barrasso, who were there to speak. That too made national news.

Similar behavior by Paul backers in Tampa could spoil what for the Romney campaign is supposed to be a nationally televised infomercial. The problem for Romney and convention organizers is that, short of giving up and letting Ron Paul have the nomination, there’s not much they can do to pacify the Paul-ites.

Under the extreme worst-case scenario for Republicans, Paul supporters end up with a giant share of the delegate slots (a quarter of them, say) and launch a four-day heckle-fest, bitterly resist any effort to quiet them or evict them from the hall – a modern version of the chaos that reigned inside Chicago's International Ampitheatre at the Democrats’ 1968 convention. In a more optimistic scenario, there’s only limited booing from a handful of delegates, and it rates on the nuisance scale somewhere near the annoying air horns that were a little too audible during Ronald Reagan’s 1980 acceptance speech in Detroit.

The good news for Republicans is that Paul himself will have an incentive to help them, since he’s interested in his son Rand’s long-term political viability and probably won’t want the family name forever associated with a destructive national convention. So if his supporters get too exuberant in Tampa, Paul might simply express to them how important he believes it is that they treat speakers with respect – sort of like when a rowdy crowd at a sporting event starts to disrupt the game and the home team’s coach steps in to quiet them down. Here’s former Cincinnati Bengals coach Sam Wyche with a lesson in how it’s done: